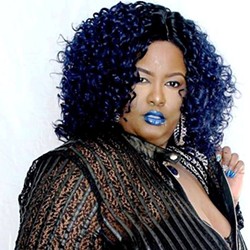 Detroit native and recording artist Lay'na Michelle has been writing music since the age of 3.

"If my mother was here right now, she would sing a couple of verses from the first song I ever wrote called 'Save the Bunny,'" Michelle says.

Michelle says that she writes as a form of therapy: She suffers from PTSD-induced seizures that developed after she didn't seek proper therapy following a sexual assault at the age of 17. The National Women's Study reported that almost one-third of all rape victims develop PTSD sometime during their lives and 11 percent of rape victims currently suffer from the disorder.

"I didn't even know that I had PTSD until I ended up in the ER and was told that I never properly dealt with my assault," she says.

Michelle's latest album, Blue Dream Ave, is a shoutout to a strain of medical cannabis that she uses to help deal with the symptoms of PTSD. She says the album's title track was originally planned to be an intro to the album, but after receiving great feedback from Detroit's ballroom dance scene, she decided to make it into a full song.

"My writing process is very laid back," Michelle says. "I usually take my medicine, get into my zone, and whatever I feel, I write. My music is mood music."

Michelle says she gets a lot of inspiration from none other than the "Queen of Soul," Aretha Franklin. She said that she remembers Saturday mornings where she would wake up and hear Franklin's music playing, she knew it was her auntie, and time for her to get up and clean the house. "Rest In Peace auntie Re-Re," she says.

The R&B artist says that of all of her performances, her favorite was at a Detroit Pistons game. The artist made history when she became the first African American independent artist to perform at a Pistons game at the new Little Caesars Arena.

"To find out that I did something that no one else has done meant a lot to me," she says. "Wow, you know? This is something that my children, my grandchildren and far on, will be able to say I know the lady that did that."

Michelle's Pistons performance also earned her placement as part of an exhibit at Detroit's Charles H. Wright Museum, an honor she described as "surreal."

"I did not expect it to ever go like this," she says. "When I saw the exhibit, I said this is really my calling. I told my husband and parents that I would be in the Charles H. Wright Museum. I didn't know what for, so to see myself there now is amazing."

Michelle doesn't compare herself musically to any other artist, but if given the chance to work with anyone in the industry, she says it would be Lizzo. "Her BET award show performance gave me life!" Michelle says. "She represents for the big girls — and she's talented."

The artist supports the plus-size community and has been honored by ThickNation.org, a plus-sized organization with the foundation of family, unity, leadership, size acceptance, empowerment, and giving back to the community. The site has honored Michelle with an award for Entertainer of the Year and another for Album of the Year.

"I want to expand my brand, showing that no matter what size you are, that you can do whatever you want to," Michelle says. "Don't let your weight hold you back. It's all about how you feel in your mind," she added.

In addition to advocating for the plus-size community, Michelle also uses her platform to push for equal pay and opportunity for independent artists.

"I don't accept just anything. It's all about negotiations. If a promoter tells me that they don't pay independent artists, I tell them to look at my résumé," she says. "I tell all artists to negotiate. Don't accept an offer just because it may gain you exposure. You know your worth. You know what you've done. Always be humble, but make sure that you express that to the promoter: I'm an artist for hire."

She says that growing up in Detroit, her parents sheltered her and music became an outlet. "My mother always encouraged me to write," she says. "Whether I was mad or sad, she told me to write down how I felt and I'm so happy that she did. Look at me now."

Lay'na Michelle performs at this year's Detroit Ribs and R&B Music Festival with headliners Avant, Vivian Green, and Jon B. The festival takes place from 11:30 a.m.-midnight Friday, Aug. 9 through Sunday, Aug. 11 at Hart Plaza; ribsrnbmusicfestival.com. Festival is free until 5 p.m. on Friday ($5 after), free until 2 p.m. Saturday and Sunday ($5 after), $10 after 8 p.m.

« Woodstock in the D is the closest we’ll get to celebrating Woodstock’s 50th   |   After a rocky road, the Ann Arbor Blues Festival is back just in time to celebrate its 50th anniversary »