While getting ready to head over to the "Keep Families Together" rally protesting the Trump administration's immigration and family separation policies on Saturday, June 30, I made sure I was prepared for the 90-plus degree weather. Water bottle, straw hat — check. But then it occurred to me that maybe I should carry my passport just in case I have to prove I'm a citizen.

It's come down to that. Who knows if there would be agents in the crowd, or some kind of roundup taking place? The day before nearly 600 people had been arrested at the Women Disobey rally in Washington, D.C. That's something people, particularly dark skinned people, have to think about these days. I grew up watching movies in which scary sounding Nazi Gestapo agents were always asking for somebody's "papers." More and more often I make sure I have my papers on me when I'm moving about.

As it turned out, when I joined some 1,200 to 1,500 people at Clark Park in the heart of Detroit's historically Hispanic neighborhood I didn't need a passport — although it seemed that from the number of people carrying signs that those might be required. And if you didn't have a sign, you could easily get one or help someone else hold up their banner. 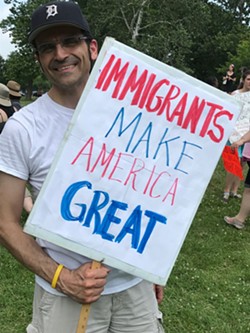 The program featured a number of great speakers on a number of aspects of this Trumpian offensive against immigrants and a number of citizens. There were three children whose mother has been deported who graced the stage along with a number of others activists. While those were crucial statements, it seemed that everybody there had something to say. There were fervent speeches being made on every placard and banner on display there. Well, some of it was on people's attire, such as the "I really do care, do you?" response to Melania Trump's "don't care" jacket.

But it was the signs that made the statements of the day. One delightful rendering said it all so eloquently in one word: "RUMP." A simple deconstruction of his name placed the president exactly in the part of the anatomy where so many feel he belongs. Short even by Twitter standards, I have to admire the ability to communicate in shorthand (or with small hands).

"IMMIGRANTS MAKE AMERICA GREAT" was another wonderful sentiment. This gets into some testy territory, because not only do immigrants make America great, but immigrants made America, period. Were it not for immigrants, this country would not exist. Apparently immigration is only all right if it happened a long time ago, and the immigrants were from Europe.

Had the Native Americans had a policy like the ones coming from Washington, D.C. these days, they would have sent those Euro adventurers right back where they came from. Instead, they trusted some of the most vicious, violent, and greedy people in the world — and paid for it dearly by nearly getting wiped off the face of the earth. And speaking of Trump's suggestion that Mexico is sending criminals here — well, the British sent criminals here on the Mayflower among the Pilgrims.Speaking of Native Americans, one sign printed with "A NATION OF LAWS" detailed laws "that we regret" — such as the Indian Removal Act of 1830, the fugitive Slave act of 1850, and Public Law 503 of 1942 (Japanese internment). All of this goes to show that acts of unspeakable cruelty can all be very legal. George Zimmerman, the man who killed teenager Trayvon Martin in 2012, stood on sympathetic legal ground due to Florida's stand-your-ground law. As another sign pointed out, "Everything HITLER did in Germany was legal." Hmmm.

Moving on, "ICE BELONGS in the FREEZE" was a very popular sentiment. In fact ICE caught a lot of comments, with signs reading "NO to ICE," "Melt ICE, Not Icecaps," and the punchy "No WALL, No JAIL, No ICE." On a day that was so hot I wanted ice, I had to remind myself that this ICE is the Immigration and Customs Enforcement Agency that has been cruelly separating children from their parents when they come to the border seeking asylum. A terrible thing — or as one sign reminded us, "This is not normal, This is not okay."There was a great conversation going on with the signs, though one of the most welcome signs on this sweltering day of action was "Free lemonade + voter registration." That pretty much works in tandem with those that read, "Remember their cries in November," and "make your voice count, VOTE." Those point to the strongest solution we have at hand — vote for people who oppose the Trump administration's policies in this fall's election. Vote, vote, vote. The best way to beat the vote suppressors is to get up and vote.

And just to remind us of the immorality of the problem we are facing, one sign put it this way, "Heaven help the man who kicks the man who has to crawl." As it stands now, it could be a case of heaven help us. That help will come in the form of a wall of voters standing between us and the Rump.

One final note: I ran into an old political activist friend while out there and we spoke about the relatively few black faces we saw in the crowd. I just have to say this about that: Don't worry brothers, just chill out. After they have all the immigrants interred, they're coming for you. That wasn't on a placard, but all signs point to it.

Slideshow: All the signs we saw at the ‘Families Belong Together’ rally in Detroit’s Clark Park