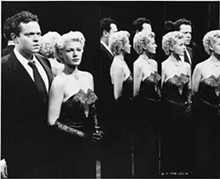 Moviegoers can take a step back in time Sept. 23-25 as the Noir City Film Festival makes its way to the Redford Theatre.

The festival, dedicated to showing rare 35mm prints of crime and detective films of the 1940s and 1950s, will feature at least two films on each of its three nights. Saturday will showcase a triple feature, with Double Indemnity and The Prowler preceding a special screening of Blue Velvet to commemorate the film's 30th anniversary.

Other options include The Killers and 99 River Street on Friday, and The Lady From Shanghai and Woman on the Run on Sunday.

"I couldn't be more excited about it," says John Monaghan, curator at the theater and Detroit Free Press film critic.

"I'm passionate about the films because they hold up so well. They're gritty and they're funny and they're dark, and they're super well-constructed in terms of film technique and lighting."

Watching the films in 35mm is an added treat, Monaghan says. The Redford is the only theater in Michigan and one of just a few in the country that regularly shows 35mm prints.

"The black-and-white is going to look stunning in the 35mm prints we've obtained," he says.

"One of the goals for the Redford, for me, is to keep showing 35mm rather than digital, especially for the film noir, because it does make a difference. It's tactile. It's light shining through film, the way it was when it was released."

Even the projectors that will be showing the films are from the 1950s.

"It's a pretty authentic presentation of the films as they would have been (shown) in the theater," Monaghan says.

Film noir turns 75 this year — an anniversary that was featured in a recent edition of Time magazine.

"It's not just a little niche anymore," Monaghan says.

Eddie Muller, founder and president of the Film Noir Foundation, has built a following through the format, appearing on Turner Classic Movies each Friday during its summer 2015 series Summer of Darkness. Muller — dubbed the "Czar of Noir" — will introduce each film during the festival.

"He's not just academic. He has a lot of passion. He helps people understand why these films panned out."

Each night features a more well-known film paired with an obscure film — two of which are so obscure that Monaghan has yet to see them.

"I'm saving that experience for seeing it with the audience," he says. "Personally, I'm excited about what he's bringing."

"We've made it really reasonable for people to come to everything," he says. "This is really something we'd like to keep going."

Tickets are $10 for each double feature, $7 for the Blue Velvet screening or $25 for an all-access pass, which will include a coffee session with Eddie Muller prior to the Sunday program. Films begin at 7 p.m. on Friday, Sept. 23 and Saturday, Sept. 24 and 3 p.m. on Sunday, Sept. 25 For more information, visit RedfordTheatre.com or Facebook.com/NoirCityDetroit.

« ‘Ray Johnson: The Bob Boxes’ spills forth at CCS   |   Local dancer examines the art of the hustle »