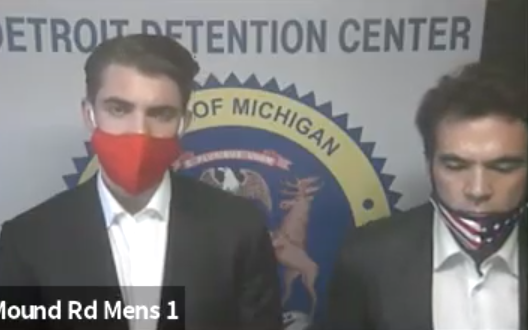 Two right-wing fraudsters charged in an alleged robocall scheme to spread misinformation in order to intimidate Black voters in Detroit and other cities were ordered Wednesday to call back the victims and admit the messages were false and illegal.

Calling the voter-suppression scheme “electoral terror” that harks back to the days of the Ku Klux Klan, U.S. District Court Judge Victor Marrero ordered Jacob Wohl and Jack Burkman to make the follow-up calls by 5 p.m. on Thursday or face contempt of court charges.

“The means Defendants use to intimidate voters, though born of fear and similarly powered by hate, are not guns, torches, burning crosses, and other dire methods perpetrated under the cover of white hoods,” Marrero wrote in the order. “Rather, Defendants carry out electoral terror using telephones, computers, and modern technology adapted to serve the same deleterious ends.”

Marrero ordered the duo “to issue a message to all recipients of the robocalls informing them about this Court’s finding that Defendants’ original message contained false statements that have had the effect of intimidating voters, and thus interfering with the upcoming presidential election, in violation of federal voting-rights laws.”

Wohl, 22, and Burkman, 54, were arraigned in 36th District Court on Oct. 8 with charges of intimidating voters, conspiracy to commit an election law violation, and using a computer to commit the crime of conspiracy and election law. They are out of jail on $100,000 bond.

Michigan Attorney General Dana Nessel said Wohl and Burkman, who live in Los Angeles and Arlington, Va., respectively, made automated calls to about 12,000 Detroit and suburban residents in August, falsely claiming the personal information used on mail-in ballots could lead to arrests for outstanding arrest warrants or be used to collect unpaid credit card debts. The calls also falsely warned that the Centers for Disease Control and Prevention could use the information to track people for mandatory vaccines.

Nessel alleges the calls were intended to discourage voters of color from casting mail-in ballots.

Nessel applauded Marrero's decision "to correct the misinformation they disseminated."

"Voting is a cornerstone of our democracy and all voters should be able to cast their ballot without confusion or fear," Nessel said in a statement.

The duo also was charged in Ohio on Tuesday with similar charges for allegedly making robocalls in Cleveland and East Cleveland, both Democratic strongholds.

The National Coalition on Black Civil Participation sued Wohl and Burkman earlier this month under the Ku Klux Klan Act of 1871, accusing them of making robocalls targeting 85,000 voters in predominantly Black areas of Illinois, Ohio, New York, and Pennsylvania.

“This was a clear attempt at suppressing Black votes in the middle of a major general election,” Melanie Campbell, president and CEO of the National Coalition on Black Civic Participation, said in a statement. “The court has made clear that this campaign of racist, dangerous lies that was intended to discourage people from voting will not be tolerated. The voices of Black Americans will be heard.”

The robocall states: “Mail-in voting sounds great, but did you know that if you vote by mail, your personal information will be part of a public database that will be used by police departments to track down old warrants and be used by credit card companies to collect outstanding debts? The CDC is even pushing to use records for mail-in voting to track people for mandatory vaccines. Don’t be finessed into giving your private information to the man, stay safe and beware of vote by mail.”

Marrero ordered the tricksters to leave this message to robocall victims: "At the direction of a United States district court, this call is intended to inform you that a federal court has found that the message you previously received regarding mail-in voting from Project 1599, a political organization founded by Jack Burkman and Jacob Wohl, contained false information that has had the effect of intimidating voters, and thus interfering with the upcoming presidential election, in violation of federal voting-rights laws."

During their 36th District Court arraignment, Burkman’s attorney, Scott Grabel, called the charges a “political stunt” and insisted the robocalls are “protected speech.”

“It did not deter voters,” Grabel told the judge. “The charges are an absolute atrocity.”

Assistant Attorney General Richard Cunningham disagreed, saying the robocalls were intended to change “the outcome of the election.”

“We have a very strong case,” Cunningham said.

Wohl and Burkman have been removed from social media sites for making other bogus claims, including manufacturing sexual-assault allegations against former Democratic presidential candidate Pete Buttigieg and special counsel Robert Mueller. They also falsely claimed Elizabeth Warren had a sexual relationship with an ex-Marine male escort.