In ‘The Feeling of Being Watched,’ a Muslim community watches the watchmen 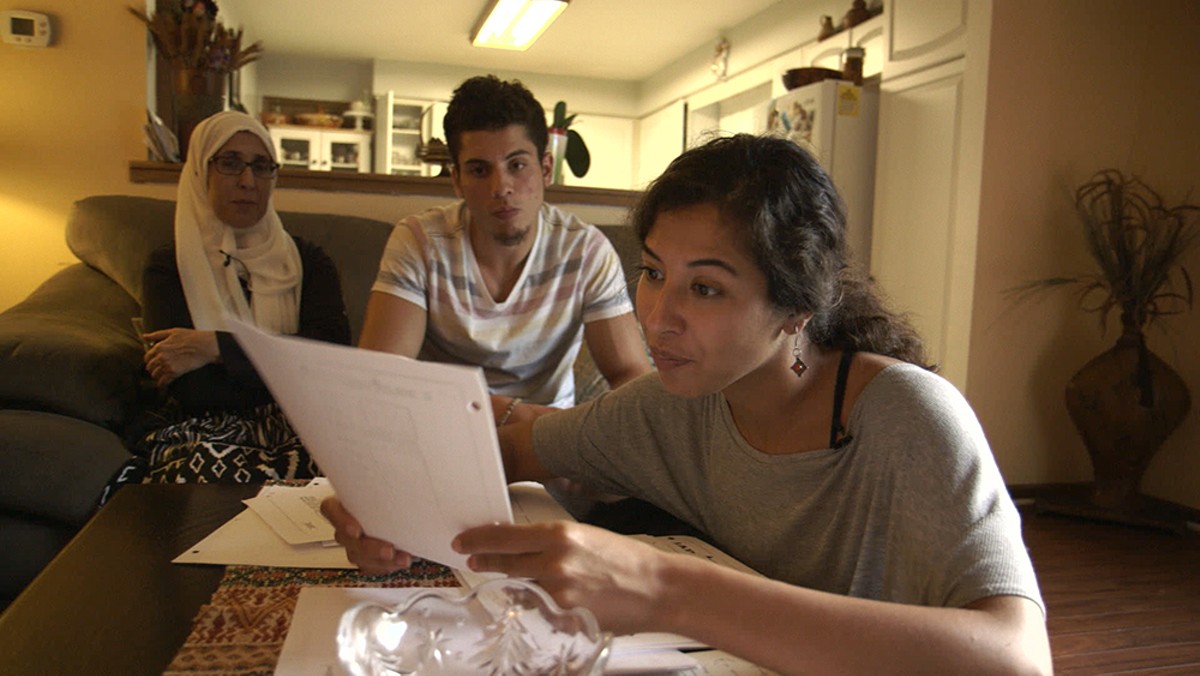 Assia Boundaoui shows FBI documents to her family in The Feeling of Being Watched.

The Feeling of Being Watched

If you were living in a small community riven by paranoia and fear of surveillance, pointing a camera at its members and asking them to recount their troubles might not seem the best idea. However, that's what Assia Boundaoui does in her new documentary The Feeling of Being Watched, which plays in a special screening at the Arab American National Museum — and with the filmmaker in attendance — this coming Thursday.

Working off the surprising notion that being recorded even more is exactly what her family's tight-knit Muslim community needs, Boundaoui confirms and confronts the disturbing allegation that the FBI has been watching its members for years — and started well before 9/11.

Reflecting frankly on a mid-'90s childhood marred by the program (known as Operation Vulgar Betrayal), Boundaoui interweaves her own anecdotes and anxieties with those of family, friends, and strangers around Bridgeview, Illinois — which plays host to a thriving, generous Muslim community. Though tormented by the FBI's door-to-door interrogations, hidden cameras, and false accusations (all leading to dead-ends, all done in the name of fighting domestic terrorism), Boundaoui's neighbors brighten the film's proceedings with their energy, good-humored cynicism, and cohesion as a community. Under such circumstances, that collective sense of solidarity is a considerable, palpable strength — as demonstrated when, shortly after Boundaoui's father's abrupt, early passing, the members of her mother's mosque come together in a span of just hours to help her pay off a new home. (Something of this communal aura of stubborn, activism-oriented concern seems to have inflected Boundaoui's project here.) All the same, their resolve is tested by the FBI's brazen and often clumsy telemarketer-scale harassment, which proves persistent enough to drive two close friends' fathers out of the United States altogether — rendering single mothers as one of the film's recurring motifs.

Directing with inviting, sometimes rough-hewn frankness, Boundaoui appears on camera often, allowing herself — as one deeply affected by the FBI's smug tactics (they rifle through residents' garbage totally undisguised) — to act as the nexus of the film's emotional and political concerns. She knocks on doors, asks tough questions, and complains about sometimes hating the grunt-work aspects of what she's doing. Mixing Dubois and Foucault together on double consciousness and surveillance, her narration can feel heavy-handed, but never egocentric — so natural and pressing is her investment in our government's intrusions on her life. "I am constantly seeing myself through two conflicting gazes," she confesses. "The eyes of myself and the eyes of a world that views me with fear and suspicion." This condition, as she describes it, is exasperated not just by her early knowledge (and feeling) of being watched, but by growing up Arab-American in the U.S. and meeting loaded jokes and suspicious questions throughout.

This widespread edginess makes her ability to investigate all the more impressive. Though FOIA-requested documents and furious interviews with government officials play a central role, it's the word-of-mouth stories of her community — and most prominently, of women who share the same feelings — that really drive things here. It's hard to imagine the women onscreen opening up (as many other potential subjects didn't, the director intimates) not just to a male interlocutor but to anyone outside their own neighborhood. After all, they might imagine, couldn't a "documentarian" or "journalist" easily be a disguised member of the FBI? Boundaoui seems to have intuited that only she could do this project this way — and so it's only natural that she embraces it as anxiety provoking and personal, emotionally driven and hyperspecific. And instead of burdening the project with ego, as one might expect, her instinct is a good one, and rings of truth.

The work done here is a kind of grassroots activism, enacted on a small scale, laborious and (in real life more than the film's brisk, clipped running time) evidently often boring; there's little gloss here on that. It's where The Feeling adopts familiar conventions that it seems least accessible; a neighborhood drone shot, some misplaced or overworked bit of scoring, an emphasis on a suspense thriller framework that's already implicit. These get away from the story's center, which is a quest for both personal and journalistic truth. It's hard to know how to behave when constantly performing, living in fear, and being looked at in regular way, much less with the FBI eyeing your actions — but it may be just as hard to do so on camera before an international audience. The fact that it's pockmarked in narration, persona, and direction may be distracting intermittently, but in light of what's at stake and with the director's forthright approach, it's also entirely natural.

Though much about the film is particular, personal, or political in either a hyper-local or broad sense, much else seems to approach a level of universal concern. We aren't all under threat of constant bother or legal action by the FBI, but at this point in time most know in some way the encroaching threat of surveillance. Whether it's done in the name of security, recreation, or commerce, we're lately observed often enough to forget to even note the feeling. What's satisfying about Boundaoui's project is her refusal to accept this, her determination to punch back, and her confident rallying of others to know and fight for their rights.

Boundaoui's camera is an equal-opportunity and very welcome aggressor, demanding the truth from herself and all around her: an ardent, angry response to years of provocation. Her approach works, and it doubles as something like collective therapy for the rest of us. In addressing our concerns via not just feeling but action too, she takes into her own hands the very notion of being watched — and with a level of boldness we'd all do well to emulate.

« Review: In ‘The Happy Prince,’ Rupert Everett is born to be Wilde   |   Review: Peter Farrelly's directorial debut 'Green Book' is about a real-life odd couple »