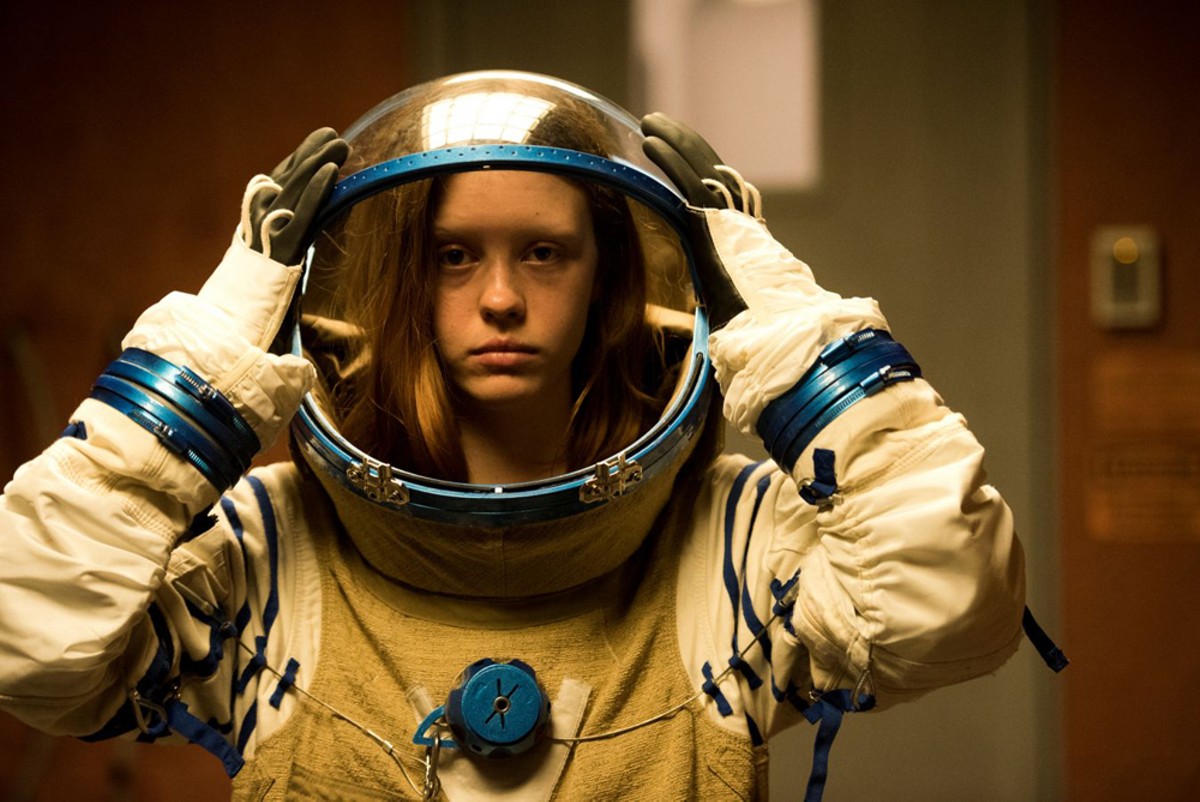 "Taboo, taboo" is the phrase Monte coos to his infant daughter toward the opening of High Life, a suggestive choice that reaches back and forth through the movie's splintered timeline. Monte and his daughter Willow are the last survivors of their spaceship's crew, played by Robert Pattinson amid a cast of able, unshowy, but memorable character actors (Juliette Binoche does the most of anyone).

The first science fiction (and the first wholly English-language work) from the septuagenarian, perpetually maverick director Claire Denis, High Life's woozy title ironizes its decidedly smutty proceedings. For one, the movie reeks not just of death but sex — its events, mostly relayed in flashbacks with a bit of Monte's voiceover, showcase the rivalries, power struggles, and assaults on dignity the crew partake in. The key wrinkle is that each member is a prisoner — most are principled murderers, sent on a potential suicide mission to investigate a black hole. That includes Juliette Binoche, who, as Dr. Dibs, conducts invasive experiments on the rest of the crew and seems to shrink the gap between science and magic, attempting to bring a baby to term aboard the ship by any means necessary.

The vibe is strongly existential; "constant acceleration creates artificial gravity," Pattinson intones, a painful articulation of technology's ability to create a false sense of stability. For throughout the story the characters are fairly groundless, and truly floundering; like Jordan Peele's Us, it's a case study in human nature, a movie about what circumstances can do to any one of us despite our self-perceptions. High Life shows human beings who are incredibly sympathetic yet starkly inhumane, the characters' hurtling forward while lashing out against each other a radiantly clear metaphor for our individual movements through life and time.

To that end, the movie's overtly philosophical dialogue can sometimes seem off-putting; characters detail their feelings and resignations about their lives in startlingly direct fashion, as befits their shared sense of abandon. Whether that's a matter of writing in a second language or a deliberate register (one that's convincing and fitting, if not lifelike), Denis' vision is elaborate enough that the characters' heavy, sincerely freighted words just scratch the surface of her themes. Here the iceberg stretches far below the sea.

But what's encased within? To me, High Life feels original and startlingly primal for the ingredients that make it up. With an Edenic garden onboard the ship (shades of Silent Running), its hyperfocused emphasis on sex and fertility and its voyage's destination in matter's clearest endpoint (the black hole), Denis draws a line through the timeline of human life only to scramble it in a nuanced, intuitive, and highly legible flashback structure — the better to get at the feelings such awareness conjures. Meanwhile, the ship's denizens are left with only subjugation — no proper civilization — literally attacking each other with cudgels over real or perceived slights.

In her visuals as in her structures, Denis finds beauty (if not prettiness) by never seeming to seek it out. This stretches from the ship's aesthetics to the way she lights it and beyond; dodging the all-white or bright-primaries color schemes that coat so much of science fiction, Denis opts for a shaggy, canvas-fabricked decor that the crew members literally have to stitch together to keep intact. (When not kept up, the ship decays as buildings do.) Denis lights all this in the kind of broad, flat lights that gesture both at sunsets and the monochrome filters of surveillance cameras; in one scene of Monte in bed with his infant daughter, the broad, unfocused light fades from violet into gold as it washes across their bodies and the room, burnished with orange highlights. Are we seeing humanity in twilight, and is that twilight now? We don't see a year stamped anywhere, but with the future-suggestive symbolism of both the child and the garden, Denis seems to demur.

If the existential awareness Denis signals is broad, her grasp of details and character is precise, as you can't court the infinite effectively without first dealing in the minute. Here, Denis takes science fiction's frequent subtexts of entrapment, repression, dehumanization, colonialism, and of spaceships' psychosexually penetrating, phallic subtexts — it doesn't take much to note the ship's movement toward a hole — and examines them in detail. With Binoche as its center of relative power, its potent sexual subtexts, traumas, power plays, class dynamics, and existential air of struggle beating furiously against resignation, High Life is at nearly every turn full of anarchic surprises in the manner of old adventure stories — the ones long before Joseph Campbell, long before they knew their present patterns. By interrogating the infinite through the harshly, painfully intimate, Denis gets at the stuff of life itself while proving there's no real difference.