Review: Does Como’s stack up against the old school Detroit-style pizzerias? 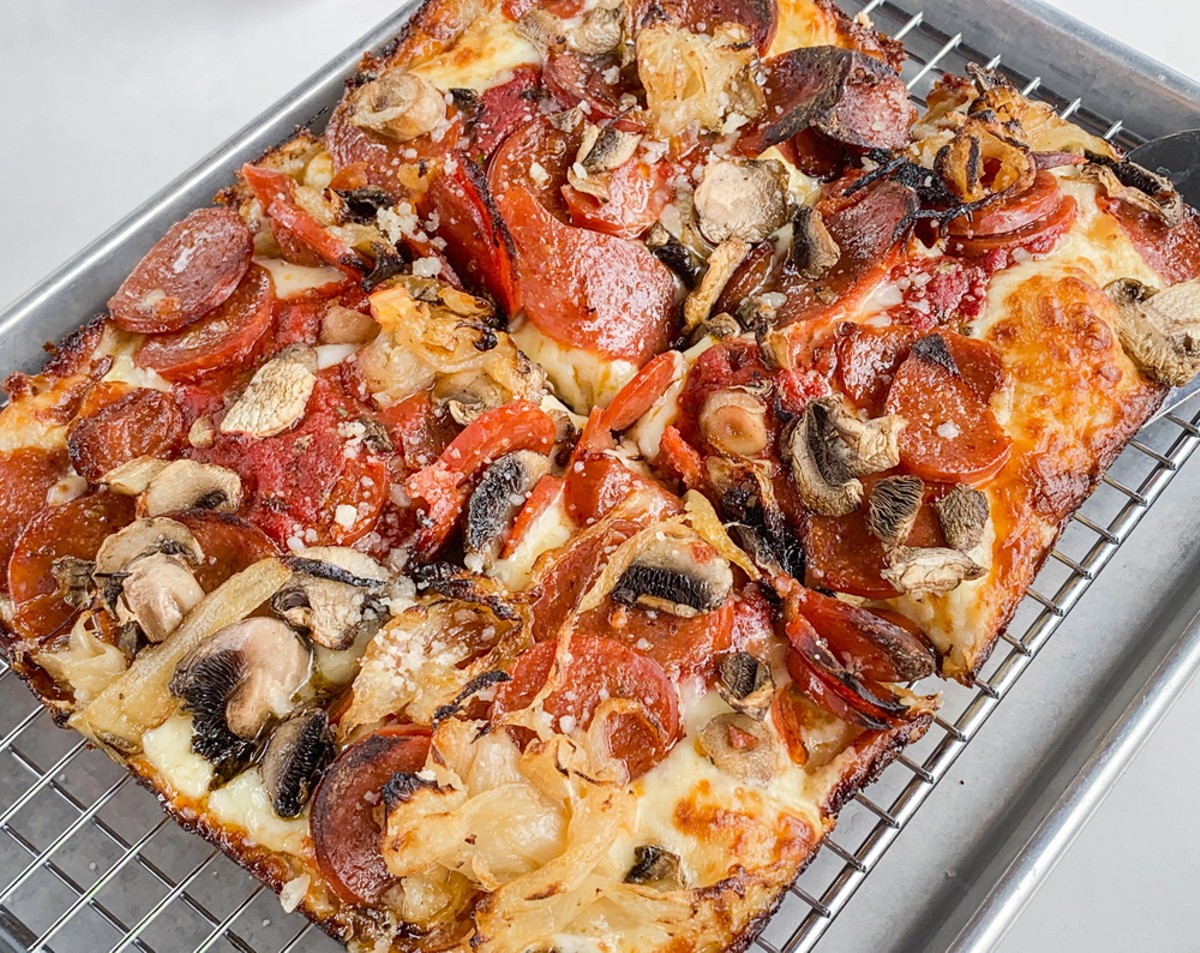 “The Granny” with pepperoni, mushrooms, and caramelized onions. Tom Perkins

Everyone was asking the wrong question ahead of the new Como's opening: "Is it going to be clean?!?"

Yes. Of course chef and co-owner Zach Sklar, who owns 10 restaurants, wouldn't take over a gross kitchen and just leave all the filth. That idea is absurd. The new Como's is squeaky clean, as most figured it would be.

There was actually a far more important question to ask: Can a young, new-school chef make Detroit-style pizza that hangs with that of the old masters at Loui's, Buddy's, and Cloverleaf? Detroit-style pizza is served spots that are far from the nearest cupcake emporium. Does Detroit-style pizza lose something when pulled from its original context and is made and served in a "hip" place like Ferndale? (Some who really want to stir shit up might even call it the gentrification of Detroit-style pizza.)

In short: Yes, Como's can hang. Sklar's pies check most of the Detroit-style pizza boxes. Its crust is dense and crunchy on the outside, but soft in the middle and altogether focaccia-like, though not quite as dense as that at Loui's. Super tasty caramelized cheese rings the edges, though there's perhaps not as much cheese as one finds on most Detroit-style pies, but that isn't to say it's lacking.

The toppings are slightly different than what we're used to — kale, black garlic honey, and marinated tomatoes, among others. The latter was part of an excellent pie with roasted garlic, crushed meatballs, and jalapeño. Crushed meatballs seemed a little suspicious — isn't this just ground beef? — but the meatballs here are much more. Como's also offers a short list of specialty pies, and two fine options are The LGBT (spinach, garlic, bacon, and tomato) and The Granny (pepperoni, mushrooms, and caramelized onions).

Unlike most other pizzerias, Como's dishes beyond the pizza are worth checking out. Sklar's chicken dish, for example, isn't just roasted pizzeria chicken. Instead, Como's Brick Chicken is two pieces of dark-meat bird with crispy, browned skin that arrives in a puddle of garlicky, sour greek yogurt that's mixed with crunchy red onions, avocado, and fresh herbs like dill and basil.

An incredible pasta plate is Social's Gemelli, borrowed from Sklar's other restaurant Social Kitchen and Bar. It's umami-heavy sauce is anchored by truffle in a mix of marinara, parmesan, Calabrian chiles, and stewed onions that's bolstered with cream. Yeah, truffle and cream. It's a crowd pleaser, super rich, and a rarity to find something of its caliber on a pizzeria menu.

Como's lunch menu holds the obligatory sub sandwiches, but it's hard to think of a pizzeria sub that's better than Sklar's muffaletta. The sandwich is difficult to find in Detroit outside of a few old Italian delis, and the olive tapenade is what sets it apart. Como's makes it fresh with a mix of olives, garlic, olive oil, and pepperoncini juice instead of pulling it out of a bucket, as is common.

The roasted cauliflower appetizer was the only real whiff. It comes mixed with honey-almond butter, chilis, raisins, hazelnuts, and capers. It's a busy dish full of counterpoints but no real center, rendering it unpleasantly atonal.

The meatballs, however, are hard to beat. The price could make one skeptical — $12 for three — but these are worth it. The light and fluffy balls are served in a slightly spicy, thick tomato sauce with a strong presence of smoked chili, heavy parmesan, bread crumbs, a dollop of creamy goat cheese, and fresh basil.

The Bibb & Beet salad was solid, and is advertised with arugula, candied pecans, corn, dates, carrots, goat cheese, beets, and lime-poppyseed vinaigrette. It worked, though ours arrived with no goat cheese and a spring mix instead of arugula. We ate it anyway, and a few minutes later a server arrived with a second Bibb & Beet. We explained that we had already received one, but noticed the second salad had goat cheese on it.

This was one of several signs of stress under the volume at Como's. The restaurant is chaotic during peak dinner hours, which isn't a bad thing for an upbeat place. But it crossed the line between good chaotic and bad chaotic. On a weeknight trip, it took 17 minutes for anyone to acknowledge us, and a dinner with four plates spanned two hours. We were told the restaurant was out of guacamole, but received a different dish with avocados, then were told staff didn't have time to make guacamole. The server that evening was super friendly but also super frazzled as he rushed between tables and spoke rapidly. Guests around us waited a long while for checks, and reviews in online forums suggest these type of issues aren't totally rare. That said, I'd return, I'll try to shoot non-peak hours. It could be the issues are simply a matter of the restaurant finding its footing, and it seems that an extra server or two, or perhaps someone to make the guac on busy nights, could help.

So where does Como's rank in the Detroit-style pizzeria order? Now that Buddy's is a chain with nationwide ambitions and its quality has been arguably diluted, it's safe to say Como's beats the genre's inventor. As for Loui's and Cloverleaf — well, maybe its pizza isn't quite there, but it's clear that there's room in the new world for Detroit-style pizza.