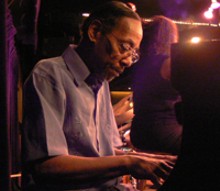 This could be the picture of a guy enjoying retirement. Kenn Cox is sitting in the family room of his west side Detroit home, dressed casually with a cold beer and a burning cigarette at hand. He's surrounded by his history and jazz history: the piano that his mother purchased for him is in the center of the room. Paintings that reference Duke Ellington and Lester Young hang on the wall.

But rather than talking about retirement, Cox says he's enjoying a sort of rebirth at 67. He's got a regular trio gig at Baker's Keyboard, he's excited about a new percussion-heavy combo ... and the Blue Note label recently reissued the discs that Cox and his Contemporary Jazz Quintet comrades recorded back in 1968 and 1969.

It's a good time for this consummate pianist who can bop for sure, but can also kick back in the Fats Waller songbook and stretch out into avant-garde territory, and who does it all with imagination and facility.

Yet when he tells his musical story, it begins with a kid who did not want to study piano at all.

"I wanted to play trumpet because I was enthralled with Louis Armstrong and Harry James," Cox says. "So my mother said, 'OK, I will get you a trumpet and some lessons, but first you have to take piano for three years.' Well, to a kid, three years was a lifetime. I took the piano lessons at the Detroit Conservatory of Music. And my mother was true to her word. She got me the trumpet and the lessons, and I was ecstatic. But she told me that I had to continue to take the piano because my teacher told her that I had a great affinity for it."

Realizing he would never sound like his idols Armstrong and James, Cox quit playing the trumpet during his freshman year at Cass Technical High School. But he stuck with jazz. In high school, Cox played in a jazz band that performed at dances and fraternity functions. He also hung out regularly at jazz spots such as the Bluebird Inn and the West End Hotel. Cox got his big break around 1959 when vocalist Etta Jones hired him.

He moved to New York and spent five years as musical director for Jones, whose records included the Top 10 R&B hit "Don't Go to Strangers." Cox got a rep as a quintessential vocalist accompanist, also playing behind Helen Humes and Ernestine Anderson. But he came back to Detroit in frustration.

"I had crisis of self-esteem or whatever you want to call it," he says of the Jones experience. "After playing with her for so long and not the hardcore cats, I felt that I was really behind, or at least I convinced myself that I was. So that's why I really came back to Detroit, to regroup myself."

Back home, Cox played with trombonist George Bohannon's quintet, which seemed on the verge of a deal with Mercury Records before it split up. The pianist had stints with guitarist Wes Montgomery, drummer Roy Haynes and saxophonist Rahsaan Roland Kirk before joining up with drummer Danny Spencer and bassist Ron Brooks in Brooks' trio in Ann Arbor. That's where Cox met saxophonist Leon Henderson (the troubled brother of the better-known Joe Henderson) and trumpeter Charles Moore, both of whom occasionally sat in.

"We established such a simpatico in those casual sessions that we became very anxious to play with each other," Cox says. "I'll show you how bad it was. Us thunderheads were so obsessed that during the riots in '67 we were running the curfew to get up to Ann Arbor to play. That was the birth of the Contemporary Jazz Quintet."

The quintet quickly became popular. Local DJ Jack Springer helped them get a five-year deal with Blue Note Records that led to the outstanding records Introducing Kenny Cox and the Contemporary Jazz Quintet and Multidirection.

In the original liner notes for the Multidirection session, jazz critic Nat Hentoff captured the essence of the CJQ sound: "The scope and depth of the group's essential lyricism also ought to be noted. In this album as in their first, Kenny Cox and his quintet move in a stimulatingly varied number of directions. 'Variations' is the best way to summarize their music in a single word. But within whatever changes in time and line and in color take place, there is core of lyricism — a soaring of feelings."

Cox says the relationship with the label was a nightmare.

"They would not fly us to New York to record at a decent studio. Nobody around Detroit was recording jazz at the time, and they flew their producer here. The first date was a near disaster. The studio wasn't even set up to record a jazz record. It was a jingle studio. It was so bad when we got there the piano was out of tune and they had me call my personal piano tuner to come tune the piano. On the second session Francis Wolff produced the date. So we thought that it was going to be better, but he didn't understand our concept at all. ... So that date was almost as dissatisfactory as the first one. After that we made a move to get out of the contract."

So Cox was surprised when he received an e-mail from Blue Note's Michael Cuscuna stating that the label was going to reissue the two albums in its Connoisseur reissue series after they'd been out of print for three decades. Cox says he doesn't know why the company decided to put out the albums, which are now a single disc under the title Introducing Kenny Cox and the Contemporary Jazz Quintet.

However, Cuscuna explains it in an e-mail: "I use a variety of criteria to decide what comes out and when. But requests from fans play a large part. I was friendly with Kenny and Charles Moore in the '70s and even recorded them at the Ann Arbor Blues and Jazz Festival 1973. I always liked the two Blue Note albums and intended to get them out at some point. Then about six months ago, I got an e-mail from one of Leon Henderson's children asking about these sessions (the only ones he ever made). That prompted me to pull out my albums and listen. And, man, was I shocked! They were as good as I had remembered them. They were absolutely fantastic."

After the quintet left Blue Note, they formed the Strata Corporation, opened a local record label and a performance space called Strata Concert Gallery. The label released a number of albums, including discs by saxophonist Larry Nozero and organist Lyman Woodard. But Strata closed in 1977 because of cash flow problems, and the CJQ split up.

Cox freelanced for six years after that, and supplemented his income working as a building manager at the Renaissance Center. For a couple years, he stopped playing entirely. But since quitting that job, he's been playing ever since.

He's had some notable groups over the years. In the early '80s, for instance, he founded the Guerilla Jam Band, a sextet featuring vocals that grew to 12-piece ensemble. Regina Carter, Donald Walden and Phil Lasley were some of the members of that group, which broke up in 1992.

These days he's excited about his new octet, Kenn Cox & Drum, which can sound like three different bands duking it out with Cox egging them on. Cox has big plans for this group.

"I hope to fully develop this band as a percussion-rhythm-oriented ensemble, emphasizing the rhythms of the world as synergized with traditional jazz," he says. "Two multiple-reed players are included because woodwinds have a greater presence in African, Middle Eastern and South American music than brass. The literature will be heavily my own compositions, but we will also be playing the works of others such as 'Caravan' and 'Tin Tin Deo.' There will also be a concerted effort to move this band from a regional group to one of national and international standing."

And with the Blue Notes reintroducing Cox to the jazz world beyond Detroit, the chances of pulling that off just got better.