Dulcinea Detwah's worth her salt in art and rhyme 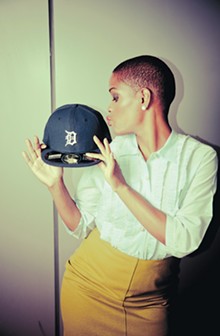 The first thing that'll endear you to Detroit-born, Brooklyn-based rapper Dulcinea Detwah is her name — a phonetic spelling of the original French pronunciation of her hometown. She might live in New York City now, but she representin'.

"Everybody who knows me, they know specifically where I'm from," she says. "Whenever somebody says that they are out of pocket, I say, 'I am from the east side of Detroit'. They are all like, 'Oh, yeah, we know, east side.'"

So if Detwah says she bleeds Detroit, and she does say that, what's not to believe, at least figuratively? In fact, the sometime photographer did her thesis for her Master of Arts degree about the arts community in Detroit. And she's really Cornelia McPherson; Dulcinea came from Don Quixote, one of her fave books.

So do her Brooklyn contemporaries get the gag in her stage name? "No, and I think that's cool," she says. "But people from Detroit get it."

See, the twentysomething Dulcinea Detwah is a different sort of rapper than most; there's a real sense of joy in her raps. She grins, for one thing. Not since Salt-n-Pepa has a female rapper looked and sounded like she was having such fun without basically flashing parts of her anatomy. That's not to say that her music is kids' stuff; she still swears like a spot-welder. But, and you'll have to hear her to know what this means, she does it with refinement. She's not abusing words and rhymes to spit crass diatribes. She is, what they call, a breath of fresh air.

So why did she bail on Detroit?

"I went to school in Ann Arbor first," Detwah says. "I went to the University of Michigan from 2000 to 2002, and I went there for dance, like Madonna. I grew up on the east side, right off of Mack and Buckingham. I then moved to New York for dance, also like Madonna. I lived in Philadelphia for two years, and now Brooklyn, which reminds me of Philly. I was looking for a place that gave me the homey feel of Detroit. Being in Detroit as long as I was, I remember knowing my neighbors and the people at the corner store. I didn't get that when I first moved out to New York because I lived in a neighborhood that was primarily Spanish-speaking. It didn't feel homey. When I moved to Philly, it gave me a good mix between homey and city. I moved to Brooklyn in 2008, again, it gives me a mix of the homey feel and the city. It's a lot more diverse too. When I left Detroit, I thought the world was black. Brooklyn is really diverse. You have all sorts of people here. Everybody is pretty much segregated, but you still can be on the train or work with a lot of different people. I don't know if I'd say cliché, but there's been a mass exodus from Manhattan to Brooklyn, because it was a cool place, affordable, but still close enough to Manhattan. Slowly but surely, it's starting to become like a Chelsea. It's the cool art place, but nobody can afford to live here anymore. A lot of Brooklyn has become like Manhattan."

So what led a dance-mad grad to began rapping? Careless abandon.

"I was in a three-bedroom apartment, living with other artists," she says. "I work as an arts administrator, so I have money to put into my emcee-ing. I decided to throw caution to the wind. It's like, this is crazy. I just need to do it."

That why Detwah can dig what she's doing; the woman works her ass off at a day gig, and raps for the love of music. Of course, she has aspirations of breaking into the mainstream, but don't hold that against her for a minute because, if she does hit it, she'll have hit it on her terms.

Detwah's giving away her "Cool Kid" EP free at Bandcamp, and you should download it because, well, the price is right, but it's also a phenomenal piece of work. Those Salt-n-Pepa references show up on the title track, and "Hot 32" is all old-school beats and flowing, melodic rhymes. Her best has the unwieldy title "This Track Makes Me Wanna Sing Like a British Rock Star," and its chorus is absolutely inescapable. Radio-ready pop elements are there, but there's a grit that, she says, comes from her hometown. "I hate it when people say Detroit is grimy, but a lot of my gritty sound is from Detroit," the rapper says. "When it's time to create, that's what has moved me the most. I miss the Detroit people. Wherever you go, if you run into a Detroit person, they are the most genuine people ever. They'll always talk about real shit that's going on. ..."

Detwah is still as much Detroit as the day she left town. She's earnest, witty, skilled and tough.

So what's next? Her full album should be out by the beginning of 2012, then she'll see "what happens about a tour. I'll be recording a video for "Cool Kid" before that. If I come to Detroit in November, it'll be the first time performing music in my hometown."

The "Cool Kid" EP is available now for free at Bandcamp.