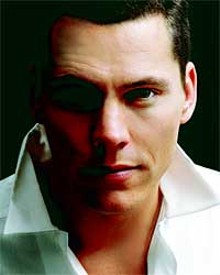 In the largely anonymous world of dance music, DJ Tiesto is a renowned brand name like Digweed, Oakenfold or Van Dyk. DJ Magazine named him the top DJ in the world the last two years, and there appears no limit to his momentum. Unlike the aforementioned, Tiesto is relatively new to electronic music, only beginning to produce in the late ’90s, when he recognized that putting out tracks was the surest way to make his mark and move his name up the marquee.

Tiesto founded his own label, Black Hole, in 1997 and released his Space Age and Magik series of vinyl remixes that established him and Dutch peers Ferry Corsten, Johan Gielen and Armin Van Buuren. Those albums helped Tiesto, aka Tijs Verwest, secure an American deal with the Nettwerk label, which released his 2000 Summerbreeze album to coincide with his first U.S. tour. The album included a remix of Delirium’s “Silence” featuring Sarah McLachlan, which Tiesto reworked into a choppy synthetic sea of swooning, swelling electronics, nestled around McLachlan’s angelic (yes, kids, that’s angelic) vocals, ringing like a siren call over the choppy churn of the music. It became one of the biggest trance cuts ever, nailing a top chart spot in the U.K., and peaking at No. 3 on the Billboard dance charts.

“I heard the track in Holland, and I asked the record company if I could release it,” says Tiesto, recounting the origin of this signature tune. “There was a dance mix out of it, and I didn’t really like it, so I wanted to improve the mix, and that’s how I came up with the idea, and then it blew up everywhere around the world.”

“Silence” made the native Dutchman an international star and sold vigorously, but, to Tiesto’s apparent disappointment, it never provoked a response from the artist.

“I’ve never met her. I made the mix for her, and she never even called,” Tiesto complains.

Of course, it did make him as an artist.

“Yeah, OK,” Tiesto admits, “but it certainly would be nice to get a call, like, ‘You did a great job.’ It’d be nice but I guess she’s too busy.”

It’s something Tiesto should be able to relate to. In the last four years he’s been one of trance’s most sought-after DJs, regularly playing Ibizia, Spain’s huge dance music festivals and just about every country under the sun, performing every night of the week, and selling out venues, even here in America, where the trance scene is translating into huge record sales.

“In the U.S., everything is very underground compared to Europe. I see it like Europe 10 years ago, without the radio or television where the music gets promoted. So it’s a big difference,” Tiesto says.

But even without radio, trance has become a major club phenomenon, a groundswell that surprises even Tiesto. “It’s still blowing my mind every week. I’m always going to new places, and every tour is getting bigger and bigger. Like this U.S. tour, on the average night they have to send away two to three hundred people. All the gigs are sold out. Yesterday in Atlanta on a Wednesday night — it’s usually dead — there were 3,500 people. And the night before in Boston also sold out — on a Tuesday night. So I’m still shocked every week.”

Tiesto is currently supporting his second artist album, Just Be. Like his prior artist release, In My Memory, the songs are full of rich feminine vocals that carry the spare lyrical elements of the compositions. However, the new album’s a lot moodier, with more slowly coursing, melodramatic tracks than you’d expect from a typically frantically throbbing trance release. It also has pop (gosh!) songwriting elements.

Not that Tiesto’s necessarily in a bad mood. He did successfully defend his No. 1 DJ title.

“It was a good moody; I don’t just like drama moods,” he says. “I am not in a bad mood; it’s more of a euphoric mood, eh? That’s what it’s like today, the opening set is euphoric, like you win something and you want to stay there forever.”

Tiesto is especially looking forward to Detroit, the birthplace of techno. (The House Sounds of Detroit comp, he says, was one of the first things he ever purchased.) Usually a very energetic DJ who takes to climbing into the audience and glad-handing well-wishers, he regrets that he won’t be able to do as much of that in Detroit.

“It depends on the location of the club. Like the club Bleu, in Detroit, I will be playing upstairs, so there’s not much room for connection with the crowd. …”

But he promises to give the people what they want, whatever that may be.

“It depends on the vibe,” he says. “I’m always influenced by other sounds, so I’m not afraid to use some techno or some progressive. I like to mix it up a little bit. But the main line is still trance. And it’s always going to be trance. I stick to my roots. I still try to evolve but in a trance kind of way. I try to push the trance out further.”