Politics and Prejudices: Photographs and memories 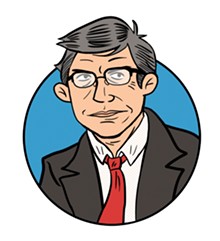 This column was written a few days ago, and I have no way of knowing who Donald Trump may have slimed yesterday.

This is a man, after all, who made fun of Hillary Clinton because she had to go to the bathroom ("disgusting"), made fun of Carly Fiorina's face on TV, perpetuated a crude stereotype about menstruation, and mocked a disabled reporter.

You might be asking yourself: Who is left to smear?

Evidently we live in a world where, for the Donald, there are never any consequences. But what about those who have made this monster's rise to a presidential nomination possible?

If the nation is saved and this creature defeated — hopefully, overwhelmingly defeated — will those who sold out pay any price? Will John McCain be humiliated for endorsing Trump, even after he outrageously attacked his patriotism?

Will Speaker of the House Paul Ryan be punished for supporting a presidential candidate who he knows very well is attempting to rip this nation apart with hatred and fear?

They certainly should be. They should be treated like Germans who supported the Nazis. They are selling out their principles and common decency for "party loyalty."

Some of them, like the gross and thuggish Chris Christie, actually think Trump might win and give them a job.

Others, like Ryan, want to be able to pick up the pieces after he loses, and present themselves as more electable while earning the loyalty and gratitude of those who backed Trump.

That, after all, is what Richard Nixon did when the party nominated Barry Goldwater in 1964. He straddled both sides, survived the landslide that followed, and was there to pick up the pieces and be elected president four years later.

But Donald Trump is not Barry Goldwater. The early candidate was a fundamentally decent, if sometimes scarily naïve man, who said scary things and deserved to be repudiated for voting the wrong way on the Civil Rights Act.

Goldwater, however, had principles. He changed and grew, and became a supporter of gay rights before he died.

Trump is an amoral and offensive slug — belligerent, proudly ignorant of foreign affairs and virtually everything else — who delights in attacking and hurting people.

Possibly the most moving moment of the Democratic National Convention came when a Muslim immigrant from Pakistan named Khizr Khan spoke eloquently of his love for this country and son, who died fighting for America in Iraq in 2004.

Trump's response was to sneer that the dead soldier's mother Ghazala, who stood at her husband's side on the platform, was probably not allowed to talk because she was a Muslim. (She was, it turned out, overcome by emotion.)

That smear provoked a ferocious response from decent people, some of whom apparently saw what Trump was for the first time. Even McCain, who previously sullied his honor and reputation by endorsing Trump for president, denounced the smear, saying his candidate did not have "unfettered license to defame those who are the best among us."

Think of it. McCain, who was tortured for years in North Vietnamese prisons, who still suffers the physical effects of his trauma, is endorsing a man who managed to get out of the Vietnam-era draft, and who earlier this year sneered at claims that McCain was a hero, saying, "I like people who weren't captured."

This is especially appalling because McCain worked with and traveled with Hillary Clinton in the U.S. Senate.

He knows she is a sane and decent human being; I know this because he has said so to a mutual friend.

And yet he's endorsing this dangerous man for president, possibly because he fears — at age 80 — that otherwise Arizona might not re-elect him to the U.S. Senate.

What kind of honor is that?

How can he ever respect himself again?

Unfortunately, Ryan is probably right. Most likely, given that Americans have the attention spans of a gnat, the only way those endorsing Trump will be punished long-term is if he manages somehow to win the election and destroy this nation's economy, start a nuclear war, or both.

Which could actually happen, given his crass admiration of Vladimir Putin and unbounded ignorance about the world.

One small example: Recently, when asked about Putin's aggressiveness toward Ukraine, Trump assured interviewer George Stephanopoulos that "he's not going into Ukraine, all right? You can mark it down."

When told that Putin had already invaded Ukraine and occupied the Crimea, Trump said, "Well, he's there in a certain way."

Then he added that this was President Barack Obama's fault, and added, "the people of Crimea, from what I've heard, would rather be with Russia than where they were."

This is the man who McCain, Ryan, and others would put in charge of our nation's nuclear codes.

This is not, let me repeat, a normal campaign. This is life and death for democracy and the planet. I never in the past found much, if anything, to admire about George W. Bush and Mitt Romney. But now I do. They are refusing to vote for Trump.

So is former President George H.W. Bush, who helped manage the end of the Cold War. Those three men, however wrongheaded in their policies, know what being president means.

The nation needs to listen to them, for its own survival.

How long is too long?

If there's one thing we've learned about government over the past two decades, it is that mandatory term limits are a disaster.

They have given us a legislature in which nobody is there long enough to gain any expertise in how government works, or form relationships that can lead to getting things done. Instead, too many of them sell their voters out to special interests.

We don't have those in Congress. Thank the Founding Fathers and how hard it is for yahoos to amend our Constitution.

But there's nothing wrong with knowing one's limitations. John Conyers, who is 87, is a national hero in many ways for what he's done for civil rights, and for his efforts to honor jazz.

But he's been semi-lucid at best for years, yet he has kept on getting elected, aided by powerful name recognition and gerrymandering that makes the fall election a mere formality.

Congressman Sander Levin, an Oakland County Democrat, has been prominent in Michigan politics since he was nearly elected governor ... in 1970 and 1974. He's been in Congress since 1982, and was briefly chair of the powerful Ways and Means Committee. Intellectually, he's sharp as ever.

This November, he will be triumphantly re-elected, and I plan to vote for him. But ... by then he will be 85.

Two years from now, he will be 87. Even if he is still at the top of his game, there are a bunch of talented younger politicians who would be worthy successors. For example, his own son Andy, who has been doing great things to push energy conservation in private sector buildings.

There's the multitalented Steve Bieda, too, a state senator from Warren who will lose his job in 2019 thanks to term limits.

Shouldn't both Conyers and Levin think about following the lead of John Dingell and Carl Levin, Sandy's younger brother, graciously retire, and let someone else have a turn?