Pay it back with interest 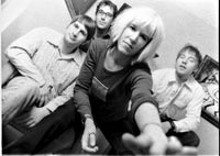 The four scruffy members of the Paybacks are shit-faced. Quarts of Labatt pump through each as they rehearse songs off their debut full-length, Knock Hard, due out April 22.

The basement rehearsal space is classic low-rent rock ’n’ roll — frayed rugs, amps stacked on milk crates, a cheap PA that hurls ear-twisting feedback between songs. The den is hued in whorehouse red and yellow, and Iggy and Janis keep close watch from their pinned-up vantages on the wall. The cellar has the unmistakable musty smell of Garageland.

Case’s voice pulls the band’s charge. It’s a voice that is equal parts rockist squall and wounded slut-goddess, offering tunes with a lyrical penchant for lovely black women and wronged strippers, luckless Vegas heifers and Hollywood has-beens. Her steely voice box is as masculine as her Chrissie Hynde stance is purely feminine; she’s slender-hipped with guitar strung low, her face hidden behind a mess of bleached locks.

Case knows that a Chrissie Hynde comparison is a compliment of the highest order too. Hynde and the Pretenders were a watershed for female songwriters, and hit the charts like a sledgehammer in the late 1970s, kicking rock ’n’ roll patriarchy in the balls with hard-nosed tales of growing up female in America.

“The only chick that was out there that I really felt changed things for me was Chrissie Hynde,” Case explains later. Her airy speaking voice belies the big-lunged vocal attack. “She had the same heroes I did. Jeff Beck, Iggy and those guys ….

“All of my vocal heroes are all men,” she continues. “By the time I got to the point where I was actually thinking about what I was singing I was more interested in the Stones and the Stooges, that kind of stuff.”

The Paybacks rehearse in the home guitarist Marco Delicato shares with his wife, Heather. The house is situated in a sedate Ferndale neighborhood of neatly trimmed hedges and polished cars.

The juxtaposition says so much about the band. A loving embrace and excruciating assessment of all things touched by — and affecting the shape of — the Paybacks brand of kick-shit-over rock ’n’ roll. It’s the sorrowful glory of unending childhood caught in the inexorable grip of adulthood. And it’s screaming to get the fuck out.

The seasoned Paybacks have known this city for years. Both drummer Mike Latulippe and bassist John Szymanski do double duty in the Hentchmen. Guitarist Marco Delicato was in Rocket 455.

“I used to check out her [Case’s] band, Ten High,” says Delicato, a guy who from certain angles looks like he could be teaching fifth grade, not leaping about wielding a Flying V. The horn-rimmed glasses send the image home. “She’d come and check out my old band, Rocket 455, when we did shows. Both bands were at the end of their days and she wanted to put something together and asked me to play with her.”

That was three years ago. Hence, Knock Loud, a hook-filled, relentless, sometimes sloppy record that is equal parts 1967, 1977 and 1979. And like a proper record, it clocks in at just over 32 minutes. What’s more, there ain’t a slow tune to be found. Knock Loud is righteously sludgly and it rips.

The record — on the indie label Get Hip — is rife with poppy Cheap Trickisms; “Thin Air” combines the staccato of “He’s a Whore” and the descending drone of “Come On Come On.” Long, leisurely Bun E. Carlos snare rolls tie together “Hot Shot.”

“We get the Cheap Trick thing a lot,” Case says. “But really we love the band madly.”

“Tie Me in a Knot” is a glammy slam of American rock ’n’ roll, complete with an early Alice Cooperish extended solo in the middle. “Vegas” even sports a tempo change at the end.

The record’s best track is a churn of heavenly proportion called “If I Fell,” a tune that skillfully marries early burning-rubber-scented Detroit rock ’n’ roll with late-1970s power pop. Another odd juxtaposition.

For Case the songs and her lyrics are obviously cathartic; her voice is the sound of release, in the most traditional rock n’ roll way.

Case knows the difference between shining and dying. Her fierce efforts to carry on, despite years of the burdens of the rock ’n’ roll myth — including spells of sleeping in closets, gnarly addictions — with vision intact are inspiring (and, yes, the word is selected with caution).

She started on a ukulele when she was 9, switched to guitar at 10 and started playing bluegrass (“I wanted to be like Doc [Waston]”). Bo Diddly played in Case’s junior-high auditorium when she was in seventh grade

“That had a huuuge impact on me ‘cause he swore the whole time he was on stage. He was drunk and swearing and I was really, really impressed,” Case says.

After graduating from Dexter High, Case moved to San Francisco to attend art school. “Dexter is a little cow town just outside of Ann Arbor. Because I wanted to go and see the world, as soon as the bell rang I went like a shot out to San Francisco. My purpose was to go to school. I got there right as the punk scene was on its last legs but it was a major, major, major big deal for me. It’s where I cut my teeth entirely.

“At the time there were still people lingering from the (punk rock) scene,” she continues. “I started to become deeply involved in the lifestyle. I was just a kid and as I got more involved, the substance abuse became a huge part of it. At some point I had to make the decision to live or die, so I left.”

In 1988 she moved to Ann Arbor and later hooked up with the band Ten High, which released a record titled Party Store.

“Ten High was essentially put together to just play garage punk and party. That’s what did, we drank excessively and played really fun, cheesy garage punk. And had a really good time. I was struggling with sobriety. So when our record came out in ’96, I kind of hit the wall.”

Case credits John Krautner, guitarist for the Go, for getting her back into music. “I came to Detroit and moved into another closet. It really took me awhile to get to the point where I could make music again. We started Mustache Ride, with John and Mark from the Go and Steve Nawara from the Wildbunch, and it was really fun. Kind of glammy rock covers. It was a blast to play in front of people again. We did Nazareth’s ‘Love Hurts.’

“When it came time to start playing again Marco was the first to volunteer, which was great. I would never know until much later how great it was.”

Talking over beers at the Lager House, Case has none of the spiteful apathy of a jaded and bitter rock ’n’ roller who’s lived on floors, been strung out. The days of tequila/beer-soaked gigs and dive-bar revelry are not over for her. “I’m not ready to quit,” she says, “at least not yet.” (She now makes her living as a writer for a local daily.)

Unlike much of the mock musical intellectualism inherent in the D-town garage landscape, the Paybacks are not maintaining a certain wary distance from rock ’n’ roll. They are, in fact, embracing it head on, without irony. They play rock ’n’ roll like they’ve nothing left to lose. The Paybacks are willfully contrived but are sparked on wit, tension and a sense of absurdity plainly unique in these parts.

As it says on the band’s Web site, the Paybacks are “really tired of stuff that doesn’t rock.”

You can perceive that in a contrived way, Case explains. “You have to remember that that’s what we grew up on. Anything that looks contrived are really learned behaviors. We learned everything we know from the Alice Cooper band and Rolling Stones and all that kind of stuff.

“Everyone in this band wants to make music that’s honest and decent and good that we can care about. Everyone is tired of contrived bullshit. We really aren’t interested in being hip or cool, just wanna make fun music. We’re actually enjoying Van Halen records again, genuinely. And Judas Priest!”

She pauses, snickers, and then says, “If we grew up with Limp Bizkit we’d probably have our asses hanging out of our pants and baseball caps on.”

Case sees the band’s place in Detroit thusly: “We have little in common with the current crop of garagists coming out of Detroit. We are an ugly little rock band.”