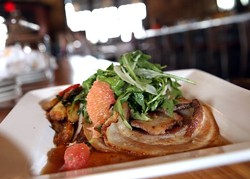 O lucky Corktown, to be blessed with so many eating establishments where bold flavor rules the day: Slows, Astro and Mercury Burger rub shoulders on the same block, with other gems nearby. Now affordable Ottava Via joins the throng, and it’s already a star. The official opening will be approximately Aug. 24, with a much expanded menu sure to be as good as the pizzas, entrées and wine available early on.

Isn’t it good business practice to choose a name folks can pronounce easily (what is it with Trinosophes?). You don’t want anyone to feel intimidated about discussing your place. But I haven’t met a person yet who got Ottava Via right on the first or even second try, most of them attempting some version of “Octavia.” It’s Oat-TAH-va VEE-a. If you were Italian you’d hit both the T’s individually, and it’s Italian for Eighth Street, which is the corner where the old Dime Bank has been transformed. The high ceilings are still there. There’s a patio, and a stylish clock that will put you in mind of a European train station, perhaps a nod to the neighbor across the way.

The menu is gloriously Italian, as will be the bocce court in back when it’s finished. Familiar items like pasta, pizza and panini are carried to their heights and joined by inspired charcuterie, side dishes and the featured entrée, porchetta (por-KET-ta).

Let’s start there. I don’t usually mix morality and food-calorie-health issues. You won’t catch me calling chocolate “decadent.” But when the porchetta was placed in front of me, the sentence “this is the most sinful thing I’ve ever eaten” involuntarily escaped my soon-to-be-smacking lips. That’s because it’s pork belly wrapped around a pork loin, with its wide bands of way-better-than-bacon fat artfully coiled, and topped with a tangle of dressed arugula for tartness and pink grapefruit to add an acid note. It’s heavenly.

The plan is to offer porchetta as a $10 sandwich too, with red-onion jam, but I’d ask them to hold the provolone.

Equally excellent in the meat department is thin hanger steak, pounded into tenderness, with a tomato-red-onion chimichurri. Neither of us could say enough about either of these dishes.

Another night, we went with starters and pizzas route. Roasted vegetables appear at their finest: buttery, crisp asparagus, beets served with candied walnuts and ricotta, and woodsy caponata agrodolce — eggplant and peppers and other good things. Calamari, melted pecorino with pears and sweet Italian sausage are other options.

Or go with a charcuterie plate, here called “cured meats,” or cheeses. We liked Taleggio, which is “washed rind” and “smear ripened” (consult your cheese families guide). Fresh mozzarella is made on the premises, 80 to 100 pounds a week. and is the only kind used on plate or pizza.

Sous-chef Matteo Burns explained the process: curds in small pieces are submerged in salted water heated to 132 degrees. Burns and others form it into balls, stretch it to pull the whey out, and then submerge it in salted ice water. “It doesn’t totally burn your hands,” Burns said. The result is not rubbery, which is undesirable, but firmer than many mozzarellas. You get a lot whether you order a cheese tasting or Caprese.

As to the paper-thin meats: we tried finocchiona, which turned out to be as full of luscious fat globules as, say, soppressata, which is also available, and bresola, the only non-pig choice, a soft-leathery air-dried beef. Other choices are capicola, prosciutto and Genoa salami. They’re served with big, almost-as-thin slices of buttered crostini, candied walnuts, chunky pear marmalade and pickled carrots. You definitely feel taken care of.

Pizzas: Of the three we tried, our party of one vegetarian and three not agreed that the garlicky vegetarian was the best: asparagus, mushrooms, provolone and a lot more. Crusts baked in the 1,000-degree gas oven are thin, of course. The also-excellent Rustica features pancetta and a sunny-side-up egg that is pierced by your server and dribbled over the abundance of fresh arugula. The marinar was only for the purest purist, though — a smear of tomato sauce, fresh oregano and one anchovy per slice.

White pizzas, four-cheeses, funghi (mushrooms), those starring meat — there will be a pizza for everyone. And chef Ariel Millan will be offering lardo and duck prosciutto on the build-your-owns!

Pastas will include truffle butter and carbonara. I want those, and I want the PLT panini, with pancetta. Desserts will include gelato, olive oil cake and, already, a fabulous Nutella panini with raspberry and mascarpone — I promise, this is far better than it sounds.

Note: You can ride the bus from Nemo’s, next door, to any of the downtown games.