Will it even matter? 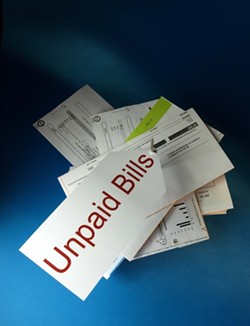 Reading through the 128-page report Detroit Emergency Manager Kevyn Orr provided to creditors last week, we here at the Hits had a question others in the media didn’t seem to think was all that important to ask. (Not that we are wagging a scolding finger.) It’s entirely understandable that the city’s two dailies, would focus on the report’s specifics.

There’s a lot to ponder, including the bombshell that the city, last Friday, missed a $39.7 million payment on debt issued to fund pensions. As Bloomberg News reported, with that missed payment “Detroit becomes the most populous U.S. city to default since Cleveland in 1978.”

According to the most recent tally, Detroit has about $17 billion in long-term debt, and nowhere near enough revenues to cover its obligations. But not all creditors are in the same leaky boat. There is, for example, about $6 billion that the Water & Sewerage Department owes bondholders; that money will be repaid with the fees paid for by those using the system.

Others, however, including those holding general obligation bonds (or their insurers) are being offered less than 10 cents on the dollar. Pension and health benefits for retirees will also be on the chopping block.

“We have to sit down with the boards of both pension funds next week and hammer out an agreement about the true funded status of these funds. Once we do that, then we can make more specific recommendations about changes to pension benefits or fund structures,” Orr spokesman Bill Nowling told the publication Pensions & Investments.

Certainly, it is heartening to read Orr’s stated commitments to improve police, fire and ambulance services for the city’s residents.

Who could argue with that?

Then there are other issues that are certain to provoke intense reaction, such as the leasing of Belle Isle to the state, and creating a new authority to take control of the Department of Water & Sewerage.

But, as we said, all of this and much more have already been reported. At the Hits, though, we try to adhere to an approach favored by baseball Hall of Famer “Wee” Willie Keeler, who, when asked once about his success at the plate, responded by saying,  “I keep my eyes clear and I hit ‘em where they ain’t.”

OK, admittedly, we often do a lousy job of keeping our eyes from being terribly bloodshot, but we do strive to place a focus where others don’t.

Which brings us to our question of the week, which is: Does Kevyn Orr legally have the authority to do anything?

The jury, as they say, is still out on that one. But it is a question that deserves to remain front and center in the discussion of all things Orr.

We realize that the state Legislature passed, and Gov. Rick Snyder signed into law, a bill allowing the appointment of emergency managers to take control of financially troubled cities and school districts.

But just because legislation is enacted doesn’t necessarily mean it is legal. Ultimately, that’s up to the courts to decide. And when it comes to Michigan’s emergency manager law, and the history behind it, things are anything but settled.

In fact, that point is alluded to in the report to creditors that Orr released last week. Two lawsuits are particularly noteworthy.

One is Phillips v. Snyder, which is pending in the U.S. District Court for the Eastern District of Michigan.

“This governor is injecting emergency managers between the voters and the people they elected and that is in direct opposition to a government by the people and for the people,” John Philo, legal director for the Sugar Law Center, said last month when Phillps v Snyder was filed. “We can all argue about how and what Detroit needs.  But, at the end of the day, the solutions we choose must be constitutional and they must come from the elected representatives of the people who will have to live those solutions. Replacing legally elected leaders without an election or a conviction is fundamentally, anti-democratic, anti-voter and unconstitutional.” A hearing on that case is scheduled for Aug. 21.

Then there’s Detroit NAACP v. Snyder, which is also pending in the federal court in Detroit. In that case, the plaintiffs assert that the Michigan Legislature violated a section of the federal Voting Rights Act when it passed the current EM law.

From Snyder on down, supporters of the law say it’s legal. If the courts decide otherwise, though, then nothing done by any emergency manager in the state has any legal authority.

Our point is that, amid all the debate about what Orr is trying to do, we shouldn’t lose sight of the underlying issue, which is this:

Does Orr really have the legal authority to do anything at all?

It seems that everything being written about Orr and his plans should be accompanied by a large asterisk that warns: Anything an emergency manager attempts to do could be rendered void.