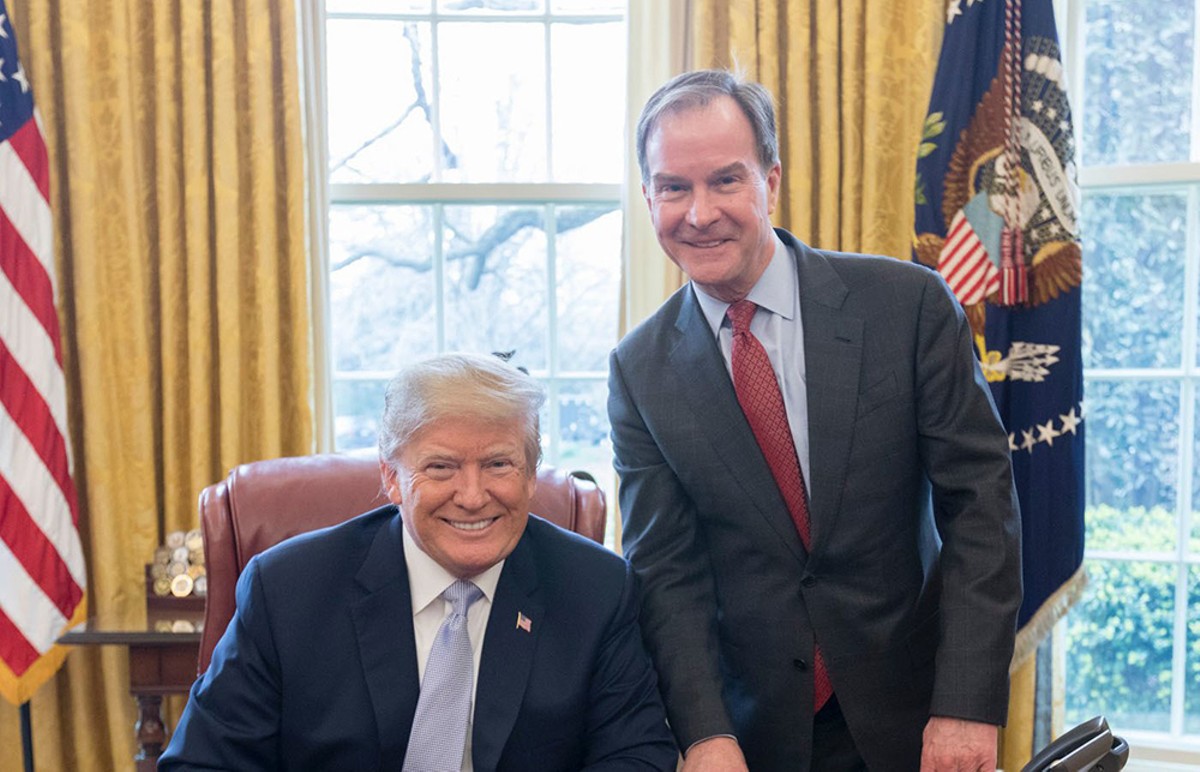 Bill Schuette in the Oval Office with president Trump.

In Michigan, we've suffered 24 years of bad governors on both sides of the aisle with John Engler, Jennifer Granholm, and Rick Snyder. Snyder has been the worst of them. He boldly went against the will of the people and democratic principles in establishing the emergency manager law, which led to callously taking over majority minority municipalities across the state, which led to the Flint water disaster, among other things.

Sadly, it's just one more display of the old white male Republican strategy to maintain power as it slips through their fingers — and to make more money. Democrats like power and money too, but they're better at following the rules and have more inclusive motivations. Together the two parties hold a near-monopoly on American politics, but that may be breaking apart. Trump is really no Republican. He just attached himself to the party for the purpose of getting elected, but his only real allegiance appears to be to money and Putin.

Whoever the winners are from Tuesday's primary, it's mostly going to be all about Trumpism — whether you are for or against it. In Michigan's primary, Republican attorney general Bill Schuette had Trump's endorsement and topped every Republican poll I saw. On the Democrat side, former state house minority leader Gretchen Whitmer led the polls leading up to the primary election. In her TV spot, the only person she called out by name was Trump.

Right now candidates are making the calculations on choosing their running mates to maximize votes. They'll say that it's all about Michigan issues, but this is really a referendum on Trumpism. Republicans will embrace him, and Democrats will resist. Those positions are clearly staked out, and things aren't looking bad for the anti-Trump team.

There have been polls that show Whitmer beating Schuette in a general election. And while that is worth about as much as a fart in the wind right now, it gives heart and hope to the Democrats.

There are other signs of hope.

The proposal to end gerrymandering in Michigan supported by Voters Not Politicians calls for an Independent Citizens Redistricting Commission made up of voters, rather than the current system of allowing whatever party is in charge every 10 years to set the congressional district boundaries. The result of the current system has been to create an impassable Republican majority in the state legislature because districts are configured so that Republicans win a majority of the seats, even if Democrats garner more of the popular vote.

Schuette led the opposition to putting an anti-gerrymandering proposal on the ballot. However, the state Supreme Court ruled that it should go on the ballot — and so it shall. Check off one loss for Schuette there. If the proposal passes, that changes Michigan politics for the foreseeable future. There haven't been any public polls circulated on this issue, so there's no way of seeing how the public is leaning. However, stopping gerrymandering is an issue and a trend that has helped Democrats elsewhere.

Schuette has been on the wrong side of this issue forever, and marijuana activists know this. As attorney general, he tried every trick imaginable to impede implementation of the Michigan Medical Marijuana Act, and he is no pal of recreational legalization. While he says he will heed the will of the people, his interpretation of the will of the people around medical marijuana was pitiful.

If either of those issues drives voters to the polls in November, it would not bode well for Republicans. While neither issue is partisan, Republicans in general have not supported them, and voters who support them will tend not to vote Republican.

Unfortunately, the object of cleaning up the gerrymandered congressional districts won't have a larger impact yet. The huge 63-47 Republican majority in the state House is insurmountable even if there is a blue wave election this fall. However, if the Voters Not Politicians proposal passes it means that future elections will be more equitable when districts are reset.

Straight-ticket voting is not on the ballot, but it affects how people vote. Last week, a federal judge upheld a lawsuit against a law banning straight-ticket voting that was dreamed up by Michigan's Republican-led legislature. Straight-ticket voting is when voters shade in an oval on their ballot indicating a vote for all of the candidates of a single party rather than going through and voting for each of them individually. The judge ruled that not allowing the option to voters is a violation of the Voting Rights Act. Arguments in the trial claimed that eliminating the option in high population areas would cause delays and long lines on election day.

The whole idea seemed another attempt to suppress the African-American vote. Republicans have given up on trying to win elections with their bad ideas, and have moved on to trying to keep the opposition from voting — or, as gerrymandering has done, making the votes that are cast count for less.

If you're reading this on Wednesday, today is the day after the primaries. It's a day of seeing how the dust settles and where the bodies lie. It's a day of making assessments and putting together a team and a message for the next three months of battle. It's a day of healing wounds and relationships, to remind ourselves of who the real opposition is.

In 2016, Michigan was one of the states where group differences were exploited by a Russian campaign to help deliver the state to Trump. This year, please don't listen to the dividers.

This year is our first chance to head to the ballot box and begin to fix what happened in 2016. That starts today.