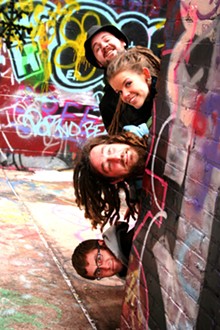 Sharky and the Habit is not your average Motor City rock 'n' roll band. Far from it. In fact, this four-piece is more like some sort of vagrant, boho Monkees. Sorta like if the patients in One Flew Over the Cuckoo's Nest formed a band.

See, the three gents and one woman who equal Sharky and the Habit all live together in a band house which, on the surface, perhaps isn't that unusual. Except maybe for this: They swear they have a pet unicorn. Also, on most nights they all sit down for story time.

So, yeah, the temptation to write them off as navel-gazing oddballs may be a bit overwhelming.

But it's not like that. An hour in their presence is enough to confirm that they're really like this — sincere, no acting for anyone's benefit other than their own. You get the impression that perhaps the four missed out on a big piece of childhood in some way, and are now making up for it — together. Like Michael Jackson, but without the touchy allegations.

And in the SATH gang's own rather charming way, they're doing this whole band thing on their own terms. "I'm having more fun right now than I've ever had in my life," guitarist James North says. There's no doubt that he's telling the truth.

The band formed a while ago when North and vocalist Paul Clos, who'd been playing together since childhood, were joined by drummer Phil Draham and bassist (and Paul's wife) Liz Clos.

North describes the band in relatively simple terms. "We stick to the rock 'n' roll, because it's well-seasoned and it's most of what we do," the amiable six-stringer says. "We all have our own thing too. I like the Californian Sublime thing. Phil is metal. Paul and Liz are in touch with bands like the Grateful Dead, Frank Zappa and Ween. We encourage each other to bring forward our own things. But there are some elements of the blues, and some elements of party rock 'n' roll that border on chaos."

And, yes, there is chaos. Let's go back to that unicorn, which happens to be named Sparkles.

"The unicorn is what binds us together," Liz says. "We went to a festival with Anthony Anonymous from the Jehovah's Witness Protection Program, and one morning I heard Sparkles trotting by. This was the Grateful Fest in Ohio. She was scared and she ran away. There were too many electronics around. But we want Sparkles to come home. We're not mad. You should help us find her."

Yeah, that's not going to happen. They have lots of help anyway, from a support network of other bands. When they have the guys in the Jehovah's Witness Protection Program and Err, their "Ghost Family," helping them locate a fookin' unicorn, who'd argue?

"Anthony Anonymous is Ghost Dad and we're his Ghost Children," Liz says, "along with the two guys in Err and some of our friends who are groupie types."

"We have a crazy approach to the whole social networking thing, which is how we get the word out there," North says, a shit-eating grin etched into his face. "We treat this Ghost Family thing and each other very realistically. We have to do it like this because it's how we live. We associate with music, spin it in our own direction and spit it right out. Whatever that is, we've been lucky enough to have people say some nice things about our album, which we recorded at Dark City Studios with Paul Ridley producing. A lot of good things have come out of having a sweet album that we're proud of."

They really should be proud of Lowe (named with an 'e' on the end to distinguish it from David Bowie's Low). For one thing, it's self-released, and, for a debut album, it's tremendous — eclectic and intelligent, surging with infectious energy and hooky melodies. "The fun thing about making that album is that we got to do everything in whatever way we wanted," Paul says. "We were treated like kings at Dark City Studios and I've never had that experience before."

As good as Lowe is, however, it doesn't entirely capture the essence of Sharky and the Habit live. More an experience than a mere gig, the band goes all-out to grab and retain audience attention, whether it's a packed room or just other band members and girlfriends.

As mentioned, the band members live together in the same house, and there's a definite sense of family. You'd guess that if they weren't in a band they'd be doing kids' TV or something; believe it or not, there's absolutely nothing creepy about them. It's Pee-Wee's Playhouse cute.

"We often sleep in the same room after a show and Phil will tell us stories," North says. "We literally get to have as much fun as we want. Our band house in Waterford is more of a tree fort than an actual home. One of our roommates just moved to Nashville, so there's more room now because he was a giant, Giant Nate. He was grumpy for a while, until we trained him."

One might imagine that this sort of living arrangement wouldn't work so well for a married couple, but Liz claims the opposite's true. "We're a married couple but we're also friends," she explains. "We don't have separate friends. We're all friends. We're a family. We are husband and wife, but the person who hooked us up on our first date is James. Oh, and then Paul grabbed my butt. It all worked out from there."