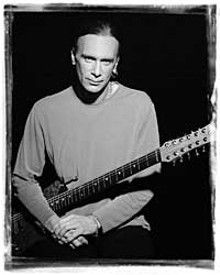 West Indian Girl has won over indie hearts everywhere. And it's no wonder: After years of traveling the country as solo performers, troubadors Robert James and Francis Ten finally crossed paths in Detroit, where together they created a '60 psychedelia-meets-jam band sound that neither annoys nor waxes on into self-indulgence. Recently signed to Astralwerks Records, West Indian Girl's Gomez-caliber art rock is ideal for the happy-hearted. Majestic Theatre, 4140 Woodward Ave., Detroit; 313-833-9700. Opening for Bump.

The desire to crack a bass player joke is strong, but we'll resist the childish temptation and simply let you lovers of the low-ender know that three of the finest are sharing one bill. It's the Bx3 tour, and big dogs Stuart Hamm, Billy Sheehan and Jeff Berlin will take the stage for a thundering evening of rhythm and rock 'n' roll. It's all bass, baby. Prepare to have your sternum assaulted. At the Magic Bag, 22920 Woodward Ave., Ferndale; 248-544-3030.

Many people refer to them as "roving ambassadors" because their ultimate goal — aside from their natural desire to entertain — is to foster a greater understanding of their home, Africa. Under the direction choreographer Italo Zambo, Les Ballets Africains presents an awe-inspiring blend of traditional dance, music, storytelling, acrobatics, comedy and drama. 8 p.m., Music Hall, 350 Madison Ave., Detroit; 313-963-7622. Tickets are $20.

The only thing as belly-achingly sweet as that mountain of Easter candy you've got stashed in your desk drawer is Irving Berlin's 1948 musical Easter Parade. Starring American darling Judy Garland (before she hit the sauce and pills), Fred Astaire and Peter Lawford, this quirky love story is a vehicle for mucho song-and-dance numbers and a great way to get into the holiday spirit. 8 p.m. at the Redford Theatre, 17360 Lahser Rd., Detroit; 313-537-2560.

Back when he cut his first records in the 1980s, Henry Butler seemed squarely in the McCoy Tyner modernist tradition. But over the years, his career has tilted back toward his hometown of New Orleans. He's built a following as an heir to the legacy of such Crescent City keyboard ticklers as Professor Longhair and James Booker, and most recently he's been digging into the blues and R&B. Not that the music is any less inspiring. Shows at 8 and 10 p.m. at the Firefly, 207 S. Ashley St., Ann Arbor; 734-665-9090.

If Che Guevara had been a woman, who knows what would have become of the revolution? In celebration the revolutionary spirit, the Bagley Housing Center in southwest Detroit presents an all-female art installation, Soldaderas: Women and Revolution. This mixed-media event opens on Monday, April 17, but the artists' reception is (appropriately) on Friday, May 5 (Cinco de Mayo), marking Mexico's victory over imperialistic France. Runs until May 27 at 2715 Bagley, Detroit; 313-964-5942.

Book Beat in Oak Park welcomes children's author Blue Balliett for a meet-and-greet. Balliet's first book, Chasing Vermeer, tickled parents and kids alike with its rich mixture of art, puzzles, mysteries and humor — in fact, The New York Times called it the "Da Vinci Code for children." Her new book, The Wright 3, is a sequel to Vermeer. 7-8:30 p.m. at 26010 Greenfield Rd., Oak Park; 248-968-1190.

It's spring break, which means working moms and dads need to figure out what to do with little ones. One suggestion: The Bugs & Blossoms Art Workshop in Northville, where kids ages 6 to 12 will participate in activities including painting, drawing and sculpture. 10:30 a.m.-4 p.m. at Awakening the Artist Inside, 111 N. Center St., Northville. Call 248-347-0807 for details.

Artist Willie Cole doesn't need ornate craftsmanship or obtuse art-speak to make his point. By using simple ideas and strongly symbolic pieces of found art, Cole's installation Real Players: Game Installations delves deeply into the meaning of life. His work, "The Elegba Factor," for example, is a maze of revolving doors that all contain words and phrases Cole compiled during an airplane ride. "It's a metaphor for life and its constant challenges," he says. "The Elegba Principle," on the other hand, "is essentially a game that playfully confronts us with choices and ultimately clobbers us with an awareness of the futility of any hope that our paths will become either clear or controllable." Ends May 12 at the Elaine L. Jacob Gallery at 480 W. Hancock, Detroit; 313-993-7813.

Speaking of Arts, Night And Day