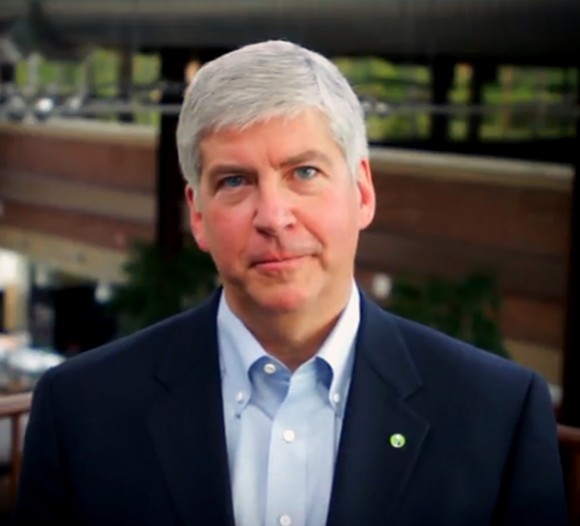 Gov. Rick Snyder never ordered a state agency to withhold information about lead testing in Flint schools, but instead quickly announced the results of water tests in 13 school buildings at a press conference in the city on Oct. 8.

The Governor’s Office unequivocally denies allegations published online by MLive on Wednesday that the Snyder ordered the Department of Environmental Quality to withhold results of testing in the schools.

Flint schools were under order not to drink the water since Sept. 25, 2015. On Friday, Oct. 2, the day after learning about elevated lead levels in in the city, Snyder responded aggressively with a an action plan that included testing the water in the schools.

New emails, obtained by the Flint Journal, suggest that Gov. Rick Snyder ordered the Michigan Department of Environmental Quality to keep mum about Flint lead test results as they figured out a way to best present the information to the public.

According to MLive, for at least six days MDEQ withheld important lead test results from Genesee County Health Officials — and the public. Emails obtained through the Freedom of Information Act, indicate that MDEQ later apologized to a county health official for the delay, saying the department was told by the governor not to share the results until a press conference.

The press conference in question is an October 8, 2015 gathering where Gov. Snyder announced plans for Flint to reconnect to Detroit's water system and stop drawing water from the Flint River. It was more or less the conference where the governor conceded that yes, there were in fact very real problems with the corrosive Flint River as a water source.

The conference — which came a week after Dr. Mona Hanna Attisha presented research showing elevated lead levels in Flint youth —  is also where it was shared that three buildings within the Flint School District had tested above the federal limits for lead in the drinking water. In fact, at the conference it was revealed that one school, Freeman Elementary, tested six times above the federal limit.

"They should have alerted the schools and they didn't," James Henry, Genesee County's environmental health supervisor, who had been kept in the dark until after the press conference, told MLive Wednesday.

News that Gov. Snyder requested that this information not be shared with health officials until after the press conference came from a FOIAed email sent by Henry to a colleague. MLive reports that about a week after the news conference, MDEQ officials met with Henry and then-drinking water chief Liane Shekter Smith; two days later Henry emailed county Health Officer Mark Valacak to recap what was discussed. In this obtained email, MLive says Henry explained to Valacak that MDEQ claimed the governor had ordered them to delay the release.

The obfuscation of information was not limited to the original school test results, reports MLive.

Freeman elementary was supposed to have follow up tests the last week of October. According to FOIAed documents Henry requested the results on Nov. 3, asking MDEQ to treat his ask as a FOIA request (subject to a maximum 15-day time limit). MDEQ's laboratory director, George Krisztian, however, rejected the request saying the Oct. 24 samples  provided an "incomplete picture of the plumbing system" and Oct. 31 results wouldn't be ready till the next day.

An email Henry wrote to his boss three days later indicates that when Henry followed up with MDEQ, he was told that the department was going to wait until Dec. 2 — which was technically the FOIA deadline — to respond.

"MDEQ reminds me of a stubborn 2yr old child," Henry wrote in an email the Flint Journal obtained. "Instead of doing what is right, they'll willfully take another spanking just to be defiant."

The results were eventually revealed on Nov. 9th — so before the FOIA deadline — however, the frustrating struggle to get the information sheds light on the often-obscured bureaucracy surrounding 'who knew what' in Flint.

If Henry's name sounds familiar it's because he was a key player in emails released last week showing that one of Gov. Snyder's top aides was aware of an uptick in Legionnaires Disease — and its possible tie to the Flint River — nearly a year before the public was informed.

Henry was the county health official who made the connection in an email that was eventually forwarded to Gov. Snyder's aide Harvey Hollins.

"The increase of the illnesses closely corresponds with the timeframe of the switch to the Flint River water. The majority of the cases reside or have an association with the city," Henry wrote in a March 10, 2015 to Flint officials and MDEQ officials. He later noted in the same email, "This situation has been explicitly explained to MDEQ and many of the city’s officials. I want to make sure in writing that there are no misunderstandings regarding this significant and urgent public health issue.”