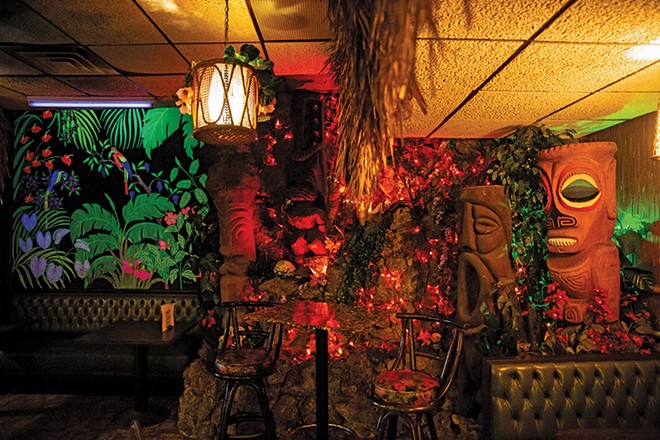 Especially on a cold, gray day of a typical Michigan winter, it’s easy to understand why Detroit would have once had an impressive tiki bar culture. But if you weren’t around for its heyday, it’s just as easy to forget just how special Detroit’s tiki scene actually was.

Its crown jewels are long gone, like The Tropics at the former Hotel Wolverine. First opened in 1941, it had a green neon palm tree outside and a hydraulic lift inside that would carry a live band from one floor to another. (The Hotel Wolverine was eventually demolished by Olympia Development to make way for Comerica Park.)

Perhaps the most famous was Chin Tiki, the brainchild of auto engineer-turned-restaurateur Marvin Chin. Detroit’s longest-running tiki bar from 1966 to 1980, it was known for its indoor bamboo bridge and for being briefly revived to make an appearance in Eminem’s 2002 movie 8 Mile. (It was also destroyed by Olympia, this time for Little Caesars Arena.)

And then there was the mighty Mauna Loa on West Grand Boulevard, a lavish $2.25 million fantasyland with an outdoor man-made lagoon, imported palm trees, waterfalls, and even an indoor pool where a girl would dive for pearls. The Mauna Loa had the misfortune of opening amid the civil unrest of 1967, and closed in 1971.

The last spot to open in Detroit’s tiki heyday was a Trader Vic’s outpost in the former Statler Hotel, opened from 1969 through 1975.

The stories behind these tiki spots and more are told in author Renee Tadey’s new book, Detroit Tiki: A History of Polynesian Palaces & Tropical Cocktails, released Jan. 31 from The History Press.

A fan of Detroit’s Mid-Century Modern era, Tadey says she was approached by The History Press to do a book due to her work on her blog DetroitDvotion.

“Being a person who loves all things Detroit, I would always look for tiki mugs and any kind of memorabilia,” Tadey tells Metro Times. To research her book, she scoured the archives at the Detroit Public Library as well as newspapers.com. She also put up flyers in senior citizen activity centers and local libraries looking for older people with memories of the bygone tiki bars.

She soon found that Detroit had a thriving scene of tiki collectors, some of whom even transformed their own basements and living rooms into their own tiki bars. Many acquired items from Detroit’s old bars, like matchbooks, menus, mugs, and other memorabilia, and allowed Tadey to have them photographed for her book.

One of the collectors Tadey found in her research was Dave Chow, a local illustrator. “They’re a tight-knit group,” Tadey says. “So with Dave, he was sort of the bridge for me, the outsider, to meet up with the other people.”

Chow had a bit of his own history with Detroit’s tiki heyday: his father worked as a cook at Moy’s in Livonia, which served tiki-inspired drinks (the daughter of Mauna Loa architect George Nakashima also worked as a hostess there), while his uncle worked as a cook at Port O’ Three in Bloomfield Hills, also owned by Chin. (Full disclosure, Chow was a professor of mine in college.)

Chow has since become an appreciator of all things tiki, and has traveled to many tiki bars in other states.

“The Mauna Loa was one of the most elaborate places in the country,” he tells Metro Times. “When I travel across the country, I hop from tiki bar to tiki bar just to take a look and see how people have done things, so it in a way kind of validates that Detroit had a thriving tiki community there for a while.”

Michigan’s cold climate only made the scene more special, he says.

“It really makes a difference here, in a Rust Belt city like Detroit,” he says. “If you go down to Florida, and you go to the Mai-Kai, which is one of the grandest, oldest places as far as tiki goes — I mean, it’s like, you step in there, you step out, the transition isn’t as drastic as it was here, on a cold, miserable day like this.”

He adds, “It was good escapism. It feels like the last time in American culture where it was like, ‘Hey, let’s ditch the kids and let’s go see scantily clad women and get drunk,’ and it was actually socially acceptable.”

Regarding changing times, tiki culture, with its historically inaccurate mashup of Polynesian cultures, seems to have emerged unscathed from the recent trend toward sensitivity to cultural appropriation. Chow, an Asian-American, thinks it could be because at its core, tiki culture is all in good fun.

“It’s kind of weird for me because my family worked there, and I don’t think there was ever any disrespect,” he says. “When my dad and my uncle worked there, they were ‘Polynesian’ places, but they cooked Chinese food. My dad loved working in those places. It never really dawned on them. For them, it was just a job. And for me, as a child watching this growing up, it was like, ‘Oh, that’s what dad does.’ I don’t think there's any malice intended.”

He adds, “I know my uncle kind of liked the theater of it all, too.”

Metro Times reporting by the late culture writer Sarah Klein is cited in the book, particularly when Chin, buoyed by the renewed interest thanks to 8 Mile, unsuccessfully attempted to bring back Chin Tiki. But tiki culture in Detroit lives on, enjoying a bit of a revival in newer bars like Mutiny Bar and Lost River. And Chin’s Chop Suey in Livonia, operated by Chin’s son Marlin and grandson Steven Lim, is still open to this day, with thatch-covered booths and a collection of sculptures salvaged from Chin Tiki.

For Chow, Detroit’s tiki heyday is a reminder of simpler times.

“[Going out] was more of a celebration back then,” he says. “It was an occasion. And I think that’s one thing that we’re missing, and I think part of the reason Renee kind of wrote the book, was to kind of celebrate those days.”

He adds, “I think part of what tiki culture kind of celebrates, you know, is when things were a little bit more slow, and people could actually enjoy things, at least a little bit.”

Tadey will talk about her book as part of the Happy Hour Detroit livestream at 7 p.m. on Sunday, Jan. 30 at the City Tour Detroit Facebook page. Polynesian-inspired attire is encouraged.