Mulenga and Detroit 1967: The board game 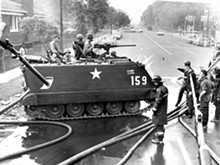 It was somewhere before 6 a.m. The doorbell was ringing and my dog was barking. I stumbled to the door wondering if it was the police coming to get me. When I peeped through the window I saw it was Mulenga Harangua clutching what looked like a long box wrapped inside a big, black garbage bag. When I opened the door Mulenga seemed to burst into the house like a ball of energy.

"Mulenga, what the hell are you doing coming here at this hour?" I demanded.

"I've finally got it," he practically shouted.

"I don't care what you got," I said. "What the hell are you doing here?" My language was a little salty but I wasn't fully awake and was hoping to be back in bed before that happened.

"Hey, you know me," Mulenga said. "I do the unexpected. That's what keeps me free and on the streets."

I shook my head. He wasn't on the streets; he was in my house at an ungodly hour, but I decided not to point that out. I led him toward the back of the house so my wife could sleep as it dawned on me that I was not getting back in bed anytime soon.

Mulenga waved his package at me. "I've got it."

"The key to what happened in 1967," he explained, pulling a box out of the garbage bag. "All this talk about the rebellion has set me to thinking. All the media is making money talking about it. I figured I should make some money too. So I figured out a board game."

I looked at the box. The cover read, "Detroit Uprising (Motor City Burning)."

I had to shake my head again. It was going to be one of those days. I totally gave in. "Want some coffee?"

When I got back from the kitchen with a couple of mugs, he had the game spread out on a table. Little pieces of plastic were scattered around the board. There were various squares, circles, and other shapes that defied the geometric imagination. Mulenga gestured toward it like Vanna White indicating a wonderful prize on "Wheel of Fortune." He was beaming like a proud papa. "Do you like it?"

"I don't even know what it is," I said. "What are those?" I pointed at some little multicolored doodads.

"Those are the playing pieces," Mulenga said as he picked some of them up. "See, this is a shopping cart. Folks were using them to carry their 'liberated' items home. This is a tank. There were plenty of them around when the feds stepped in. Here's a little Molotov cocktail, the weapon of choice for many during the sixties."

I was impressed with the accurate details of the pieces. "How did you make these?"

"I went to this maker space where they have a 3-D printer," he said. "I learned how to program the computer and the printer makes them."

"So you're using the latest technology here," I said. "How come you didn't create a video game?"

"There weren't any video games in 1967," Mulenga replied. "This is historically authentic."

I gazed over the board and noted the names associated with various areas. Right in the middle of the board, two lines intersected with a label denoting "12th and Clairmount — Ground Zero." Mulenga tossed a couple of pieces onto that spot.

"This is where you start from," he said. Then he pulled a spinner from the box with a gun as the pointer. "You spin this and then go where the gun tells you to go."

Some of the choices on the spinner were "Liberation Zone," "Smoke Inhalation," "Pig Roast," "Hippie Enclave," and "Staying Alive." There were little stacks of cards with monikers like "Escape From Belle Isle," "Irrational Guard," and "Triple R."

"It's the intellectual part that prompts discussion of whether it was a 'riot,' a 'rebellion,' or a 'resistance.'"

"I think it was all that," said Mulenga. "For instance, the initial event when police raided the after-hours party. It was a coming home party for a couple of returned Vietnam Vets. They could have just shut it down but they decided to arrest everybody in the place. First of all, I think the brothers were suffering from a little displacement. I mean, probably back in Nam there was no 2 a.m. closing time. Plus it's like an 11-hour time difference. They didn't know what damn time it was. Probably had some jet lag.

"And I have to guess there were others with military experience in the crowd. The police found some folks who were ready and knew how to fight back. So the whole thing started as a response to police who were going overboard. That sounds like rebellion, or at least resistance. I mean the black people of Detroit had been under siege for decades. The almost all-white police force was running roughshod over black folks. Even those who had money weren't allowed to live in better neighborhoods."

"Well," Mulenga demurred. "There were elements of a riot and elements of rebellion; it wasn't all one thing. There were many aspects. And none of that accounts for the fact that a lot of white folks took the opportunity to burn down their own properties so they could collect the insurance. Then they just abandoned the city and took all their money with them."

Mulenga pointed to a stack of cards I hadn't noticed with "White Flight" on them. "That's why I put those in."

"So why did you name these cards 'Irrational Guard'?" I asked. "I think it's called the National Guard."

"That's because the irrational guard showed up here with a shoot first, ask questions later attitude," Mulenga said. "They weren't trained to handle this kind of thing. All they really knew was going camping on the weekend, marching around, and taking orders. They were a bunch of scared shitless weekend warriors."

"I guess you put this 'Escape From Belle Isle' thing here because after the jails were full they incarcerated people there."

"Damn straight it is," Mulenga said. "See the little boats I made for escapees."

"Hmm, this is kind of interesting," I said. "So what's the goal of this game?"

"Well it's kind of got dual goals," Mulenga said. "It depends on how you handle the Triple R issue. If it's a riot you need to make it home with as much stuff in your grocery basket as possible. If it's a rebellion you head to the land of political empowerment."

"Then you have to go to school to learn your reading, 'riting, and rithmetic," said Mulenga. "You have to be well-educated to resist well."