Mike Bloomberg is terrible at this 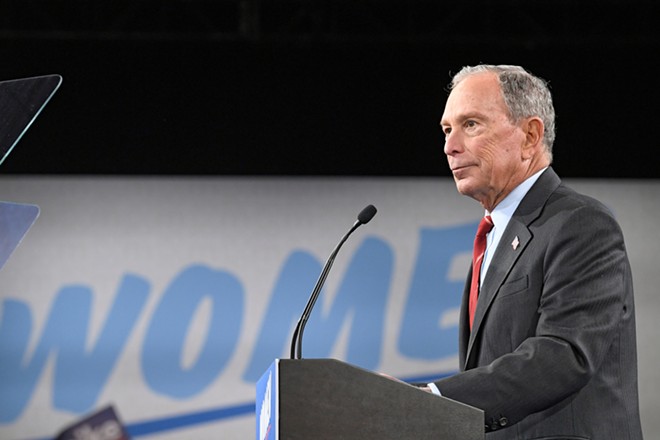 Ron Adar, Shutterstock
OK, Bloomer.
On Wednesday, 2020 Democratic presidential candidate Mike Bloomberg will make his debate stage debut in Las Vegas, having garnered the 10% or more in four major polls necessary to qualify. The billionaire and former Republican's absence from the debate stage so far hasn't seemed to hurt him, however.

A recent poll finds him trailing frontrunner Sen. Bernie Sanders, 19 percent to Sanders' 31 percent — but that's largely due to Bloomberg's unprecedented TV ad spending spree. According to The Intercept, Bloomberg "has upended the Democratic presidential primary with an infusion of cash that has smashed through historical records in a matter of weeks," having already spent $363 million on cable, broadcast, and radio advertisements.

It's amazing what a barrage of TV ads can do, because Bloomberg is waging an utterly shit campaign otherwise.

He ultimately declined an interview with the New York Times' editorial board for its big splashy primary endorsement rollout after the paper refused to postpone its timeline to accommodate Bloomberg, who explained "that he did not yet have positions on enough issues," a Times spokesperson said. (Despite his refusal to participate, Bloomberg still inexplicably earned one vote from the NYT's endorsement board.)

Then, earlier this month, Bloomberg paid edgy Millennial- and Gen Z-oriented social media accounts like @fuckjerry, @GrapeJuiceBoys, and @Tank.Sinatra to run ironic sponsored posts in support of the wannabe president. The ads are confusing for a number of reasons, primarily because it's hard to tell if they're real. (They are.) They show purported screenshots of Bloomberg sliding into the DMs of the influential accounts, promising to spend a lot of money for them to make him look hip. The result is that Bloomberg looks like the out-of-touch billionaire he actually is. Why would someone spend money on this?

Even worse is a press release the Bloomberg campaign sent out earlier this week denouncing Sanders' alleged toxic "Bernie Bro" supporters — an imagined cohort of largely white and male supporters that stems from Sanders' 2016 campaign against Hillary Clinton.

"In just the past week, Bernie Sanders’ National Press Secretary Briahna Joy Gray, Senior Advisor David Sirota, and National Campaign Co-Chair Nina Turner have referred to Mike as a 'racist' and an 'oligarch,' implied Donald Trump is better than a fellow [Democratic] candidate for president, and called Bloomberg supporters 'enablers,'" the release reads.

Hilariously, two of the three "Bernie Bros" mentioned in the release are Black women. And the thing is, these aren't vicious "attacks" — these are objectively true criticisms of Bloomberg's record. Bloomberg is an oligarch — he's the ninth wealthiest person in the world, worth an estimated $62 billion and change. Bloomberg's reign as mayor of New York City is under scrutiny due to his administration's stop-and-frisk policies that targeted Black and Latino youth at far higher rates than white people, and federal courts later declared the practice to be racially discriminatory. Bloomberg is also under fire for his administration's spying on Muslim New Yorkers.

In Michigan, Bloomberg has been following the playbook of multimillionaire Democratic gubernatorial candidate Shri Thanedar, who won the Motor City after dumping more than $10 million into local ads (but ultimately finished last in the primary). Bloomberg has reportedly spent $7.5 million on ads in Michigan so far, and has met with nearly 80 Black Detroit pastors. He has also taken out ads in Arabic and English in the Dearborn-based Arab American News, and sent a campaign representative to meet with metro Detroit Arab American leaders. But the outreach has been met with skepticism and criticism by some in the local Arab American and Muslim communities who aren't buying it.

"Under then-Mayor Bloomberg’s Muslim spying program, reading an Arab American newspaper in public or even just speaking Arabic would have been justification enough to be surveilled and profiled by the NYPD," Scott Simpson, the public advocacy director with Muslim Advocates, said in a statement. "Bloomberg is campaigning in the same language he once flagged as a warning sign. The NYPD’s Muslim spying program profiled people based on their ethnic origin, the types of restaurants they went to, the language they spoke or simply whether they attended a mosque."

It remains to be seen if Bloomberg the candidate can live up to his multimillion dollar ad campaign. Wednesday's debate airs at 9 p.m. on MSNBC.