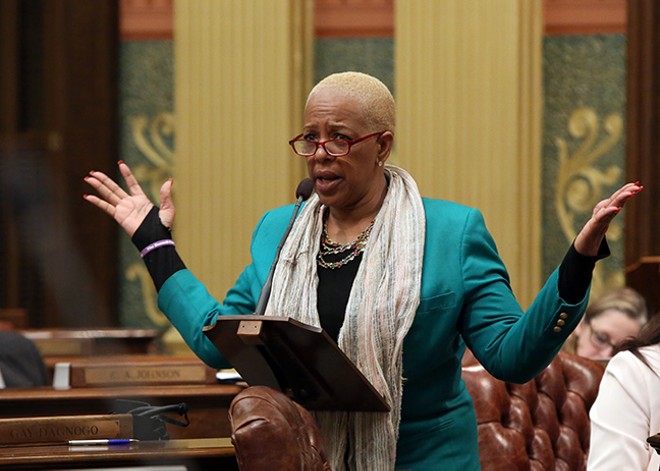 https://housedems.com/
Cynthia A. Johnson.
It's time for Michigan's Republican leaders to take a long look in the mirror.

According to Chatfield and Wentworth, Johnson was punished because she made "threats" against Republicans in the video.

"Threats to either Democrats or Republicans are unacceptable and un-American. They’re even more unbecoming of an elected official. Rep. Johnson has been removed from her committee assignments, and we are looking into further disciplinary action as the proper authorities conduct their own investigations," Chatfield and Wentworth said in a joint statement.

"So, this is just a warning to you Trumpers. Be careful. Walk lightly. We ain’t playing with you. Enough of the shenanigans. Enough is enough," Johnson said in the video.

"And for those of you who are soldiers, you know how to do it. Do it right. Be in order. Make them pay. I love y’all."

What Chatfield and Wentworth seem to ignore is that Johnson was responding to threats she says she has received since questioning Rudy Giuliani, the former Mayor of New York and now attorney for President Donald Trump's quixotic campaign to overturn the results of the election, during a widely mocked hearing to attempt to overturn Michigan's election last week. (Seriously, it was even lampooned on Saturday Night Live.)

Johnson, who is Black, posted voicemails she received from triggered Trumpers on her Facebook, including some that called for her to be lynched.

It's not clear that Johnson is calling for violence in the video. In the same video, she also encourages her supporters to be civil.

So far, Chatfield has come down harder on Johnson than he has on his own party.

For example, as armed protesters were gathering in Lansing to protest Gov. Gretchen Whitmer's pandemic response, Trump tweeted "LIBERATE MICHIGAN!" Later, some of the armed men who attended the protests were revealed to be part of an alleged FBI-thwarted plot to assassinate Whitmer.

Mere hours after the plot was revealed, Chatfield appeared at another anti-Whitmer rally in Lansing alongside Senate Majority Leader Mike Shirkey, R-Clarklake.

“This is no time to be weak in our commitment to freedom,” Shirkey said to the crowd, according to Michigan Advance. “We need to be strong … and not be afraid of those who are taking our freedoms away from us.”

Chatfield never reprimanded Trump for his call to "LIBERATE MICHIGAN." Instead, Chatfield and Shirkey agreed to meet with Trump last month in Washington, D.C. to discuss Michigan election law.

After the meeting, Chatfield was spotted drinking at the Trump hotel.