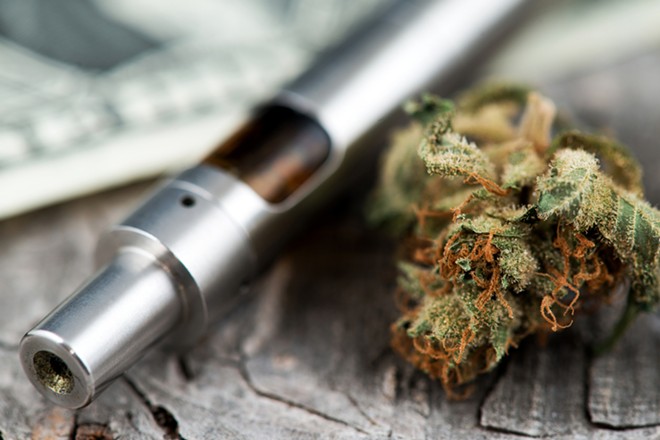 The number of Michigan residents sickened with a severe lung illness primarily tied to black-market cannabis vaping has doubled in the past 10 days, reaching 30 confirmed or probable cases.

The advisory, posted on the department’s website, marks the first time the state has emphasized the role that THC vapes have played in the outbreak, which began to take shape in July. Previously, state and federal health officials lumped nicotine and THC vaping together, despite mounting evidence that a vast majority of the cases were linked to tainted, black-market cannabis cartridges.

Failing to distinguish between the two has caused confusion and adds to the risk that people will continue vaping tainted THC cartridges, health experts have warned.

Gov. Gretchen Whitmer was the first of four governors to ban flavored nicotine vaping products amid the health crisis, but her administration has been silent on the primary cause of the spate of lung illnesses.

“Banning [nicotine vaping] products is going to cause many ex-smokers to return to smoking and is also going to create a new black market for flavored e-liquids,” Michael Siegel, a professor of community health services at Boston University, tells Metro Times. “Worst of all, it is going to lead many youth to switch from vaping flavored e-liquids to vaping marijuana, making the outbreak much worse than it already is.”

A week ago, the Centers for Disease Control and Prevention (CDC) finally acknowledged that a vast majority of the lung illnesses were linked to black-market cannabis products — not nicotine.

Nationwide, the number of lung illnesses reached 1,080, with at least 19 deaths, the CDC said Thursday. Health officials cautioned the illnesses are showing no signs of slowing down.

While health officials have not identified any one substance linking the cases together, researchers are increasingly focusing on toxic additives, such as vitamin E acetate, in black market THC cartridges. Though Michigan's state-licensed marijuana provisioning centers test for a variety substances, they do not yet test for vitamin E acetate.

On Wednesday, the New England Journal of Medicine reported that “toxic chemical fumes” may be to blame for the respiratory illnesses. By analyzing biopsies in 17 of the cases, researchers discovered damaged lung tissue that resembled chemical burns.

Most of those cases involved THC.

Some researchers said the findings point to contaminants in THC vape cartridges.

“This provides further evidence that it is extremely unlikely, if not impossible, that flavored nicotine e-liquids of the type that have been used by millions of people around the world for up to a decade are causing these injuries,” Linda Bauld, professor of Public Health at the University of Edinburgh, said in a statement. “Instead, contaminants look like they are to blame. Most of the evidence points to adulterants in cannabis vaping, but other products may be involved.”

The findings have raised questions about the wisdom of states banning nicotine vaping since it’s generally considered a healthier alternative to cigarettes, which kill one of every two long-term users.

“For adults switching from cigarettes to vaping, that’s a good thing,” Dr. K. Michael Cummings, a tobacco expert and professor of psychiatry and behavioral sciences for the College of Medicine at the University of South Carolina, tells Metro Times. “There is very good data that vaping nicotine is a lot safer than smoking cigarettes.”

Cummings adds, “The governor should have banned combustible cigarettes.”

But that’s unlikely to happen because Michigan’s $2-a-pack tax on cigarettes raises $920 million a year for the cash-starved budget. That’s compared to $1.2 billion about a decade ago, when e-cigarettes began to hit the mass market.

Lawsuits filed in state and federal court are aimed at stopping Michigan’s ban, which went into effect Tuesday. Next week, a Michigan Court of Claims judge will consider pausing the ban while an Upper Peninsula vape shop argues that Whitmer overstepped her authority by prohibiting flavored nicotine liquid without legislative approval.

On Thursday, a judge temporarily blocked New York from enforcing its ban on flavored e-cigarettes to consider the merits of a lawsuit similar to the one filed in Michigan.