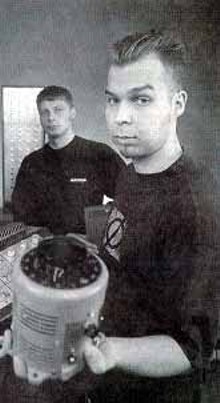 Its skipping CD rhythms and test-tone-like frequencies may try the patience of those yet to be bitten by the electronica bug, but Pan Sonic resides in the hearts and ears of adventurous electronic music listeners. The pulse of underground dance culture percolates through its third album, A, even as Pan Sonic draws upon the tweakings of dub, the dystopic musical malaise of industrial groups such as Throbbing Gristle and the titanic tones of the sound installation crowd.

"We’d like it to be physical, but interesting to listen to as well," explains Mika Vainio, who, along with Ilpo Vaisanen, makes up this futuristic Finnish duo. Formerly known as Panasonic, the group lost an "A" but gained an album title at the legal hands of the international electronics giant.

Vainio and Vaisanen’s music resonates with the coldness of the country that spawned them, though the two now reside in the sunnier clime of Barcelona. More a white(noise)-out than a chill-out, Pan Sonic’s tickings, blips, static and drones contain mesmerizing cycles that can soothe just as well as disturb. Shunning conventional equipment, Pan Sonic relies on homemade and rewired vintage analog electronics to create these isolationist sounds.

Vainio reveals, "There’s a friend of ours in Finland who has built us a couple of analog synthesizers." This friend, Jari Lehtinen, made two composite sound generators for the duo: the Typewriter (the one in the typewriter carrying case) and the Fish Box (the one in the tackle box). "They are the base of the Pan Sonic sound," says Vainio of the devices that create Pan Sonic’s combination of sonic sine waves and hypnotic beats.

With such unique, new instruments, Vainio and Vaisanen can’t always be in complete control — but that’s not necessarily a bad thing. "The interesting thing, what we like, is that there are some sort of coincidences and errors happening. And this is something that we sometimes turn into a new idea," Vainio explains.

Along with a handful of other brilliant electronic minimalists out there — Thomas Brinkmann, Bernhard Gunter, Oval, Pita, Pole — Pan Sonic pushes the borders of musical experimentation, interfering with the distinctions between cool academic explorations and the warmer energy of dance floor fallout. The reduction of sonic structure to bare, repetitive elements of tone and pulse places Pan Sonic at the apex of techno exercises in economy.

Already in the duo’s five-year career, they’ve collaborated with a disparate selection of musicians and other artists, including Björk and Alan Vega. They’ve provided music for fashion shows and performed works by John Cage alongside those of New Music sensualist Gavin Bryars. Still, there are other avenues of collaboration Pan Sonic would like to explore. Working with legendary rock wildman Hasil Adkins (!) ranks high on their list. And, as Vainio confessed, "I think it would be interesting to make a movie soundtrack. Me and Ilpo, we really like the movies of Andrei Tarkovsky."