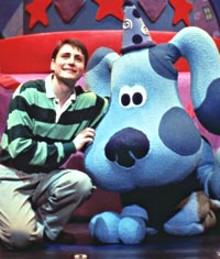 22 WED • FUN FOR ALL Blues Clues Live! — A stage spin-off of the educational "Blue’s Clues" television series, Blue’s Birthday Party at the Fox Theatre will be one of the most lovingly crafted and thoughtful theater events for preschoolers coming through Detroit all year. The lovable pup Blue and her sleuthy pal Steve romp through an interactive birthday party with all the characters and songs that have been popularized by their award-winning Nickelodeon television series. The show runs Wednesday, May 22-Sunday, May 26 at the Fox Theatre (2211 Woodward, Detroit; call 313-983-6611 for more information.)

23 THU • MUSIC Terrence Parker — Given the overwhelming politico jargon and dizzying he-said she-said jaw-wagging that has just about sucked the life out of the world’s biggest free electronic music festival, it’s easy to forget that the thing that makes this coming weekend truly monumental is the DJs who have spread the Detroit gospel to the world. But if you lose your gossip guide to the good guys and bad guys, let legendary house innovator Terrence Parker be a reminder of what this cultural phenomenon is all about. As both a producer and a performer Parker has been instrumental in bringing Detroit to the world. He will kick off Bleu’s week of world-class DJs on Thursday and will be followed by Psycho Bitch and resident DJ Crobar Chicago (Friday), progressive house, techno and hip hop with DJ Jon Pak (Saturday) and a Euro Night with DJ Crazy George (Sunday). At 1540 Woodward, Bleu is within easy (st)rolling distance of Hart Plaza; call 313-222-1900 for details.

24 FRI • MUSIC Brendan Benson — Someday power pop is going to return. People are going to wake from their insouciant slumber and storm the radio stations, demanding songs with melody and chorus. The masses will crowd the streets and heap all their Staind records into a flaming pile and from every window Brendan Benson will blare — like some aural bat-signal signaling the long-overdue melodic regime. Backed by The Well Fed boys (members of the Atomic Numbers and the Mood Elevator), his Friday night at the Magic Stick (4140 Woodward, Detroit; call 313-833-9700) may just start the revolution.

25 SAT • ART "…the kitchen sink" opening — Art a la carte? The detroit contemporary (5141 Rosa Parks, Detroit; call 313-898-4ART) continues to overwhelm by closing its season with the appropriately titled "...the kitchen sink," an end-of-season blowout of stunning breadth. A true bonanza of creativity, "...the kitchen sink" will showcase dozens of artists who specialize in time-based media, installation, music, performance art and 2-D and 3-D works of every imaginable shape and size. As if that weren’t enough, the gallery will be open 24 hours a day starting with the May 25 opening and ending the evening of June 1. Every night there will be music performances and every day there will be activities in the sculpture garden. Check out www.detroitcontemporary.com for complete information on performances and programs. And don’t forget the No-Doz.

27 MON • MUSIC Burning Brides — With filthy guitar riffs and the throaty soul-holler of Dimitri Coats, the Burning Brides could easily be fit into the current "A"-list of Detroit favs. The band’s blaring, turn-it-up-to-11 rock comes out with guns a-blazing to crush and destroy all who may fall in its path. When the Brides are turned loose on the Shelter (431 E. Congress, Detroit; call 313-961-MELT) with the Lanternjack it will be nothing short of an ejaculatory explosion of hard-hitting rock attitude and punk spirit. Probably some spit too.

28 TUES • MUSIC Triangle, I Am The World Trade Center, Busy Signals — A-one. A-two. A-one, two, bleep, bloop. Starting with Triangle’s new New Wave 313.Jac (624 Brush, Detroit; call 313-962-7067) will host an evening of knob-twiddling and electro-pop. The technologically savvy boy/girl, two-sided Triangle can bleep through harmony-heavy dance music with the best of them. The Busy Signals ’70s bubble gum loops, gentle New Wave keyboards and suburban understanding of hip hop has made them message-board favorites and the duo of I am the World Trade Center (insert witty justification of their pre-Sept. 11 name here) is the perfect headliner with (you guessed it) slightly electronic up-tempo pop jams. Don’t expect tri-partite bill of Gary Numan devotees to do an "unplugged" session anytime soon. Spacey locals Halon support.