Drawing comparisons to the War on Drugs 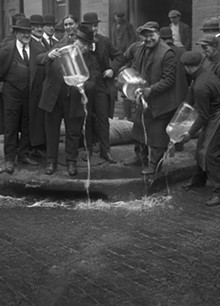 The three-part miniseries from Ken Burns, Prohibition, which concludes on Public Broadcasting on Tuesday and repeats locally Sunday, is a penetrating and meaningful look at a colorful and controversial piece of U.S. history. One thing that impressed me was the way Burns presented the complexities of an issue that from a distance seems fairly simple: to drink or not to drink?

The era now seems almost cartoonish, with a sense of Keystone Kops chasing lawbreaking but lovable bootleggers who supplied a public that went to speakeasies and ordered "tea" with a wink and a nod. Even bloodthirsty gangsters are seen as ersatz Robin Hoods who gave the people what they wanted. In a time when, in most places, any adult can walk into a store or bar and order just about any kind of alcohol concoction, the Prohibition era seems laughable. But as Burns shows, it was really an era when passions ran high and in many cases lives were on the line.

It's not difficult to see how alcohol prohibition and drug prohibition are similar, though Burns didn't pursue that angle. "Our film is a history of the 18th Amendment," Burns told me in a telephone interview last week. "We were aware of marijuana use from the project we did about jazz. Marijuana was making one of its appearances in a subcultural world. We didn't have as widespread use as now. Alcohol abuse was a huge social problem in the United States."

But Burns does not live with his head in a hole. He went on: "But you can't help but see parallels with today: single-issue political campaigns, demonization of immigrants and African-Americans, the decay in social discourse, smear campaigns, warrantless government wiretaps, perpetual questions about the role of government. One of the connections that any intelligent viewer will make is, what about drugs today? In the criminalization of marijuana there are many, many parallels."

But alcohol prohibition lasted only 14 years at the federal level. Marijuana prohibition, which came in definitively at the federal level with the Marihuana Tax Act in 1937, seems to have lasted much longer. That's a matter of perspective. Prohibition starts off detailing issues around alcohol abuse and a preacher's published sermons railing against demon rum in the early 1800s. When you couple that with the fact that there are still dry counties in the United States where alcohol sales are illegal, it stretches the fight over alcohol use in this country much further.

One lesson learned, if alcohol prohibition is a model for marijuana prohibition, is the tremendous and complex political action involved on both sides of the issue. I'm talking presidential politics. In the 1928 contest between Republican Herbert Hoover and Democrat Al Smith, Smith was vilified for being a "wet" (anti-Prohibition) and a Roman Catholic. Mabel Walker Willebrandt, a lawyer who had been assistant attorney general in charge of prohibition enforcement under President Warren Harding, was one of the leading and most effective speakers against Smith. When Hoover won and didn't appoint Willebrandt attorney general, she left the Justice Department for private law practice. One of her first clients was Fruit Growers Ltd., which was marketing Vineglow, a grape concentrate that could be made into wine.

And to further highlight the hypocrisy of anti-alcohol politics, Willebrandt herself was known to enjoy the occasional drink before joining the prohibitionists. Harding was known to drink and stock the White House with bootleg liquor.

"Harding was for Prohibition, he said, but had booze delivered to the White House," says Burns.

One of the most enduring bad consequences of Prohibition was the rise of organized crime. Detroit's Purple Gang, Al Capone in Chicago and numerous New York mobsters fought over turf for more than a decade while supplying a public that increasingly flouted the law.

That prompts questions about violence in drug trafficking. There certainly would not be powerful drug cartels if marijuana, cocaine and heroin were legal; street gangs would not be fighting each other in turf wars; and there would be few users mugging folks for their next fix under a health care model of drug policy. Not that marijuana users are out there mugging folks; that element is among coke and smack users.

Law enforcement officials, including Michigan Attorney General Bill Schuette, claim that marijuana dispensaries attract crime, but a study released last week by RAND Corporation found that there was more crime near Los Angeles marijuana dispensary locations after they were shut down than when they were open. Researchers said the crime detected near closed dispensaries relative to open dispensaries could be due to a loss of foot traffic, more street level drug activity, fewer nearby police patrols or a loss of security provided by dispensaries. Police have disputed those findings, but RAND is known for the rigor of its studies.

While the issue is hot now, with both sides pushing to have their point of view backed by law, Burns sees the whole issue through a historical lens.

"Human beings have been drinking alcohol as long as there have been human beings," he says. "I think we ought to proceed with some caution that those who pushed Prohibition did not have. There are going to be unintended consequences. Legalization or decriminalization would decrease the attendant violence in our drug black market. So much is involved in cocaine and heroin it's going to be difficult and it's going to be tricky."

Supporters of ending drug prohibition often point to the failure of alcohol prohibition as preface to the failure of drug prohibition. Certainly the 40-year War on Drugs has failed if the goal was to eradicate their use. And illegal drug use is more widespread now than it was when President Richard Nixon declared the war in 1972. Indeed, Presidents Clinton and Obama have admitted to marijuana use in their youths, and it's a fair conclusion that George H. Bush used cocaine. Also, the hypocrisy of government on the issue was highlighted in the 1980s, when the CIA was involved with cocaine traffickers fighting the communist regime in Nicaragua.

Many marijuana-legalization activists attempt to coalesce around the issue politically by trying to focus on that to the exclusion of all other issues. For instance, activists applaud former New Mexico Governor Gary Johnson, a Republican, for calling for legalization of marijuana, but his views on most other issues are solidly conservative. Most marijuana activists don't want to talk about the rest of his platform. Maybe a closer look at Prohibition will open their eyes. The historian Burns warns us about "single-issue political campaigns."

"The past resonates with the issues in the present," he says. "It is not my intention to say this is what you do with these contemporary issues, but the past is the key to solving the problems of the present."

While some today see it simply — to toke or not to toke? — we're in the middle of a complex human drama that will not easily be resolved. As Prohibition points out, all of our constitutional amendments except the 18th are about expanding human freedoms. That one curtailed them. Maybe the words of Mark Twain, which open the Prohibition series, are most appropriate here: "Nothing so much needs reforming as other people's habits."

I guess some things do transcend time.

The final installment of Prohibition airs on WTVS-TV (Channel 56) Tuesday at  8
p.m.All three parts air back-to-back from 1 to 7 p.m. Sunday, Oct. 9, on the station.