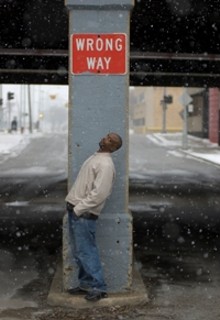 It's 1 a.m. on a frigid Friday night, and the cigarette smoke in Alvin's is doing nasty things with the smell of fried chicken and waffles. Soon, the crowd of 50 or so shifts its energy to stage-front as Baatin enters. It almost feels like 2001, except, the three cats appearing with Baatin aren't T3, Elzhi or J-Dilla. They're three hype-men who stay side-by-side with the ex-Slum Villager as he runs through a 15-minute set of Slum Village classics.

Also gone are the trademark turban, glasses and goatee. Tonight, Baatin looks like an everyman emcee: jeans, bald head topped with a hoodie. All appearance judgments aside, Baatin is still magnetic. As the crowd lip-synchs each verse, he gets into it like a fighter warmed up after the first couple of rounds. Soon the hoodie's off and he's all over the stage. Sweat and rhymes spit simultaneously. This becomes a return — Baatin's return. He caps the night with some new material and, as a finale, he kneels down. The last move is a show of appreciation to the crowd. And it's as if he's grateful. Grateful to be alive.

The next day, at a photo studio near Alvin's, the newly sober Baatin is still hyper from the show, eager to pose, eager to talk.

"I started rapping in '89 at Pershing High. I was going by Eazy-T and Scandalous-T back then; it was me, Al Nuke and a few others." Baatin pauses, looks upward, then out of nowhere spits, "My name is Eazy-T and I'm the lord of the beats/And I got more rhymes than a dog got fleas!"

He bursts out laughing. "I've been doing a lot of that lately, and it feels good."

He's talking about the laughter.

There's nothing crazy about Baatin's story, at least the early part. Dude was born Titus Glover (after the Roman Emperor Titus Flavius Vespasianus) in 1974, on Detroit's east side. In the early '90s, he befriended now-fallen rapper Proof, and would accompany him to hip-hop nights at Stanley's Café and 1515 Broadway. In 1991, Baatin's hip-hop group, Ssenepod (that's dopeness spelled backward), changed its name to Slum Village, which, at the time, was made up of Jay Dee, Baatin and T3. Titus first christened himself Scandalous-T and then Baatin.

"When I got spiritual, I wanted a different name," he says. "[Baatin] is Islamic for 'hidden.'"

The change was more than in name only; it was a temporary destination for an emcee who'd been trying to find his place in the world for many years. He was an emcee looking for an option outside of suicide.

Baatin stands, walks around, scratches his head and says, "Ever since I was 8 years old, I wondered what my ultimate purpose was. Being on the brink of suicide brought out a new style in me, I became a conscious emcee. That was my calling."

The album's success meant steady sales, international tours and worldwide respect for Slum. Of course, there's the downside. Life on tour meant bad diets, drinking and other distractions from Baatin's ongoing spiritual pursuit. "I was still in a deep spiritual quest to find myself," he says, sitting down and shrugging, "but I was also living that rapper's lifestyle."

While in Paris on a 2003 tour with Fife Dawg, Bahamadia and Mystic, Baatin's lifestyle caught up with him.

The rapper sits up straight, pauses to make sure his thoughts are clear. "My mental issues had been going on for a while, but in Paris, I was mentally ill and my skin was starting to break out."

Baatin left the tour early and came home. Almost immediately he began to feel better and figured he just needed some rest. But what was to be a short sabbatical quickly turned into a parting of ways.

"I asked the label for my personal manager and attorney," he says. "I think they took that as me cutting myself off from them."

While his relationship with Barak/Capitol became rocky, Baatin claims his fellow Slum mates had his back.

"I commend T3 and Elzhi for hanging in there with me. They knew I was sick, and they were the ones who really pushed me to go home," Baatin says.

But later in 2003, Baatin was set to perform with Slum at Detroit's State Theatre when he began strolling around the venue and screaming obscenities.

He was talking to himself.

Baatin shakes his head, "I was talking crazy and shit, and people were laughing at me! The police came and got me, I'm hearing Slum do "Tainted," and I'm trying to tell them that I'm supposed to be on stage."

Baatin spent three days in jail. When he got out, he found himself evicted. The record company, he says, had been paying his rent.

"Basically the label was saying you do you and they cut me off."

Putting the label troubles and the State Theatre nightmare behind him wasn't so easy. Soon Baatin fell into a heavy depression and his mental problems began to reveal themselves with regularity. His Slum Village days were over.

"I started chasing cars and shit down Six Mile. My mother called the police, they took me to [Detroit] Receiving Hospital and strapped me down."

Baatin was diagnosed with schizophrenia, bipolar disorder and depression.

He moved in with his mother, began exercising, eating better and taking his prescribed meds. Things were looking up. But by 2005, when his head seemed to be getting clearer and his life better, Baatin found another way to bring the walls down.

"I started smoking crack," Baatin says, flatly. He found fleeting inspiration in the jolting high of crack; he wrote rhymes in a style he'd never heard or seen before. "I figured I could get paid again, I figured I could hit the crack while I was in the studio."

Baatin lived the life of a crackhead for a little more than a year. His passion and rhymes? Gone. His car? Sold. Soon he was homeless — in the dead of a Detroit winter.

Though the emcee was still trying to make some music, he blew one golden opportunity. A promoter in Poland gave him five grand to provide two singles, "so that I could get my European buzz going on ... I got caught up doing other shit."

Cut to 2007. Baatin is now three months clean and looking forward to the release his new album, Titus Chapter 10 Verse 13, which will drop soon on a label he's still negotiating with. He calls the new record a combination of a few full-length songs and short, one-minute, one-verse charges. Although he's had his squabbles with the label, he's cool with the other members of Slum. And he refuses to blame anyone for anything.

"We wouldn't have gotten as far as we did without Barak and Capitol, we made money and had a good run," he says.

He nods his head, as if there's a beat playing somewhere in his mind. "The sound in Detroit has a halo over it. The Motown sound and the riots left us with this ghost spirit. This is Gotham City right here. I just wanna make music that will stand the test of time."