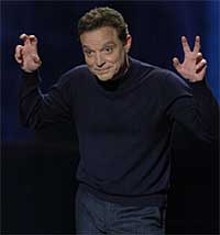 Behold Richard Jeni: the world’s most famous unknown comedian. Maybe you’ve heard his name before but you can’t place his face. He’s not flashy, lewd or loud. And he’s highly unlikely to disappear and turn up in a South African rehab center.

Where you’ll find Jeni is on the stage. That’s where he’s been night after night, town after town, decade after decade, doing what he does best: killing. He’s the perfect image of a stand-up comedian. But he’s not ready to be bronzed and mounted in front of the National Comedy Hall of Fame, coated with pigeon turds for eternity just yet. The man still has some work to do.

These days, Jeni is wearing out America’s pavement in support of his third HBO comedy special, A Big Steaming Pile of Me, which debuted this past winter. The cable TV special is vintage stand-up: a stream of articulate observations and petty gripes, all dovetailing beautifully as the laughs build and build. In an antic 90 minutes, Jeni recounts hate mail from someone who refers to him as a “punk faggot,” imagines a shootout with a crazed Martha Stewart, describes marriage as a choice between “being lonely and being irritated,” and explains how only Americans can turn a beautiful French pastry into a “crossainwich.”

It all seems effortless because it’s the essence of good stand-up; one man speaking his mind. He simply does the material: he doesn’t rap, perform haikus or dirty poems, smash gourds or “Git ‘er done.”

“I don’t want to do that, in fact, I’d rather be less famous and do what I want to do. Somebody like Carrot Top has to be a certain thing,” Jeni says.

What’s even more amazing is the fact that Jeni has survived for more than 20 years on his own merits, when so many others require a gimmick to get big. He’s never had to rely on some sort of hook or phony persona. “That’s a different job,” Jeni says. “Having to get into character and talk about stuff you don’t care about because you’re in character? That’s more like work.”

This lack of a signature bit is like a “get out of jail free” card for the seasoned comedian. “It keeps it fresh,” Jeni says. “This last HBO special was kind of a departure for me, and probably something I wouldn’t have been able to do if I had established the ‘he’s the guy who can’t get along with women’ or ‘he’s the redneck guy’ thing. A Big Steaming Pile of Me was more political and had a lot more social commentary. It was more theatrical.”

And more than anything, it’s unusually high standards that have kept Jeni from pursuing more film roles or pushing for a massive sitcom deal like his filthy rich contemporaries Jerry Seinfeld and Ray Romano. True, he took a shot at the small screen with an early ’90s UPN sitcom called Platypus Man, but the show’s failure only crystallized his faith in stand-up. “I don’t think you can serve all these different masters and nourish all these talents and still be happy with the work,” Jeni says. For a guy like Jeni, comedy — not celebrity — is the brass ring. “I don’t really need money that I won’t be able to spend anyway. I just want to keep doing comedy. I don’t think people give stand up enough credit as a craft.