Joe Biden says marijuana may be a 'gateway drug,' despite evidence to the contrary 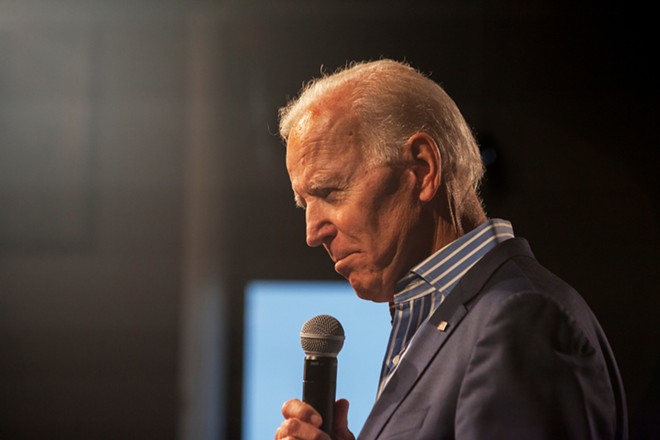 When it comes to marijuana, Joe Biden is behind the times.

The 76-year-old former vice president said Sunday that he’s opposed to legalizing weed because it could be a “gateway drug,” a position that separates him from most of his Democratic opponents.

At a town hall in Las Vegas, Biden said more research is needed to determine whether marijuana use leads to more harmful drugs.

“The truth of the matter is, there’s not nearly been enough evidence that has been acquired as to whether or not it is a gateway drug,” Biden said. “It’s a debate, and I want a lot more before I legalize it nationally. I want to make sure we know a lot more about the science behind it.”


In 2010, Biden said it would be a “mistake to legalize” marijuana because “I still believe it’s a gateway drug."

Biden’s response comes at a time when support for marijuana legalization is at an all-time high. A new poll by Pew Research Center found that 67 percent of Americans support legalization.

According to the National Institute of Drug Abuse, research shows that "the majority of people who use marijuana do not go on to use other, 'harder' substances.” An Institute of Medicine report found that marijuana “does not appear to be a gateway drug to the extent that it is the cause or even that it is the most significant predictor of serious drug abuse; that is, care must be taken not to attribute cause to association.”

“Marijuana should be legalized, and drug consumption should be decriminalized,” Rep. Alexandria Ocasio-Cortez, D-N.Y., tweeted Sunday. “These are matters of public health.”

Others noted that marijuana prohibition has led to mass incarceration, disproportionately impacting people of color.

Recreational marijuana is legal in 11 states, including Michigan.

Biden’s position on marijuana has softened since he was a senator. In 1986, Biden introduced anti-drug legislation that would have imposed mandatory minimum sentences for certain drug convictions and created a drug czar position.

Biden also was a zealous supporter of the notorious 1994 crime bill, which led to the mass incarceration of nonviolent drug offenders.

Delaware Senator Joe Biden on the floor in 1994, defending his crime bill against the charge that it wasn't tough enough. "There are 60 new penalties, 60 new death penalties! Brand new! 60!" pic.twitter.com/mtUQ3B74P7


On Sunday, Biden said he supports medical marijuana, but he’s not ready to back legalization for recreational purposes.

“It is not irrational to do more scientific investigation to determine, which we have not done significantly enough, whether or not there are any things that relate to whether it’s a gateway drug or not,” Biden said. “I don’t know enough to know whether it is, although I’ve done a great deal of work on the drug side of this issue.”

Marijuana isn’t a gateway drug but Joe Biden is a gateway conservative.