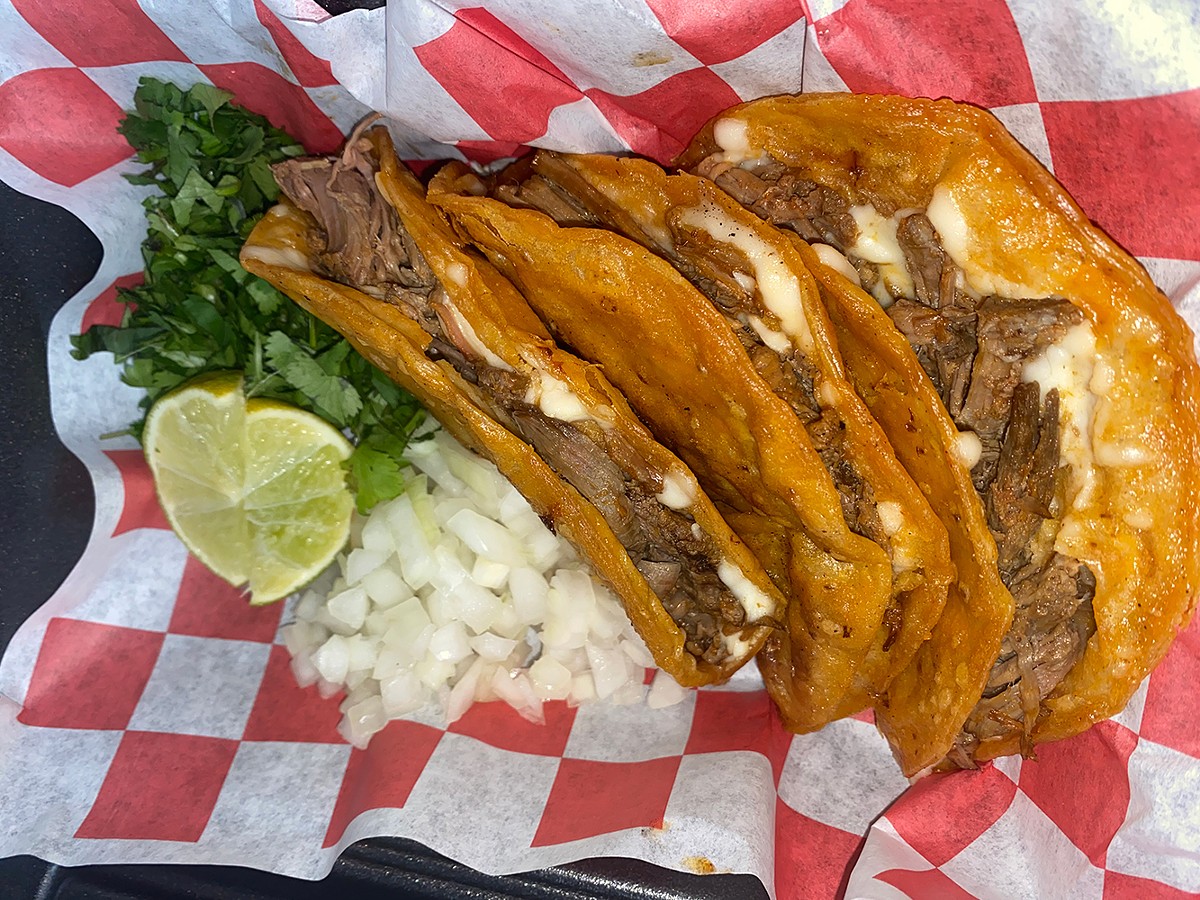 Birria is a slow cooked, stewed meat dish native to Jalisco in Mexico — and now it’s catching on in Detroit.

Detroit and the world are full of dishes worthy of a positive review, that warrant the attention of food writers and the public, and the birria quesadillas with consommé served out of the Antojitos Southwest food truck fit in with that group. But it should be noted straightaway that the dish is much more than that — it's a rare instant favorite. Like the best dishes out there, the birria quesadillas, or "birriadillas" as they're billed, are accessible, but deceptively rich and complex with deep flavor built from simple, common ingredients that most people use or understand.

Antojitos, which parks at Bagley and Sharon streets near Southwest Detroit's border with Corktown (and which shouldn't be confused with Antojitos El Catracho, the awesome Honduran spot in Southwest Detroit), is the first Mexican eatery in the area to focus on birria. The slow cooked, stewed meat dish is native to Jalisco on Mexico's west coast, where it's mostly done with goat, though beef is standard in the states. It's been a trendy taco on the U.S. coasts for a few years and, largely thanks to Antojitos, finally seems to be catching on here.

A layer-by-layer look at how Antojitos achieves such extravagance in its birria helps explain the buzz. It starts with beef that's browned before simmering for hours in its juices, leaving it super tender while building the fatty base for the hearty quesadillas' big flavor. Garlic, onion, cumin, oregano, and a range of other spices and aromatics stew with the meat, while guajillo, a brightening chile, adds a component that's more tangy and fruity than spicy. It's rare that I use the word "luxurious" to describe meat, but that fits Antojitos' birria.

The chef then wraps the meat in a shell, but not just any plain old corn tortilla — they take the oil from the birria, heat it up on the flat griddle, then fry the tortilla in it. That achieves two things. It deepens the package with another interesting flavor layer and addresses the textural needs by creating a crunchy counterpoint to all the tender beef.

But Antojitos still isn't done. It adds a handful of mozzarella cheese (surprisingly, not Oaxacan), which also compounds the depth in texture and flavor. But that's STILL not deep enough — the birria juice is repurposed as a consommé, which allows the diner to ensure that each bite is awash in the rich, high fat broth. Finish it with diced onion, cilantro, and a squeeze of lime for more flavor and textural depth, and the incredible package is complete.

Co-owner Jessica Perez says the recipe belongs to her mom, Gloria Contreras, and Antojitos is a family operation that was launched when the latter lost her job during last year's lockdowns. Though Contreras didn't have any restaurant experience, she had always wanted to run a kitchen and had a good birria recipe in her Rolodex, so she seized the opportunity by launching a pop-up run out of her Southwest home during mid-2020. It was an instant hit on word of mouth alone, so the family took the next step and purchased a food truck that they got up and running early this year.

Judging by the long lines and social media fervor, their success is continuing, in part because they also apply the birria and consommé to their ramen. It works as the best ramen has deep, rich, complex broth, and Antojitos birria consommé checks all those boxes. The soup is studded with crunchy bits of red cabbage and diced onion, and is finished with a coating of cilantro. The dish is among the few Mexican-Japanese mash ups I've encountered, and it's a stroke of genius, though Perez says her family didn't invent the concept — they tried something similar at a taco truck in California while visiting family and have put their own spin on it.

Antojitos' asada fries are composed of a mound of krinkle diced bits of flavorful asada meat, nacho cheese sauce, sour cream, pico de gallo, and avocado. It's a solid dish, but the fries weren't quite cooked enough, which was the only negative that I could find in my two visits. Drinks are grabbed from a cooler and include 20 ounces of pop and water. The menu offers three options, and while Perez says it'll be expanded in the months to come, there's already enough reason to keep going back.