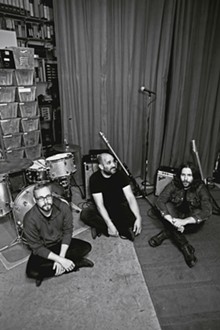 "'Oh fuck' can be such a powerful prompt, you know," says David Bazan, aka Pedro the Lion, when recounting the experiences that have led up to his latest record, Phoenix. Back with his first record since 2004, Bazan says it took hitting rock bottom to bring him full circle and begin the process of writing what could be his most introspective record yet. Twenty years after his first release as Pedro the Lion, Bazan revisited his childhood home in Phoenix, Arizona, to rip open wounds, pour salt in them, and get a hell of a record out of it.

Though Bazan had been home many times before his incendiary trip in 2016, he explains that his unique perspective from "the bottom" is what triggered him to revisit his old haunts. "When I really realized how close to the bottom I was, I happened to be down there," he says. "It was on that drive on my way out of town that it just kind of hit me — there's stuff to do here. You feel this way because there's ghosts here. There's unprocessed pain and feelings and joy, and you need to process that stuff in an organized way."

Bazan spent that drive with his voice memo recorder on, passing by old landmarks and recalling memories that had been buried a lifetime ago. Those stories were the root of the record to come — appropriately named Phoenix for the town by which it was inspired, but also to symbolize Bazan's rising from the ashes of his lowest low to being OK again; not great, not perfect, but better.

He doesn't get into too much detail about what ghosts needed to be worked out, but Bazan does say he moved around a lot as a kid. He grew up in the cultural and literal desert of Phoenix until he was 12, then lived in four other towns before landing in Seattle at age 15. Looking back, he realizes the transient nature of his childhood may have left a lasting mark on his psyche. "I think it was harder than I really let on," Bazan says. "That's been a lot of the problem I've been trying to sort by making this record, and the next few records I make will probably have something to do with this."

The hint at future records is a triumph for fans and also an indication that the healing process is far from over. Instead of weaving tales with other protagonists as he's done on past records, Bazan is setting himself front and center, to be torn up and rebuilt again from the core. Sounds like the most intense therapy someone could go through, really.

But through it all, Bazan maintains a kind of stoic awareness and gratitude not found in most white guy rockers. In short, he's woke as hell. In fact, his tour last year focused on restructuring his past records in a format that addressed toxic masculinity and oppressive societal ideals. "I couldn't just go out and do a nostalgia run — it had to have some meaning to it," Bazan explains. While much of his music critiques machismo rock culture, he admits that it can come off as offensive at face value. By arranging his catalog in a particular order, he was able to weave a story of triumph over misogyny.

"It was a way to play the old catalog in a context that showed what the original intention was, even if I simultaneously misunderstood and added to the problem myself," Bazan explains. Sounds like someone who is actively working on understanding and addressing their privilege while taking responsibility for the past, which is something that can't really be said for most 40-something, male indie rock veterans.