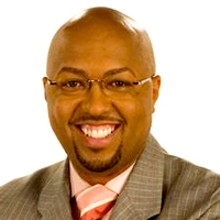 In my mind, to prepare for my Out To Lunch date with Charles Pugh was like getting ready for prom but without the tacky corsage. Seen by millions of viewers on FOX2 Detroit and heard by millions of others blaring his signature phrase, "Traffic is backed up and jacked up," during his road report on Detroit's WJLB, Charles Pugh is one of the Motor City's most talked about on-air "personalities," and an outspoken member of Detroit's gay African-American community.

With every strand of hair curled and rocking a trendy oversized purse, I enter Pugh's place of choice for lunch, downtown Detroit's Hard Rock Café. Met at the door by a spunky hostess, I request to be seated somewhere quiet. She turns around and quickly scans the restaurant, then laughs, "There really isn't a quiet place in here," as No Doubt's "Hey Baby" blares. "But there is a corner in the back where I could seat you that's at least a little more private."

I order a drink and wait for Pugh. Two sips into my surprisingly strong Irish coffee, my cell phone rings. It's Pugh. Hoping he isn't calling to cancel, I answer with an apprehensive "Hello?"

"Hey, sweetie, I'm just getting downtown and I'll be there in a few," he says.

I quietly sigh in relief and am impressed by the considerate call.

Before hanging up, he urges, "You should stop in the café gift shop! My boyfriend Michael works there."

I quickly realize why Pugh wants to meet here. Minutes later, the well-dressed Pugh buzzes in and waves at the staff. A few of them respond with a welcoming, "Hey, Charles," certifying him as a regular.

"I didn't know you were going to be so damn cute!" he flatters.

I bashfully giggle "thank you," secretly reveling in having my stilettos and matching handbag noticed, and we sit down for lunch.

Clearly no amateur at conducting or giving interviews, the 36-year-old Pugh quickly orders an Irish coffee of his own and launches into a lengthy and sometimes comical "soliloquy" about his past.

A Detroit native, Pugh faced tragedy early in life. His mother was murdered when he was only 3 and, just four years later, his father was shot and killed, leaving 7-year-old Charles to call 911. Despite these hardships, Pugh went on to flourish. Raised by his grandmother, he came up through the Detroit Public School System and graduated with honors from Murray Wright High School. After joking with me about "looking like the Renaissance High" type, he confesses to originally wanting to go to Cass Technical High School.

After graduation, the proud Murray Wright "Pilot" went on to the University of Missouri, where he studied broadcast journalism. His goal was to be on the air in Detroit — a major media market — before his 10-year high school reunion. After stints with television stations in Topeka, Kan., Fort Wayne, Ind., and Norfolk, Va., Pugh was hired by WJBK Fox 2 and returned to Detroit in June of 1999, meeting his goal with two months to spare.

After ordering the jazzed-up house salad with bacon and dried cranberries, I was surprised to hear Pugh order the Blue Ribbon Burger medium rare with mushrooms on the side. For some reason I figured he would get a salad or something light.

"It's weird, you know, to think I have been here since 1999. I actually had a woman come up to me recently and say, 'Charles, I have been watching you since I was in middle school.' It completely blew me away that I have an audience that has literally grown up watching me, a gay African-American reporter."

"So many young people never see any normal gay people; they see the extremes because those are the people who are most noticeable. Those are the most obvious among us, but those are the minority. I can think of 10 negative images of gay black men in the media right now: You had Anton and André from In Living Color, Eugene from the Steve Harvey morning show, the flaming black flight attendant on Soul Plane. ... To be honest, gay black men are always portrayed as a joke in the media and — damn it — I am not a fucking joke. I am a real person. I fall in love, I follow sports, I mess up sometimes, I eat, laugh and cry just like everybody else. I want to show that me being gay does not overpower any other part of my life."

In this moment I was tempted to call over our waitress and order a small piece of humble pie, as I thought of all the stereotypes I had brought to lunch. Even I, a self-professed intelligent person, had come to believe that all gay men were salad-eating, martini-sipping flamboyant fashonistas, kings of one-liners with an affinity for the word "fabulous."

Our especially accommodating waitress comes buzzing by to clear plates and ask for dessert.

"You all set with that?" she asks Charles, referring to the bit of burger left on his plate.

"Hell, naw!" he laughs, "I'm eating all of this, and I might order another one!"

I chuckle and start into my second Irish coffee and ask him one more question: if being a public figure and a possible role model affected his approach to coming out.

"At the end of the day I think Detroiters want honesty. They at least respect me for being honest. As a man, you stand up and you play the hand you're dealt," Pugh continues. "There might be some people who have a hard time accepting it, but I have faith in Detroiters that they're not all petty, that they're not bigots, that they'll continue to look at me as a professional newscaster who cares about Detroit."