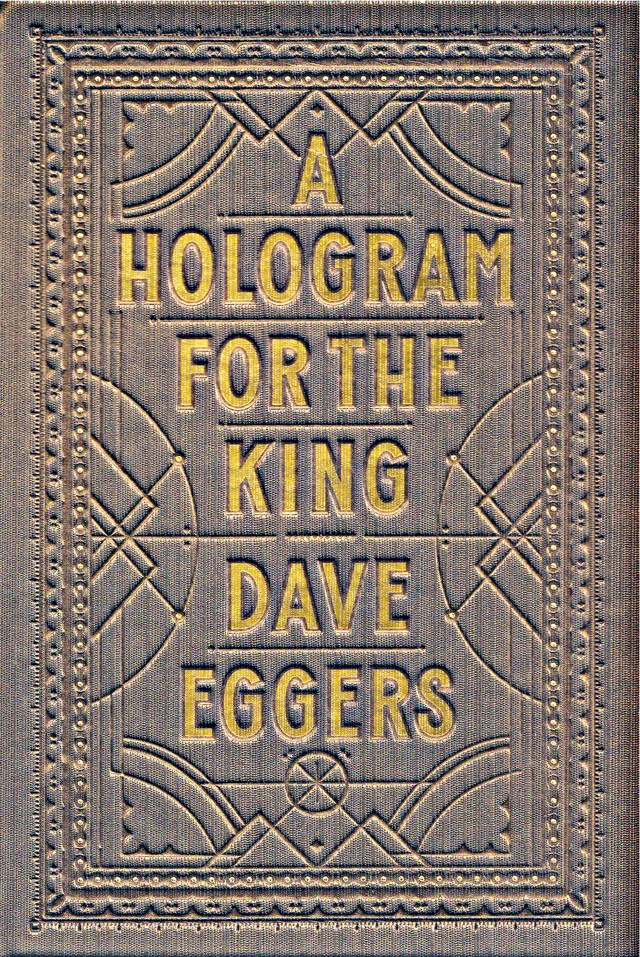 p class="p3">A Hologram for the King

We are the holographic men "shape without form, shade without color/paralyzed force/gesture without motion," as T.S. Eliot put it in 1925, when America was on the upswing.

Now, everyone seems to agree: America is in decline. We used to make shit. Now we don't make anything but Marvel movies, financial products and empty holograms. (And if Otakon is any indication, the Japanese are beating us in pop culture too.)

It's hard to sit at a bar for more than five minutes without hearing some version of this complaint. And not just from blowhards on the news above the bar, but from the average guy sipping his Boh. Given the history of industry in the Rust Belt, which long ago settled into a long, slow decline, it is easy to see why.

Dave Eggers' A Hologram for the King presents us with the Great American Novel for this not-so-great America. The main character, Alan Clay, was "born into manufacturing and somewhere later got lost in worlds tangential to the making of things." He has the same relationship with his World War II vet father as Hank Hill and his tough-as-nails dad on the animated show King of the Hill: His father doesn't respect him or his decisions.

Alan works for Schwinn bikes, but ultimately sends the business away, first to Hungary and finally to China, where a vast majority of bicycles are now constructed. He has failed his business, his (insane) wife, his daughter, and his best friend, who, trying to be a Thoreauvian transcendentalist, freezes to death in the pond behind Clay's house.

We learn all of this in the first couple pages, as Alan contemplates the failure of his generation raised on the fruits of American production, now fit for nothing but consumption. "But he hadn't known at the time that his decisions were shortsighted, foolish, or expedient. He and his peers did not know they were making decisions that would leave them, leave Alan, as he now was virtually broke, nearly unemployed, the proprietor of a one-man consulting firm run out of his home office."

Clay made things so efficient that he became superfluous. He finds himself with one last chance to be useful, trying to sell IT infrastructure to Saudi Arabian King Abdullah's Economic City, which, as it turns out, has also been largely undone by the economic collapse. This brand-new city, intended to be built from scratch, out of the desert, is nothing but infrastructure, roads, and canals but no life. Alan knows nothing of IT or holograms, but he once knew the king's nephew. "Elsewhere, relationships no longer mattered, Alan knew this. They did not matter in America, they did not matter much of anywhere, but here, among the royals, he hoped that friendship had meaning."

Of course, it doesn't. A Hologram for the King is an update of Kafka and Beckett, a constant waiting for a royal audience that never arrives as Clay spends day after day in a tent with no Wi-Fi and a trio of 20-something techies who do nothing but sit in the corners and test their signals. Their whole purpose is, after all, to give a holographic presentation to the king.

We've all seen these holograms now. During election night 2008, CNN spoke to a hologram of Will.I.am in perhaps the lowest moment in the low history of punditry. At the most recent Coachella, a holographic Tupac Shakur pranced around the stage, dissing contemporary emcees with his ghostly appearance.

The hollowness of holographic images becomes one of the central metaphors of the book and Eggers' view of postmodern America. They are nothing like a beautiful, functional bicycle, one of the presiding images in modernist literature from Henry Miller through Flann O'Brien.

Nevertheless, whatever we imagine the world to be, it is still made of matter, as are our bodies. The growth that Clay (get it?) finds on his neck, probes with a steak knife, and ultimately has removed by a beautiful Saudi female doctor, with whom he improbably skinny-dips, is the other dominant image, insisting we are still frail, physical beings.

When the Saudi doctor wants Alan to sleep with her, he is unable to. There is a deeper level of sexual frustration than middle-aged impotence, however. He thinks about how much simpler life has been since he gave up sex eight years earlier. But as Alan laments the debt that makes him unable to pay his daughter's tuition, a single paragraph suggests that he has avoided sex because he had some kind of sexual situation with his daughter.

It is only a hint, though, another kind of malaise, another way in which his desire has failed him. Like Eliot's "The Waste Land," Hologram shows our emptiness through a masterful pastiche of styles from a previous era. At moments, it reads like Graham Greene's far-flung reports on British decline, full of political intrigue. But the political intrigue goes nowhere. A sojourn with his Saudi driver and a wolf hunt in the hills echoes Hemingway but then collide with Camus as Alan almost shoots an Arab by accident. Like Italo Calvino's If on a Winter's Night A Traveler, Eggers' book creates a successful new book from a series of beginnings.

To his credit, one of the only writers whom there is little trace of is the earlier Dave Eggers, famous for the postmodern confessionalism in A Heartbreaking Work of Staggering Genius or the earnestness of his more recent and excellent books of reportage.

Hologram is not just a book of regret and emptiness. It strikes a new note for Eggers with its pervading sense of gallows humor. Alan loves corny old jokes with setups and punch lines, but they inevitably fall flat. Early in the novel, he meets a man in a situation similar to his own. The man is drunk, giving up and retiring to France. He laments, "It's the black humor that really does it ... that dark sarcasm. It's the killer, I swear to God. That's the sign you're down and can't get up!"

Eggers tells us that Alan disagrees. He does not believe this. And it seems that Eggers, known by his publishing (McSweeney's and The Believer) and educational projects (826 Valencia) as hopeful and serious, doesn't agree either. Though lacking in sarcasm, A Hologram for the King suggests that the only hope for our declining nation may lie in dark gallows humor and the literature that carries it.