Healers or dealers? The battle between Detroit and its dispensaries begins 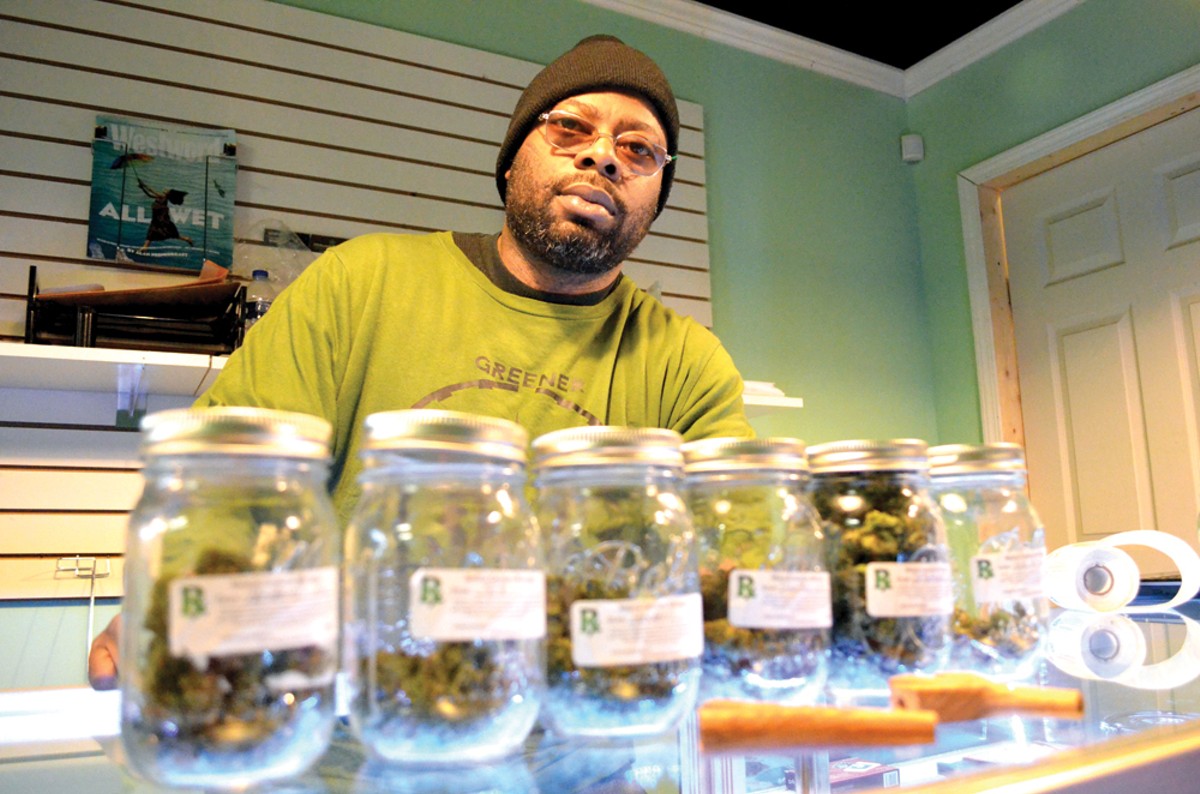 The Family Trees dispensary near Seven Mile and Plainview sits within eyeshot of a vacant liquor store and small storefront church, which are less than 1,000 feet away.

As of April 1, that means Family Trees is breaking the law. While the business has provided marijuana to patients at the location for two years without incident, owner Reginald Venoy, like many of Detroit's dispensary operators, faces an uncertain future.

Will the police kick down his door and seize his marijuana and assets? Or will he answer a knock at the door to find he's being served? Or will nothing happen?

After months of anticipation and hand wringing over a confrontation between the city of Detroit and several hundred dispensary owners, the two sides fired their first shots last week.

But the next chapter mostly won't include the aggressive, dramatic police raids some feared. It will instead play out slowly in Wayne County Circuit Court. The April 1 deadline for dispensaries to file their applications with the city passed, and several cases have already landed on judges' dockets.

Butch Hollowell, the city's chief attorney, assures the Metro Times a lawsuit his office filed against the Amsterdam of Detroit dispensary on Seven Mile is "the first of many more to come," and that suit reveals the city's blueprint for handling incompliant dispensaries.

In the suit, Hollowell asks a judge to declare Amsterdam of Detroit a public nuisance because it's in a drug-free zone that's 1,000 feet from a day care, and Hollowell wants the judge to order it "padlocked and shuttered."

The city was also on the other side of a lawsuit, and could soon be defending itself in a second. A judge dismissed the first case Friday after the plaintiffs, 10 dispensary owners who claimed their businesses should be grandfathered, dropped the suit.

"We are confident that the city's medical marijuana regulations are lawful, fair, and reasonable," says city communications director John Roach in a statement. "We will continue to enforce compliance in the courts, while concurrently processing the applications submitted for medical marijuana caregiver center licenses."

Another suit filed by Sons of Hemp and eight other plaintiffs also asks a circuit court judge to essentially grandfather their businesses. They also allege their 14th Amendment religious freedoms are violated. Hollowell says the city has yet to be served.

At stake in court is the fate of more than half of approximately 225 dispensaries operating in Detroit. Dispensary owners and activists say the ordinance is extreme and will needlessly decimate a thriving business community that provides a much-needed health service.

That's an issue to Venoy, who expresses frustration over being labeled a "nuisance." He also questions the sense in shutting down a strong business over a nearby storefront church and derelict liquor store.

"We're thriving businesses and people need their medicine, so why shut down something that's helping people and the community?" Venoy asks. "And a liquor store has more crime, but they're allowed to stay open even though there haven't been many crimes at dispensaries throughout the city — a few break-ins, but that happens almost anywhere in Detroit.

"So why would you want to shut down a thriving business to make another hundred buildings vacant? That don't make sense."

Dispensary and grow operation owners across the state have asked the same questions in recent years as Michigan's local municipalities quilted a constellation of laws to address the facilities. The 2008 Michigan Medical Marihuana Act allows caretakers to provide 12 plants for up to five patients, plus another 12 plants for themselves — 72 in total. But the law does not address the possibility of retail sales, dispensaries, or caregiver centers.

In Detroit, police mostly left dispensaries to operate freely, despite a state Supreme Court ruling in 2013 that allows medical marijuana dispensaries to be declared a public nuisance.

The ordinances allow facilities in B2 and B4 zones, as well as M1 through M4. In addition, the zoning ordinance requires dispensaries to operate 1,000 feet from arcades, liquor stores, other dispensaries, child care centers, libraries, outdoor recreation facilities, schools, and other institutions.

Operating in violation of the zoning rules is a misdemeanor punishable by up to 90 days in jail or a $500 fine.

The regulatory ordinance — which is separate from the zoning ordinance — requires the business owners to apply for a license after their zoning is approved.

Under the zoning laws, 651 parcels citywide qualify as a potential dispensary site. Critics say that while there may be 651 parcels where a facility could operate in theory, there are far fewer when unusable or occupied property is taken into consideration. That's forcing the dispensaries to locations that are more difficult for patients to access, or are in less safe industrial parks.

Dispensary owners and activists are particularly miffed by the inclusion of the provision that requires dispensaries to operate 1,000 feet from churches, which they say raises questions over the separation of church and state.

"The churches don't pay any taxes, and while we should be sensitive to the entire community, I don't think religious institutions deserve a special carve-out," says Matt Abel, an attorney with Cannabis Counsel.

The law also bans the sale of edibles, limits hours of operation, and bans drive-thrus. Trevor LaFond, who owns Green River Meds on Grand River, says his business pulled its edibles, but that's a serious disservice to those who need to ingest marijuana without smoking.

"I don't see any logic in that whatsoever," he says. "They're trying to say kids can get a hold of edibles, but kids get a hold of a lot of things. Edibles won't kill them like other things will."

The legislation generally creates a situation in which patients and caregivers are open to criminal prosecution, says Greg Pawlowski, an attorney with Citizens for Sensible Cannabis Reform. Like many dispensary owners, he's baffled by many provisions, and he tells MT their inclusion was the work of a mostly unknown NGO called the Detroit Coalition for Action.

"There wasn't an open and transparent process from the start," Pawlowski says. "This was in play for over a year, and people from all sides didn't have a good amount of time to help craft this piece of legislation. The Detroit Coalition for Action wrote most of the ordinance, and that organization ... created criminal activity instead of protecting patients."

The law is such an issue to Pawlowski that he and the Citizens for Sensible Cannabis Reform are trying to put it up for a vote in the August primary, and filed one of the three medical marijuana-related lawsuits existing in circuit court after the city rejected its petitions.

Pawlowski says the deadline for submitting petitions to get the issue on the August ballot was 9 a.m. March 1. The group turned in signatures at 8:54 a.m., he says, but the deadline was 5 p.m. Feb. 29. It will be up to the court to decide who is correct.

If the Citizens win, then Detroiters could vote on repealing the law in the August primary.

Regardless of what happens with that case, Hollowell and the city are asking a judge to declare Amsterdam of Detroit a public nuisance based on its operation in a drug-free zone.

In the complaint, Hollowell asks the court to allow the city to shutter the business and to "prevent access to the public, and to confiscate all illegal narcotics, weaponry, any form of marijuana, including plants and equipment for the purpose of cultivating, distributing or ingesting marijuana, together with any proceeds from the sale of marijuana found on site ... "

In other words, the city wants to shut down the business and take everything it owns.

Hollowell says the city is choosing to sue instead of ordering police raids because "this approach is a permanent resolution with binding court orders."

In documents submitted to the court, the plaintiffs write they have "served as ordained healers of the community" for up to 20 years, and the businesses are "an extension of the plaintiff's sincerely held religious beliefs by facilitating their mission as ministers to help people create, celebrate, and build better health as defined by the Holy Bible."

Attorneys for the plaintiffs declined to comment, but others within the city, like Richard Clement, chief of staff to Detroit City Councilman George Cushingberry and card-carrying patient, see things differently than Hollowell.

"We need a law that's more inclusive instead of exclusive," he says. "They're wiping out all the business that are owned by native, African-American Detroiters, and these are people living in the city of Detroit, who grew up here, who pay taxes here, and this ordinance is adversely affecting them."

Ultimately, the city's law and its dispensary owners don't see the businesses the same. One side says they are healers, and the other says they are dealers.