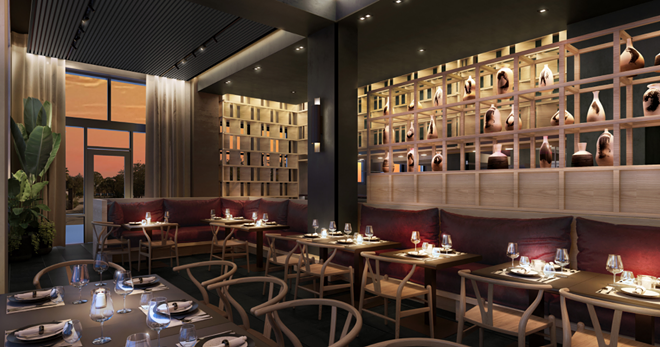 Courtesy photo
A rendering of the forthcoming Basan restauarant.

The operators of a new restaurant planned for the ground floor of the former Eddystone hotel near Detroit's Little Caesars Arena have announced new details of the project.

Four Man Ladder Management, which also operates the nearby Grey Ghost restaurant and Second Best bar, says the new spot will be a Japanese-style izakaya called Basan, named after a mythical fire-breathing bird.

According to a press release sent Monday, the restaurant's menu will be robatayaki-style. Robatayaki cuisine is traditionally cooked over hot charcoal on a wide and flat fireplace.

"Given the historic Eddystone’s proximity to Little Caesars Arena, we knew this concept needed to match the incredible energy and vibrancy found within The District Detroit and appeal to a wide variety of guests," chef John Vermiglio said in a statement. "The izakaya style of dining felt like a natural fit. Our guests will be able to craft their own experience, whether that’s a pre-game stop for cocktails and a quick bite or a more curated, multi-course dinner."

The owners say the restaurant will seat 85 people inside and 26 on an outdoor patio, while it will also feature a private dining space and lounge area with a bar. Basan is expected to open next year at 2703 Park Ave.

The restaurant was first announced in August. More information is available at basandetroit.com.

An izakaya is a type of Japanese bar that serves alcohol and snacks to an after-work crowd.

A short-lived izakaya-style restaurant in the nearby Woodbridge neighborhood called Katsu closed in 2019, replaced by a new spot called Bash Original Izakaya.