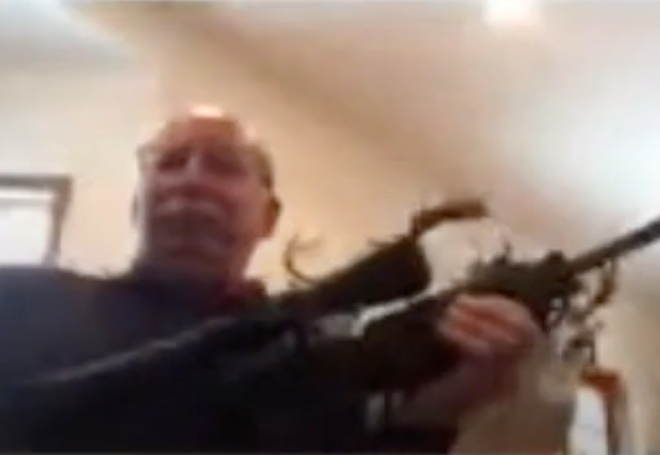 A 74-year-old woman is filing a federal lawsuit against Grand Traverse County and a commissioner who pulled out a semiautomatic rifle during a virtual public meeting.

The incident occurred on Jan. 21 when local resident Keli MacIntosh, who was speaking during a telephone comment period, asked county commissioners to denounce the far-right Proud Boys after the deadly riot at the U.S. Capitol on Jan. 6. Her concern was that commissioners were glorifying gun violence after they made the county a Second Amendment "sanctuary."

As MacIntosh was talking, Commission Vice Chair Ron Clous, a Republican, walked out of the frame and retuned clutching a rifle. Commission Chair Rob Hentschel responded by laughing, even as MacIntosh continued to express her concerns about right-wing violence.

In a lawsuit MacIntosh plans to file in U.S. District Court Court on Monday, she is asking a judge to deem Clous’ behavior illegal and unconstitutional and order that it never happens again.

In a statement Friday, her attorney, Blake Ringsmuth, of the law firm Ringsmuth Wuori, PLLC, said he is “standing up for the rights she and the rest of us cherish and see that they not be taken for granted, here in Grand Traverse County, or anywhere else in this great country.”

After the meting, MacIntosh said she received threatening phone calls and “lives in fear, given how groups such as Proud Boys response to those who don’t share their beliefs,” according to a news release.

Hundreds of people have called for the resignations of Clous and Hentschel.

The Michigan Attorney General’s Office said in February that it’s investigating the incident.