Go to hell, America’s Thanksgiving Day Parade, a ‘Golden Girls’ parody, and more things to do in metro Detroit this week 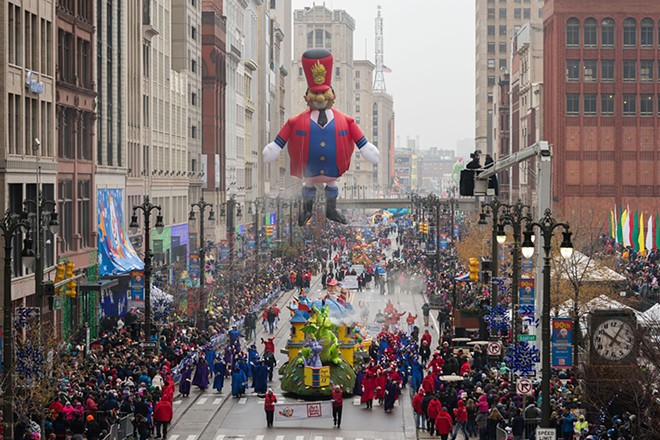 Tuesday, 11/23-Sunday, 12/5: We imagine the road to Hell is paved in, well, probably a number of things, including but not limited to Jeffrey Epstein, McDonald's McRib sandwich, Kid Rock's discography, Dancing with The Stars, memes, Trump's tax returns, and bad musical theater. (Spider-Man: Turn Off The Dark, we're looking at you!) But then there's "Road To Hell," the opening song to the eight-time Tony Award-winning Broadway musical, Hadestown. Written by singer-songwriter Anaïs Mitchell and directed by Rachel Chavkin, Hadestown has been hailed as a heavenly musical about hell as it takes Greek mythology and plops it smack dab into a bleak, post-apocalyptic, Depression era-esque world, all while managing to weave together two love stories — Orpheus and Eurydice and King Hades and his wife Persephone. The musical, which also took home a Grammy award last year for Best Musical Theatre Album, tackles some of time's most persistent philosophical issues, big and small, only to remind us that the more things change, the more they stay the same, above ground and below it.

Thursday, 11/25: Listen, we're the first to take any opportunity to list off all the reasons why Thanksgiving sucks. There's the mass turkey slaughter, the obligatory family facetime, and the fact that the beloved holiday is built on blood, colonization, and the attempted erasure of Native Americans, you know, the people that were here before Chr*stopher C*olumbus fucked shit up. But we're putting our Debbie Downer tendencies aside, right next to the mashed potatoes, because there's something particularly special about this sordid holiday: America's Thanksgiving Day Parade. A nationally televised Detroit tradition, the parade returns for it's 95th year and, unlike last year's televised-only, crowd-less, and pandemic-proof event, it's happening live, with Captain Underpants and all. This year, the Gardner-White-sponsored celebration will welcome some old standbys (we love you, Kermit!) as well as some star power via the parade's grand marshals. NFL hall of famer and former Detroit Lions wide receiver Calvin "Megatron" Johnson will host the parade alongside Second Ebenezer Church's Bishop Edgar Vann, as well as honorary grand marshal, longtime WDIV vice president, Marla Drutz. Want more? Romeo-based singer-songwriter Rachel Mac, who landed herself as a finalist on NBC's The Voice earlier this year, will perform following a performance of "Circle of Life" by the touring cast of The Lion King musical, featuring members of the Detroit Youth Choir. Of course, the star-studded lineup could not be completed without an appearance from the man himself, Santa Claus, who will show off his loot and badass sleigh. As with previous years, the parade kicks off at 8:45 a.m. from Kirby Street and will travel downtown along Woodward Avenue with floats, marching bands galore, and big heads (our personal favorite) — and we're all invited. —Jerilyn Jordan

The parade begins at 8:45 a.m. at Kirby and Woodward Ave.; theparade.org; Event is free.

Friday, 11/26-Monday, 12/20: It's been nearly 30 years since The Golden Girls went off the air, yet, Miami's most beloved GILFs (sorry, not sorry) Blanche, Rose, Dorothy, and Sophia have amassed even more fans since the series finale in 1992. If celebrating the holiday with the sitcom's two Christmas episodes (including the one where the girls are held hostage by a man dressed as Santa Claus at the Grief Counseling Center) isn't enough, Ferndale's Ringwald Theatre has something, well, golden, up their sleeves. A Very Golden Girls Christmas vol. 2: An Unauthorized Parody is billed as a love letter to Golden Girls fans and will follow Rose as she prepares to direct the center's Christmas pageant, but is thwarted when food poisoning ravages the cast leaving it up to her and her roomies to save the day. Directed by Suzan M. Jacokes, the idea comes by way of Dyan Bailey and Christopher Kamm with our main girls being played by dudes, because what would an unauthorized parody be without some playful gender-bending? —Jerilyn Jordan

Saturday, 11/27: Earlier this month, Gov. Gretchen Whitmer signed House Bill 5267, which repealed Michigan's 6% sales tax on menstrual products like pads, tampons, and menstrual cups. Michigan is only one of 21 states without a "pink tax," which is pretty wild when you consider the fact that the U.S.'s menstruating population spends an estimated total of $150 million on the tampon tax per year. While this is a big step in the movement toward equality (women are still getting paid $10,157 less per year than men, by the way) providing access to menstrual products is vital work. Returning for its fourth year in doing this work is For The Girls, a non-profit charity pop-up put on by Detroit's Old Soul Vintage, which aims to raise funds or tampons and pads (no cups as many people don't have safe/hygenic ways to dispose and clean) for unhoused women, as well as trans and non-binary people. The event will host 15 local art, clothing, vintage, and houseware vendors as well as performances by five local music acts, including Adelaide, Jack Oats, Chicki Baby & the Bash, Tears of a Martian, and TY. Old Soul Vintage will distribute 100% of the event proceeds to Corktown Health Center, which services the local LGBTQ+ community and I Support The Girls-Detroit, which provides bras and menstrual products to the unhoused. Per a press release, in past years, this event has raised thousands of dollars and multiple car loads in physical donations to those in need. Can't make the event but still want to help? Old Soul Vintage will be accepting in-person donations at their 3627B Cass Ave storefront until Nov. 30. —Jerilyn Jordan

Saturday, 11/27: Rising Gen Z DIY bedroom pop star Chloe Moriondo eats boys. Or so the Detroit native claims on their pop punk-steeped sophomore record, Blood Bunny, released earlier this year. "'Cause I eat boys/ Yeah, I get them gory/ You can't control me, 'cause I wrote this story," the 19-year-old sings on "I Eat Boys." Moriondo, who uses she/them pronouns, got their start on YouTube in 2014 (their channel has more than 3 million followers) and, only until Blood Bunny, does Moriondo say she's finally making the music she's always wanted to make. "I think a lot of young people around me in my generation started wanting to express ourselves more and wanted to lean more in the pop-punk direction because it's so fun and expressive," Moriondo told Metro Times. "I was definitely connecting back to my roots with Avril Lavigne and Hayley Williams and old Paramore when I was making the majority of Blood Bunny." Moriondo's influences are alive and well on the record. "What If It Doesn't End Well" feels like it belongs in the same universe as Lavinge's banger ballad "I'm With You," and Moriondo's "Bodybag'' could romp with Bif Naked's "Never Alone." But then there's a track like "Girl On TV" that feels like it could jump on a daisy-filled trampoline with Miley Cyrus circa her Flaming Lips era. A match made in, well, Michigan, Moriondo will be joined by fellow metro Detroit native and Triple Crown Records artist Shortly (aka Alexandria Maniak), who released her emotional Adrienne Lenker-crossed-with Mitski-sounding full-length record, Dancer, earlier this year. —Jerilyn Jordan

Latest in What’s Going On