George Lopez gets out of the barrel 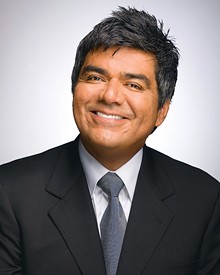 George Lopez loves Detroit. He loves the Fox Theatre. We've been good to him here in the Motor City, and he is good to us.

"I've worked hard my whole life," he tells the Metro Times by phone. "There's a feeling that I get when I'm there that I'm surrounded by people who have that in them. That they're tough and keep going. I like that about Detroit."

Lopez, speaking to us from the West Coast early in the morning, takes a moment to reflect on that working-class ethic. "Right now we're raising a generation that, when the going gets tough, the people who can't handle it, they go to therapy." And Mexicans? "Mexicans just drink and say 'Mama never loved me,'" he jokes. "She better just leave me the house!"

He shares with us a little bit about growing up, and bits from his act. "I was in a Coffee Bean and this father said to his son, 'Can you go get me some sugar?'" When the kid got back, the father said, "'You're walking great, and you did a great job walking.'" Lopez is clearly equal parts amused and astounded by the scenario. He says his family only complimented him when he did something wrong. "When I bought my first car, I was 18, and I crashed it. My grandfather said, 'Congratulations! How did you do this? By yourself? That's great!'"

We laugh at the joke with him. Lopez speaks about his first time going to Detroit's Mexicantown. "The first time you hear of it, you're like what the hell is that? But then they have a Poletown. There's great bakeries there. If I had two words to describe it, it's Mexican Town. Hey where do all the Mexicans live? All the families? Mexican Town."

"The one thing that is the common thing is it's a working-class town," he says of Detroit in relationship to his own experience. "They don't get hung up on where they live."

In Lopez's life, he says "there was never an expectation to succeed. What I've learned along the way is everything is possible through hard work, determination, and never giving up. I learned that on my own, and I learned that there was this kind of invisibleness of our culture."

"I look the way I look, and I couldn't do anything about that. If I looked light skin, I coulda passed, not having to talk about it." But, he looks Mexican, and he has no problem talking about it. "It's not always gonna be pretty," he says, "but it's always gonna be truthful."

He also talks about the working-class backlash to success. "There's no shame in being successful, but also remembering what got you there," he tells us. People will "think you're a sellout if you succeed. But you can succeed and your identity goes with you."

He compares it to "crabs in the barrel — an analogy with the Mexican people. There's something to that."

If you've ever seen crabs in a bucket, they all struggle to get out, but in that effort, they end up pulling themselves and each other down. None of the crabs are able to get out.

Another thing he notices about the culture: "I think that we would always compare ourselves to other people," and when someone is doing well, be upset or angry about it. "You should be happy for anybody doing well," he says. "When I started just taking care of me and my career," that's when he really started taking off. "'Why them and not me' is something we have to lose," he advises. "It's never gonna be you if that's how you think.

"Listen, I'm even shocked every day that it's me," he says, adding that "it's important to remain peaceful and not hurt people — that's very un-Mexican."

As you can see, Lopez speaks candidly about race, class, and culture. "It does make people feel uncomfortable," he tells us. "It is as prevalent in our society today as it always was."

Yet diversity, he says, is the future of this country.

Until then, he's going to keep telling jokes and talking about it. "I'm excited," he says, to come back to Detroit.

George Lopez will be at the Fox Theatre on Saturday, Nov. 8.