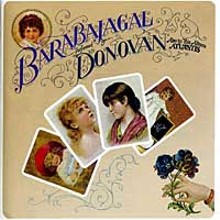 Vashti Bunyan – Just Another Diamond Day (Dicristina Star, 1970): She was a tree faerie Nico, or maybe the female Nick Drake. Bucolic British folk with a hushed, melancholic air; the confessions of a washerwoman

Donovan — Barabajagal (Epic, 1969): Lusty, organic ruminations on the fairer sex from the Scottish duke of psychedelic folk. Contains the classic “I Love My Shirt.”

Pentangle — Basket of Light (Edsel, 1969): British combo whose dramatic, virtuosic folk-rock conjures images of Dr. Who and the Wickerman. While often beautiful, their music is also exceedingly creepy. You’ve been warned.

No Neck Blues Band — Sticks and Stones May Break My Bones But Names Will Never Hurt Me (Revenant, 2001): A contemporary classic issued through Fahey’s personal label. Twisting rhythms, random noises, and fractured jangles add up to a record that envelopes you in its grasp.

Sun City Girls — Torch of the Mystics (Majorca, 1990): A haunting and freaky lullaby wrapped in Middle Eastern mantras and clanging, fractured rock ’n’ roll. Gets in your head and stays there, murmuring.

Van Morrison — Astral Weeks (Warner Bros, 1968): Captivating, uplifting work from Van the Man. “Beside You” is what morning dew sounds like; Astral Weeks is some kind of organic masterwork.