Shutterstock
Much of what set us up for inflation right now were corporate decisions made well before COVID.

Like many Americans, I’ve been thinking a lot about inflation — what causes it, why we’re experiencing it right now, and how it’ll affect my family. So I decided to cut into it, breaking down how it works and offering up an epidemiologist’s perspective in a two-part series. In part one, I broke down how the pandemic sits at the root of so much of what we’re experiencing right now.

Today, in part two of the series, I want to explore another major driver we’ve talked a lot about in these pages: corporate greed. 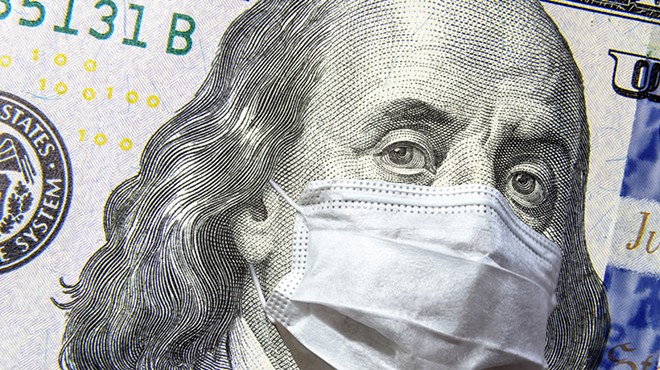 Inflation explained (by an epidemiologist)

Progressive economists — and more quietly, the Biden administration — have been making the case that the current inflation we’re experiencing is, at least in part, the consequence of corporate consolidation that allows a few behemoth corporations to exert monopoly power over critical products.

Take General Mills. You may know them as a cereal company, makers of favorites like Reese’s Puffs. But they also own baking company Betty Crocker, yogurt behemoth Yoplait, Annie’s (makers of the popular mac and cheese). They’ve been described as one of “10 companies that control everything you buy.” General Mills is raising prices by 20% in 2022. That's despite the fact that the company increased profits by 6% through fiscal year 2021.

Increased profits in 2021. Price hikes in 2022. This is a formula corporations across the country like Starbucks, Tyson Foods, and Chipotle are emulating. Amazon even raised the price of their Prime membership.

Today, I want to offer up four ways corporations have driven this inflationary moment. (Hint: Most of them have been behaving this way well before the pandemic.)

Corporate monopolies are hiding behind the inflation smokescreen to raise prices

Contrary to popular belief (and GOP propaganda) we are not actually a truly “free market” economy. One of the hallmarks of a true free market is free entry and exit. But money makes money, which is why the biggest danger to a free market isn’t government regulation (again contrary to popular belief and GOP propaganda), it’s monopoly. Corporations become so large that they crowd out, buy, or leverage government to prevent new entrants. As our economy consolidates, it allows a few actors in a given sector to collude to raise prices.

The public worry over inflation has allowed corporations in highly consolidated sectors to use inflation as a smokescreen to raise their prices — just like General Mills. This is what 3M’s Chief Financial Officer said on a quarterly shareholder call: “The team has done a marvelous job in driving price. Price has gone up from 0.1% to 1.4% to 2.6%.”

That quote is particularly poignant. What corporate executives are willing to say on earnings calls is often a lot more honest than what they’re willing to say publicly. On those calls, they’ve made it very clear that this moment isn’t really about inflation, it’s about profit. My friend Dr. Lindsey Owens, who heads up the progressive think tank Groundwork Collaborative, just published a report showing exactly how corporations used inflation to jack prices. You can read the full report yourself, but I think she did a great job distilling its biggest findings on Twitter.

If inflation is the product of too much money chasing too few goods and services, then how do you fight it? You have to take money out of the economy.

There are basically two ways to do this. The monetary approach involves raising interest rates. If an interest rate is how much you’ll have to pay to borrow money, then raising the interest rate literally makes money more expensive. If you follow the supply and demand logic, making money more expensive reduces the amount of money that businesses or households will take out in loans, effectively reducing the amount of money in the economy. But the interest rate is a blunt instrument, affecting everyone. Raising rates are particularly hard on small businesses who rely on lines of credit to stay afloat — and make payroll. Many of the dollars spent servicing debt or not borrowed at all because interest rates are too high are dollars that ultimately don’t end up in a working person’s pocket.

The second approach is fiscal: taxation. Unlike raising interest rates, taxation can be done progressively, tailored to the people with excess money currently overwhelmingly invested in large corporations.

You know how we’ve been talking about “taxing the rich”? Well, this might be a good time to do that. But whereas the interest rate can be finely tuned through the Federal Reserve, taxation requires an act of Congress. If you haven’t noticed, Congress hasn’t been great at doing much right now, let alone raising taxes. Why? Because corporations have spent billions of dollars lobbying Congress to make sure they don’t. Indeed, the last time Congress altered our tax policy, it resulted in one of the single largest transfers of wealth to the rich in U.S. history.

The Great Resignation is a corporate wage suppression issue

Inflation hasn’t been the only major economic change occurring in this moment. In 2021, nearly 5 million Americans left their job, sparking what talking heads are now, ominously, referring to as the “Great Resignation.”

Most of the debate around this workforce shift has focused on the unintended consequences of COVID relief. But that characterization only works if we ignore the context. For the past several decades, the median worker saw their wages stagnate while the average CEO saw their salary skyrocket. The pandemic raised the stakes for millions of workers — “why should I risk my life to go out in a pandemic to make the CEO millions of dollars?”

The suppression of wages was corporate policy. It, too, has to do with corporate consolidation. Not only can oligopolies collude to raise prices, they can also collude to keep worker wages in their sector low. And there’s strong evidence that they have.

Told correctly, the Great Resignation, one of the contributors to our current inflation, isn’t about workers “being paid to stay home,” rather, it’s about corporations having suppressed worker wages for decades — and workers deciding that enough is enough.

Globalization and its discontents

And finally, the story of this inflationary moment extends back to a set of policies made back during the Clinton administration

In 1994, when the North American Free Trade Agreement went into effect, President Clinton told us that the era of globalization was going to deliver an unheralded amount of consumer choice at unbeatable prices. But that era delivered — or took — a lot more. It shut down factories, cut jobs, and hollowed out a Midwest manufacturing corridor (and gave rise to Donald Trump, but that’s another story for another day).

That, too, was corporate policy. Big corporations chasing cheap (and dangerous) labor were the fundamental engines behind America’s push outward in the ’90s. The chickens coming home to roost are bringing inflation with them.

What’s worse is that fixing a supply chain is kind of like putting the dominoes back up after you knock them all down. It’s tedious and time consuming. While there’s been a push to bring some of that chain back to the U.S., those are multiyear projects that won’t do anything about the pain we’re feeling right now.

What does this all mean for you and me?

In part one of this series, I explained how the pandemic — the way it changed demand and disrupted supply chains — shaped this moment’s inflation. The good news on that front is that this pandemic will end.

The problem, though, is that corporate greed won’t. Much of what set us up for inflation right now were corporate decisions made well before COVID became part of our vernacular. Even if inflation begins to abate, we cannot lose sight of the kind of regulation we need — everything from raising corporate taxes to breaking up oligopolies — that we need to protect ourselves from the next one.

Originally published Feb. 17 in The Incision. It is republished here with permission. Get more at abdulelsayed.substack.com.