For Detroit producer Helluva, making beats is a tale of redemption 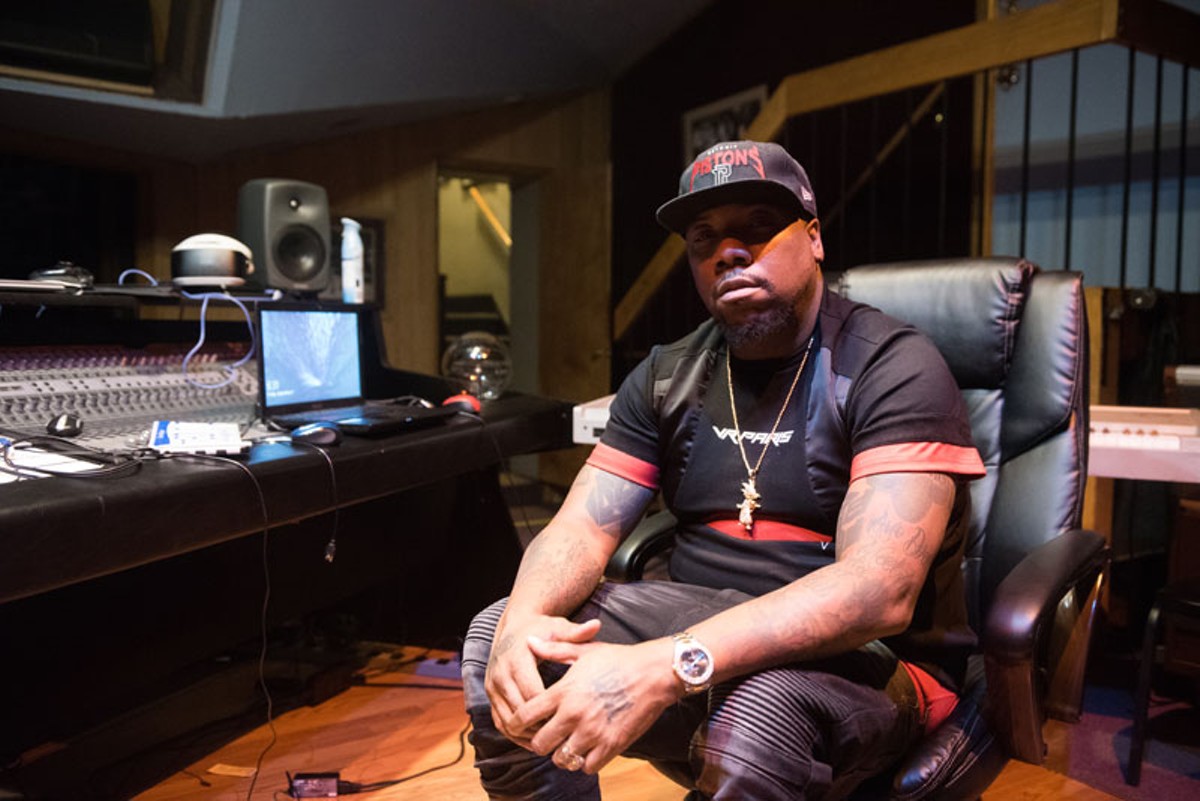 For 75 years United Sound Systems recording studio has occupied 5840 Second Avenue in Detroit. Musicians from bluesman John Lee Hooker, funk rebel George Clinton, and many of Berry Gordy's Motown Records roster have recorded hits within these walls. Although the equipment has been updated, the aura of the many musical legends can still be felt.

"Something is definitely in here. We hear noises sometimes," says acclaimed music producer Helluva. "One day I was walking in and I just knew I heard somebody singing. I thought my engineers were in here doing a session but when I got in here, nobody was around. This was right when Aretha Franklin passed. I think she might have sent her soul to do a little session."

There are perhaps few more deserving to be working the boards at United Sound than Helluva, who also goes by Helli Hanson. Over the last 20 years he's gone from a solid beatmaker, to local influencer, to the musical architect of Detroit's current street sound — often referred to as "Detroit trap." He's worked with everybody from Icewear Vezzo to, most famously, Tee Grizzley: In addition to the rapper's breakthrough debut single "First Day Out," Helluva is responsible for production of eight tracks on Grizzley's new album, Still My Moment. Some of the artists he hasn't worked with have found producers to do their best Helluva imitation. "I heard a track before and it sounded so my shit that I thought I made it," he says through a laugh.

Originally from the Southwest side of Detroit, Helluva credits his father, who was a keyboardist in a cover band, for giving him his first introduction to music. "He would do concerts here and there, but they would mostly play other people's songs," he says. "When I was younger I didn't understand that. I would ask, 'Why ya'll playing other people's songs?' And he would say, 'That's how I make my money.' I told him when I grow up I was going to make my own songs."

Helluva routinely experimented on his father's keyboards and started rapping, but street life temporarily halted his ambitions. "I dropped out in 9th grade. I don't know anything about high school except what I see on TV and movies," he says. "I just preferred to be in the streets. I got kicked out the school I was comfortable with where everybody I knew that I grew up with, and had to go to a new school. So I chose not to go."

Street life left little time for rapping and beat-making, but by age 21 Helluva knew it was time to change the direction his life was going. "It was all the streets until I started having kids," he says. "I had four kids back-to-back. And their mother didn't take care of them, so I had to take care of them. At that point I was stuck in the house 24-7 with my kids. I didn't have anything to do but play video games and make music."

By the late '90s Helluva made a name for himself among his peers by making beats for a group called City Click, and eventually started working with Rock Bottom. Helluva fell in love with Roland keyboards, and it became his weapon of choice when called upon to create a beat. "Back then you had to haul around your keyboard and MPC to studio to studio to studio," he says. "Now I just come in with my backpack and my laptop."

But it was with the group Made West that Helluva really made his presence known, both on the mic and as a producer. "They were a tight crew of street niggas from Joy Road doing street shit," he says. "One of my friends Twan was in the group. I didn't take them seriously because they was street niggas. I went to jail one time, and I called him and told him if he helped me get out of jail we could do that group thing."

Helluva contributed productions and lyrics on many of Made West's local anthems, including "Got It All Day" and "I Need My Doe." Around this same time Helluva produced the song that would dramatically increase his reputation and notoriety — "Take Money to Make Money" for Stretch Money. "That took it to a whole different level," he says. "After that, I started getting more recognition."

"Take Money to Make Money" was an instant hit on local FM radio and clubs. Helluva sampled San Francisco funk band Frankie Beverly and Maze's "We Are One" to create the soulful track that embodied the Detroit hustler spirit.

But even as Helluva's career was on a steady climb, he still didn't feel like he'd found his true sound. The beats were getting stronger but he wasn't carving out his own musical identity. "I decided to stop trying to sound like the industry sound and what's current, and just started making the sound I liked," he says. Helluva's sound became less sample-friendly and stayed away from industry trends. He used more arpeggiated keys, stuttered drums, and monophonic bass lines. His music began to evoke more tension and forced the emcee to match the musical intensity.

"I call it 'basement sound' because I make it in the basement," he says.

‘When you in Atlanta, L.A., and New York, you got every label and every industry artist out there. In Detroit, all we got is each other.’

Just as Helluva was developing his basement sound, he began working with a new group called Doughboyz Cashout — four emcees full of ambition and street swagger. "I was one of the first people to start working with the Doughboyz," he says. "Once they came out, a whole wave of more younger music started coming."

Doughboyz Cashout and Helluva's basement sound were the perfect combination. They racked up thousands of YouTube views and built an impressive local following. "After Doughboyz came, Detroit reached a point where we started being fans of ourselves," Helluva says. "Detroit people started to like Detroit music. All the other times we were making music, nobody really cared."

The local love that Doughboyz Cashout received was surprising because many Detroit artists at the time felt like it was easier to win over everywhere but Detroit. "When Doughboyz came out Detroit was like, 'This is hot, we listening to it, we don't care about what everybody else is doing or what everybody else sounds like,'" he says.

By 2015 Helluva again changed course. He moved to Atlanta to explore more production opportunities, but returned to Detroit less than 10 months later. "I went to Atlanta for a little while and they told me the Detroit sound was never going to make it out of Detroit," he says. "And when I came back to Detroit, within that first week of trying to find somewhere to live I met Tee Grizzley and we recorded 'First Day Out,' so I proved them in Atlanta wrong real quick," he says with a chuckle.

"First Day Out" led to Tee Grizzley getting a record deal with 300 Entertainment, and put Helluva on the map across the country. "I didn't know what was happening," he says. "I was on (Instagram) wondering why was everyone posting this song. Once Chris Brown posted it, it was really over. It was great to finally start to get that national recognition." 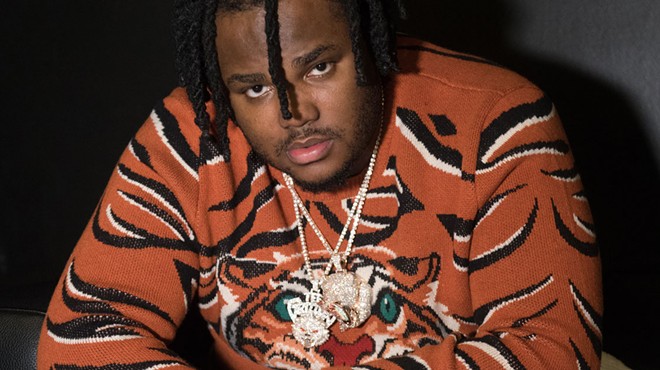 Although Helluva had never worked with Tee beforehand, he knew it was something he wanted to do. "I had been a fan of Tee, but they was like, 'He gone to jail and he ain't never getting out,'" he says. "So one day I get a call from this lady and she's like, 'My nephew made some songs while he was in jail, they're already written, and can you build a beat around these songs?' The rest is history."

Since then, Helluva has been working nonstop. He's produced tracks for big names like Future, Rick Ross, Kodak Black, Yo Gotti, and Young Jeezy. Although his stint in Atlanta didn't work out as he hoped, it did open his eyes to the true struggle of trying to make it big in Detroit.

"Now that I kind of have a foot in the door with the industry, and seeing what we was going through trying to get on, it seems harder than I thought it was for Detroit people to get on," he says. "Like when you in Atlanta, L.A., and New York, you got every label and every industry artist out there. In Detroit, all we got is each other."

But as tough as it may seem, many industry execs have predicted a hip-hop renaissance of sorts for the Motor City within the next couple of years, similar to what Chicago saw in 2012. Artists like Sada Baby, Molly Brazy, Chavis Chandler, Nolan, Team Eastside, and BandGang are just a handful of many artists that are leading the charge. "We need to start popping and getting this money because they was getting checks in Chicago," he says. "I would like to see that here. We starting to get that there."

Helluva says he would also like to see more camaraderie in Detroit. The boom-bap and trap emcees dwell in separate circles, while the artists that found most of their success in the '90s seem unwilling to embrace the younger and newer trap artists. He says when Royce Da 5'9" brought up Tee Grizzley's name in his "Rap Radar" podcast interview in March, it was good for the culture. "I would like to see Eminem acknowledge some of the street rappers too," he says. "To me it seems like we don't exist to him."

Outside of his musical goals, Helluva says he just wants to see Detroit be a place where young black men and women can thrive. "My vision is to see less black-on-black violence and more young people getting money," he says. "There's a lot of money out here and there are different ways you can get it. There's alternatives out here to doing something that will get you in jail or hurting somebody else's family."