By Travis R. Wright
Here’s what we know happened:

A 27-year-old Clawson resident, Saied Haidarian-Shahri (licensed to drive for only two months), reportedly lost control of his 2004 Honda Civic in the curve on Interstate 75 beneath the Nine Mile Road bridge. That particular stretch has a posted “suggested” speed of 50 mph, but we now know that Haidarian-Shahri was cruising at about 70. In the pocket of the curve, he veered into Michael St. John (44, of Armada), who was at the helm of a tanker truck carrying 9,600 gallons of gasoline and 4,600 gallons of diesel fuel. Upon impact, the cab separated from the tanker, which then crashed into the wall. Kaboom!

Despite at least two massive explosions — which resulted in the Nine Mile bridge collapsing onto the highway — there were no fatalities or serious injuries.

Ironically, I first heard about the accident from friends in Chicago and New York — then I went outside and stood on the front lawn from my home in Royal Oak and saw the menacing plume of smoke first-hand. At that time, the facts were still fuzzy.

Ferndale resident Chris Ramos (proprietor of the Night Move) was in his car on Nine Mile at the time, and, like any self-respecting photog, he had his camera on him.

This is his story: 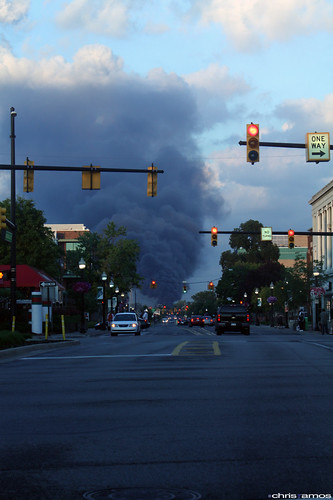 It’s amazing how quickly rumors become exaggerations and spread — forgive the pun — like wildfire. I was driving back from the grocery store when I saw the black, monstrous smoke cloud on East Nine Mile. Curiosity got the best of me, so I began what turned out to be quite the trek down the road towards the smoke. The weird thing was that each stoplight brought a new story of what was “really” happening.

The driver of a tanker is engulfed in flames! 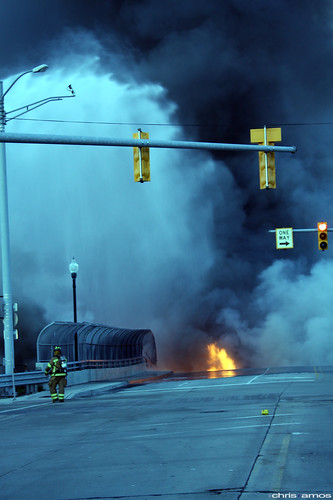 It took some time, but I continued to travel closer to the wreck, and when I was about a mile away I started to see the flames between the flashing lights of emergency vehicles.

The bridge collapsed with a fire truck on it! 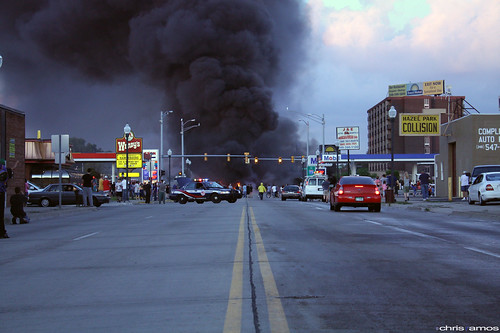 I drove as close as I could then parked my car, grabbed my camera and walked to the police line.

There’s a natural gas leak! Everyone get back! 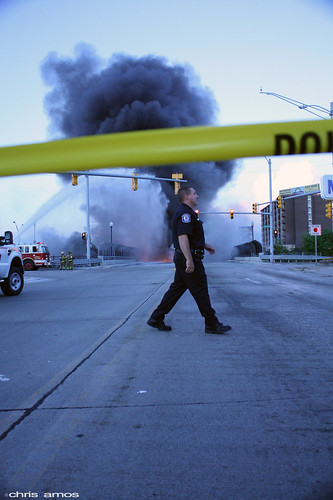 I’m not saying it’s nearly as intense or catastrophic, but the closer I got and the more I continued to snap photos I kept thinking about what it might have been like to see the towers exploding, smoking and collapsing right in front of you on that unforgettable day in September. I thought about all the rumors coming from the streets of New York as those monuments buckled and fell. 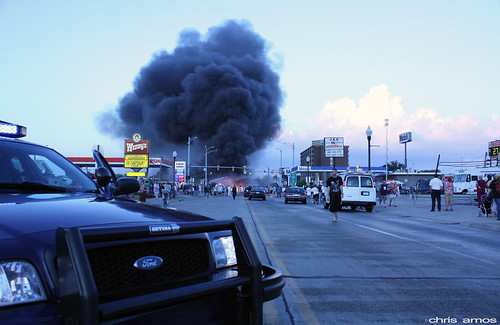 I walked closer, as close as I could get, then heard a loud bang and could feel adrenaline shoot through me — equal parts fear and excitement. I stood at the police line with a small crowd of onlookers, and watched as the thick dark smoke continued to spew from the ground straight into the air, filling it with odor and mood. I could see the fence that once lined the Nine Mile bridge — it was charred, bent and strange. 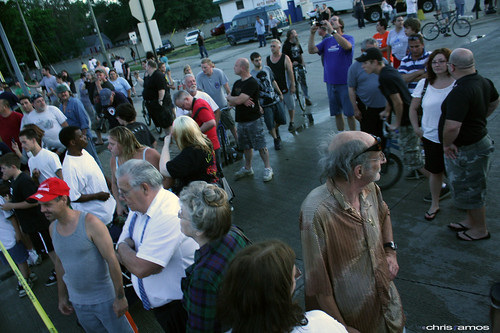 So, nobody was engulfed in flames, a fire truck was not on the bridge when it collapsed and the gas leak was anything but natural. So much for hearsay.

Still, absolutely phenomenal that everyone got out alive. 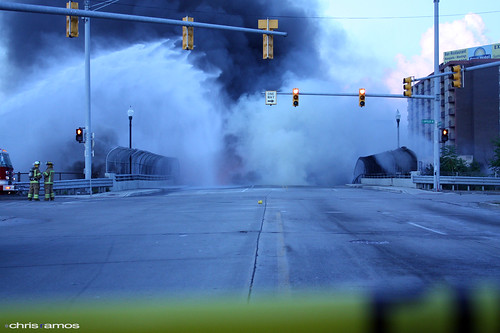 All photos courtesy of Chris Ramos