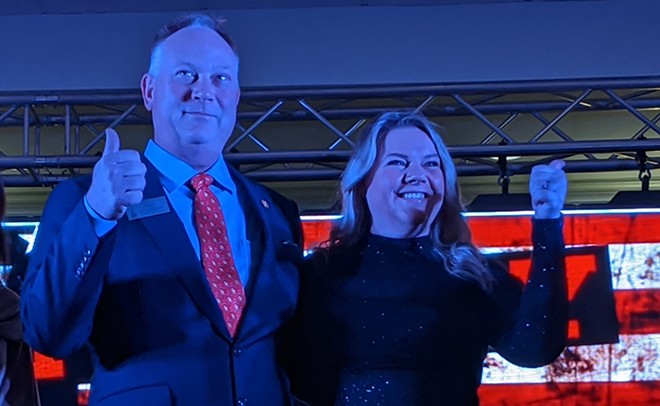 Bridge Magazine
Michigan Rep. Matt Maddock and his wife Meshawn Maddock, co-chair of the Michigan GOP, were among the 16 fake electors.

The Justice Department is investigating Republicans in Michigan and six other battleground states for posing as presidential electors and falsely declaring that Donald Trump won the election.

Michigan Attorney General Dana Nessel referred the case to the Justice Department and said last week that there’s “absolutely” enough evidence to warrant charges against the 16 Michigan Republicans who signed the false certificate.

The fake electors are accused of using fraudulent documents to subvert the outcome of the election.

“We’ve received those referrals,” Deputy Attorney General Lisa O. Monaco said in an interview with CNN. “Our prosecutors are looking at those, and I can’t say anything more on ongoing investigations.”

Monaco didn’t divulge details of the investigation but said federal prosecutors were “going to follow the facts and the law, wherever they lead, to address conduct of any kind and at any level that is part of an assault on our democracy.”

Michigan GOP Co-Chair Meshawn Maddock, who was one of the fake electors, told a crowd at a conservative gathering earlier this month that Trump’s campaign directed the party to organize the slate to declare him the winner.

Biden won the election in Michigan by 3 percentage points. But as Democrats gathered in the state Capitol to certify the election on Dec. 14, Republicans disregarded state law and held their own caucus with an alternate slate of delegates to “certify” the election for Trump. They tried to enter the building but were stopped by the Michigan State Police.

In the certificates, which they sent to Vice President Mike Pence, the Michigan Secretary of State, the National Archives, and the chief judge of the western district of Michigan, the Republicans falsely claimed they had signed the documents in the Michigan Capitol.

The stunt was part of a larger effort by Michigan Republicans to attempt to reverse the outcome of the election.

In late December, Maddock's husband, state Rep. Matt Maddock, R-Milford, joined Daire Rendon, R-Lake City, in a federal lawsuit filed by Trump supporters to challenge the results of the election. The suit asked a judge to allow lawmakers to certify states' election results, a move that would enable the Republican-led Michigan Legislature to reject Biden's victory. But a judge turned down the suit, calling their arguments "flat-out wrong" and "a fundamental and obvious misreading of the Constitution."

A day before the Jan. 6 insurrection, Matt Maddock and 10 other Republican lawmakers from Michigan wrote a letter to Pence, urging him not to certify the election, questioning "the validity of hundreds of thousands of ballots" in battleground states.

Courts, local and state officials, and even members of the Trump administration have repeatedly said there is no evidence of widespread fraud.

Meshawn Maddock helped organize and promote buses of supporters from suburban Detroit to Washington, D.C. for the Jan. 6 rally.

Fourteen Michigan residents have been charged so far for participating in the insurrection.