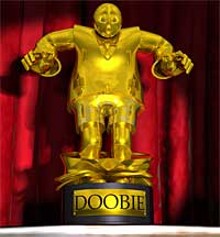 “You want fries with that, you pouch-bellied fat fuck?” Some wiseass with a sense of humor, and a talent for stealing airwaves, hassles customers and management at a Troy Burger King by taking over as the voice of the drive-through squawk box. He tells people they’re too fat to be asking for a Whopper, cusses and cracks wise, and orders the manager back inside when he comes out to investigate, saying, “There’s nothing you or the police can do about this, so get your fat ass back inside and take your goons with you.” The feds get into the case, with Federal Communications Commission investigators swarming all over the air piracy case for a while, then going away.

Crack and Geritol: Curtis Beeks Sr. has a great cover until Grand Rapids vice cops pick him up and charge him with dealing crack — he’s an 80-year-old grandfather with legs so stiff they can barely carry him into the courtroom for arraignment. Grandpappy Crack bonds out while seasoned cops shake their heads in befuddlement. “How the drug business has evolved, there’s not a whole lot that’s surprising anymore,” Lt. Richard Nawrocki, head of the vice squad, tells the Associated Press. “But that is surprising.” He vows that the octogenarian desperado will get no breaks, just because he’s old enough to put Nawrocki over his knee.

Dial Em for “misogyny”: Eminem is anonymously ratted out for recording a racist rap way back when he was a mere pink-and-white rapling named Marshall. Three “white kids from Detroit” take the unreleased recordings to The Source magazine, which — in an ongoing feud with Em — publishes the lyrics. Seems the breakup of a relationship sparked his inner racist to write some pretty nasty stuff about sisters. Em releases a prepared statement accusing the magazine’s CEO and another rapper who’s cozy with The Source of “spitting in the face of what hip-hop and rap music have done to promote,” er, ah, “racial unity.”

Phat city: Finally, a national publication sits up and takes notice of Detroit, rushing it right to the top of a list of America’s largest cities — largest waist sizes, largest asses, largest appetites. Men’s Fitness magazine names Detroit the fattest city in the country, edging out Houston for the No. 1 spot in the smugly well-toned periodical’s sixth annual lard survey. “This is one championship title I don’t mind giving up to another city,” says Houston City Councilwoman Carol Alvarado. “Congratulations, Detroit.” Up yers, Carol. Our own, self-described “big ole mayor,” Kwame “Refrigerator” Kilpatrick, blames his city’s avoirdupois on its rides. “We’re not a walking city,” Big Man says. “We love our cars.” Those skinny, skin-cancery, pineapple-eating assholes in Honolulu come in as the leanest of the 25 cities on the list.

Springtime for Orvie: In one of the unlikeliest adaptations of a real-life character’s story for the legitimate theater, Dearborn celebrates its 75th year as an incorporated city with a musical comedy about its longtime, flamboyantly racist boss, Mayor Orville Hubbard. Former Detroit News reporter and editor David Good, the late Hubbard’s obsessed biographer, says he wrote the musical Orvie! because the nasty little man “was such an interesting, bizarre personality. He would say anything, do anything for publicity” — and, to keep Dearborn as white as the Wonder Bread on a boiled ham sandwich. “One of my goals is to have people acknowledge Dearborn’s racist past,” Good tells the Freep. Hubbard, still dead, was highly concerned with the mongrelization of towheads and other master race notions — a laugh riot.

So long, it’s been good to know ya: One of southeast Michigan’s pioneering environmental groups, the Lake St. Clair Advisory Committee, disbands after 36 years of fighting the good fight for the heart-shaped bulge in the Great Lakes chain. “We’re burned out,” committee chair Don Gunning tells The Detroit News. “We only have seven or eight active members.” It exits fighting, going after a moneymaking proposal by the state to allow bass tournament fishermen to catch and release smallmouth bass before the opening of the season, while the fish are sitting ducks on their spawning beds.

Hug this: In an optimistic move that hinges on regional cooperation, Detroit Mayor Kwame Kilpatrick proposes building a more than $1 billion, 1 million-square-foot replacement for Cobo Center that might rely on a regional sales tax as a funding source. “As a first step, we have determined the funding and operation of the convention center must be governed by an authority, not a city,” the mayor says. “The time has come to embrace each other and for the good of our city, our region and our state, master the art of the deal.” Leaders throughout the metropolitan area do a credible job of masking whatever enthusiasm they might have for the spectacularly costly proposal — or for group hugs.

Chapter and worse: A much-touted redevelopment plan that was to restore the Book-Cadillac Hotel to its one-time magnificence in time for the 2006 Super Bowl heads south, as so many schemes had before, when deep-pockets, Dallas-based Kimberly-Clark backs out of the $150 million deal. Gone were the hopes for a fully renovated, 485-room hotel, bolstered by new apartment or condo space. The K-C subsidiary Historic Hospitality Investments blew hot on the project when grandly announcing its plan six months before, then blows cold due to underestimating construction costs by a full 20 percent, or $30 million. With that, the developer changes its tune from “Hello, Detroit,” to “Better luck next time.”

Loons on the lake: “In some cases, it does get frustrating. Our job is to rescue people and save lives. But at some point, there needs to be some forethought on the part of the people on the ice to make a decision that maybe it’s not good to go.” Thus spake St. Clair County Sheriff’s Lt. William Krul, after having to pull 15 people in one day off drifting ice on Lake St. Clair. An extremely diplomatic Krul tells the Freep his rescue unit’s concern is not the very expensive deployment of manpower, emergency equipment and everything else needed every time some pea-brained fisherman gets caught out on weak ice, but “to make sure they are brought back to safety.”