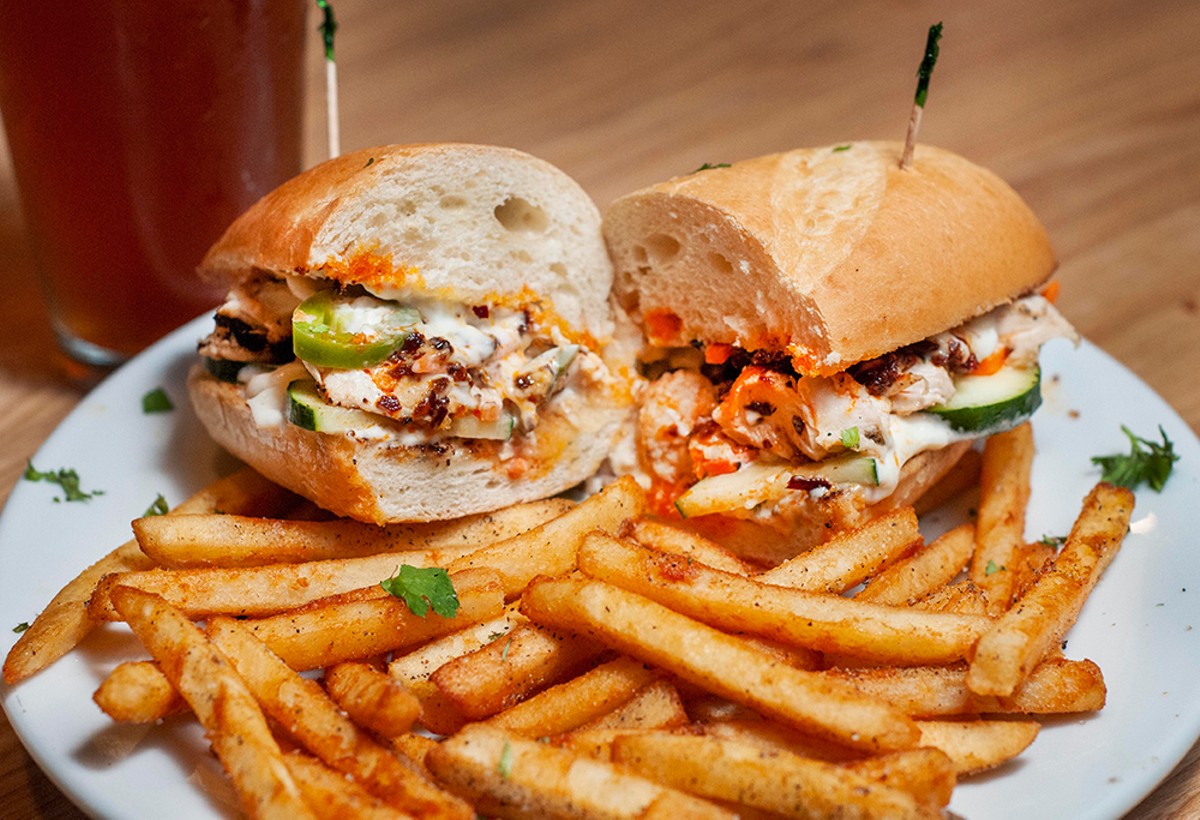 Despite that Motor City Brewing Works has described the kitchen at its Midtown taproom as "an afterthought," it managed to make a name for itself with its awesome brick oven pizzas topped with items like pear, fig, and gorgonzola. For some, the pizza is the main reason to visit, and the beer is merely the afterthought.

That's a notable accomplishment as brewery fare is more often than not a pretty flat genre and formulaic — riff one way or another on new American cuisine, add some flare from around the world, use a few local ingredients, pull together a decent presentation, and there it is. The cuisine is fine for accompanying a beer, but it's not really what's motivating me to leave the house.

At its new location on Detroit's Avenue of Fashion, Motor City built out a larger kitchen that allows an expanded menu, and it's intentionally aiming to make the shop as much of a dining destination as a brewery. Does it succeed where so many others have failed?

While the pizza is still there, ribs, sandwiches, tacos, crab cakes, and more are also rolling out of the kitchen. Motor City makes among its best dining destination cases with its banh mi, which arrives with chicken that's marinated and cooked sous vide before being grilled, a two-step process that keeps it moist and tender with a nice char around the edges. The bird is set on a big, soft french roll with an interior that's lightly grilled. It's packaged with crunchy pickled carrots and jalapeños, cucumbers, cilantro sprigs, a healthy dose of mayo, and chili crisp. No funky pate that I love in my banh mi's, but it's well-balanced and a nice change in flavor profile from the sandwiches at the Vietnamese restaurants in Madison Heights.

Combine the previous two items — the banh mi and the fried chicken sandwich — and you get perhaps the menu's best dish, even though it's not on the menu. A co-diner asked if we could substitute the fried chicken for the banh mi's bird, and that's since been the go-to. No disrespect to the sous vide, grilled chicken — it's excellent, flavorful, and undoubtedly more healthy — but the fried chicken just works so well with the banh mi's generous slather of mayo and acidic punches from the pickled jalapeño and carrot.

Though I'm usually partial to a burger with a thick patty, the double burger with two smash patties offer thin discs of beef charred around the edges and juicy inside, as they should be, and they're sandwiched between toasted brioche bun with a good balance of lettuce, tomato, onion, sweet pickles, and "secret sauce." It's a worthy burger.

The baby back ribs are dry-rubbed, with a medium amount of meat that's super tender, moist, and lightly charred, and the package is served atop a bed of krinkle cut fries. After initially resisting the tacos because I'm skeptical of tacos made at a brewery, I was rewarded for capitulating with a dish of big, buttery shrimp wrapped in flour tortillas with a garlic aioli and slaw composed of poblano, red pepper, and jalapeño. The crab dip is made with real crab meat, cream cheese, parmesan and hunks of roasted red pepper and jalapeño, with a warm baguette as the vessel.

Still want the pizza? The list of house pies is a bit shorter than the Midtown location (no pear and fig), but it's got winners like the Godfather pizza with its thick layer of fennel-studded sausage, goat cheese, roasted red pepper, and tender cloves of roasted garlic. Mash the latter up to get more mileage out of it. The slightly sour, slightly chewy crust holds the pie's excellent flavor profile together. We asked for red sauce instead of the pesto that comes on the Godfather, and that may have been a mistake.

The Ghettoblaster Ale and Lager, honey porter, nut brown ale, and other beers that Motor City made its name on are all there, as are some small-batch, new additions, like the Sherwood Porter, a nod to the adjacent neighborhood.