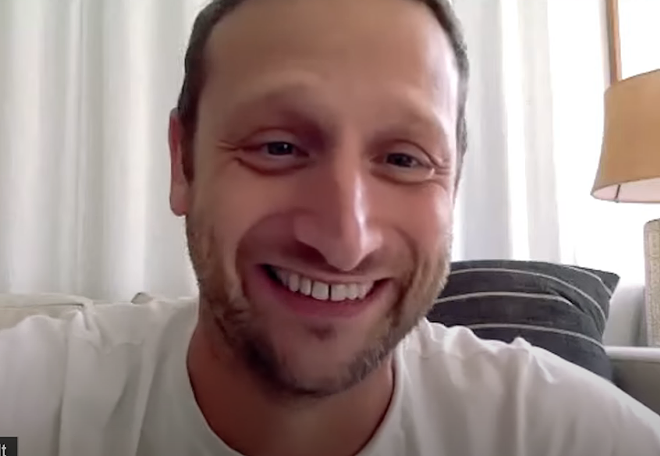 On Tuesday, social media, music outlets, and people who for some reason still think it's cool to quote Zach Braff's Garden State were all aflutter because the Postal Service (the band) appeared to be up to something.

Could it be? New music from the band that famously dropped 2003's critically acclaimed and highly influential Give Up and then just fucking bounced? After all, much of what the trio was riffing about in 2003 hits just as hard today, if not harder.

“I wanted to walk through the empty streets/ And feel something constant under my feet/ But all the news reports recommended that I stay indoors/ Because the air outside will make our cells/ Divide at an alarming rate until our shells/ Simply cannot hold all our insides in/ And that's when we'll explode,” Gibbard sings on “We Will Become Silhouettes”.

Or take “Sleeping In,” where Gibbard paints a dream world that is “exactly how it seemed,” global warming, and all: “Where concerns about the world getting warmer/ The people thought they were just being rewarded.”

Well, shit. On Wednesday, the mystery has been revealed and it's not new music. Turns out it's just a big fat goof and, well, a really cool, star-studded voting PSA made in collaboration with the voter participation organization HeadCount.


The 18-some minute-long “Make Your Vote Count” campaign video is led by the Postal Service and fictitious SubPop representative, Dave (played by Jon Daly), who insists that the future success of the band hinges on adding 40 or more additional members or “two and a half Polyphonic Sprees” because no one wants to see “three dorks bopping around onstage.”

Detroiters star and creator of the Netflix show I Think You Should Leave, Tim Robinson makes an appearance as Frank Schøttendt, mainlining his brand of awkward gaslight comedy into the crowded Zoom audition about halfway through.

“I manage a band called the Alan Door Band, which has 18 members. I'd say that covers a lot of ground,” he says.

“I'll give you 18 strangers who are rowdy,” Robinson, er, Schøttendt promises. “These guys, they like two things. They love rock 'n' roll and they love arson. Am I off base in thinking that's a perk?”

Gibbard weighs in: “So off base.

Ultimately, Schøttendt does not make the cut.

But the unsuccessful audition doesn't mean it's all bad blood between Robinson and frontman Gibbard.

Earlier this year, Gibbard honored Robinson during an episode of his “Live From Home” quarantined YouTube series, where he performed his own tunes as well as notable covers by the likes of Radiohead and Phoebe Bridgers. However, Twitter straight-up lost its shit when he performed a strangely emotional rendition of Robinson's skeleton-heavy, Johnny Cash-inspired jam “The Day That Robert Palins Murdered Me” from I Think You Should Leave.


Robinson isn't the only Detroiter to get in on the pro-voting fun. A co-creator of Detroiters and Veep star, Sam Richardson will be appearing virtually alongside Sen. Gary Peters to stump for the Joe Biden and Kamala Harris ticket on Thursday, Oct. 8. According to a press release from the Biden camp, the event will invite Michigan brewery owners to discuss the failure of the Trump administration on behalf of small businesses impacted by the pandemic.

In March, both Richardson and Robinson donated to Planet Ant — Hamtramck's community comedy, improv, and performance space where they both got their comedy legs — to help with operational costs and staffing pay as they suffered the early and long-lasting impact of the pandemic-related closure.

Anyway, watch the Postal Service PSA below and remember: “Now we can vote any day in November” (just as long as it's Nov. 1, 2, or 3).