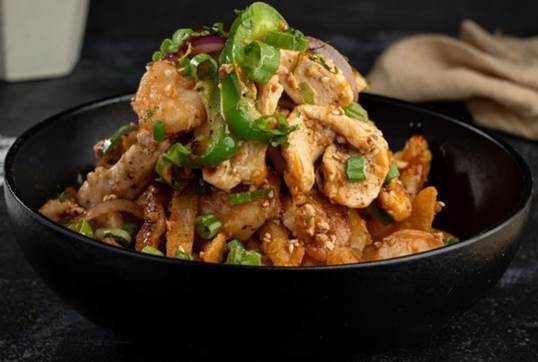 As Detroiters we’re used to our fries coming smothered in chilli and cheese, but what about buffalo chicken, chicken parmesan, or Philly cheesesteak?

Enter Spudz & Clucks, a new restaurant that opened over the summer on Detroit’s Westside. The fast-casual restaurant offers, you guessed it, a variety of fries and chicken options that go beyond traditional servings you might be used to.

"It is very rewarding to serve our customers with high-quality wings, hand-dipped chicken tenders and next-level loaded fries. We’ve worked non-stop with our team to develop the menu with flavors that will resonate well with chicken and fry fanatics,” Malik Hairston said in a press release. “Beyond the culinary aspect and as a group of minority entrepreneurs, we are also striving to boost the number of minority-owned culinary businesses within our community.”

Some of Spudz & Cluck's menu items include Samurai fries, fries loaded with your choice of meat, seasonal vegetables, tossed in a garlic butter sauce, and the Breakfast Butter Clucker sandwich, a fun twist on traditional chicken and waffles.

Spudz & Clucks is located at 18456 Grand River Ave. in Detroit. For more information including hours and a full menu, visit spudznclucks.com.