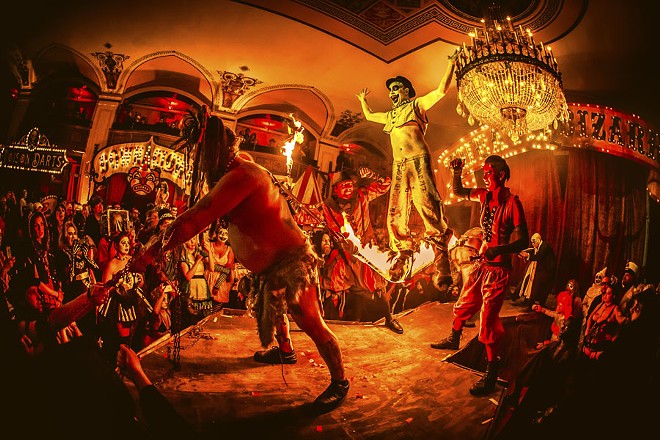 Trever Long
Theatre Bizarre has, once again, been cancelled due to pandemic-related concerns.

According to a post made Tuesday, organizers said though they "wanted so badly to return to the temple and revel once more," but unfortunately, "fate had other plans."

"The undertaking of throwing the Greatest Masquerade on Earth is gargantuan," the post reads. "Booking and organizing performers, assembling crew, recruiting volunteers, building sets, not to mention acquiring the tomes and artifacts necessary to summon Zombo from his dreamless oblivion; all of these things take considerable time and resources."

Organizers say that, on a good year, the massive effort usually is underway by the second week in January and, by summer, hundreds of jobs would have already been assigned, performers booked, and the event's elaborate and thematic staging would be in the works.

However, due to lost time in preparing both physically and financially for last year's event (which organizers canceled in early May), the Theatre Bizarre team realized that they were not going to be able to deliver the quality event we've come to expect in years past, which has been nothing short of immersive, transportive, and downright disturbing. (Google: Fistitorium. Or better yet, don't.)

"But take heart; nothing is forever," the post reads. "As Zombo slumbers another season, he only grows stronger, and when he does finally reawaken, we'll be joined together again in a great bacchanal that shakes the dead from their graves!"

Since 2011, Theatre Bizarre has transformed Detroit's historic Masonic Temple into a mischievous hedonist hellscape akin to an immersive R-rated — or in some cases, X-rated — choose-your-own-nightmare.

This year's solemn message from organizers, however, comes with a ray of light veiled as a friendly threat.

"This gives you all another year to perfect your costumes," the post reads. "No excuses next year!"

To see just what won't be going down again this year, browse our photos from 2019 and 2018. And as always, Hail Zombo.