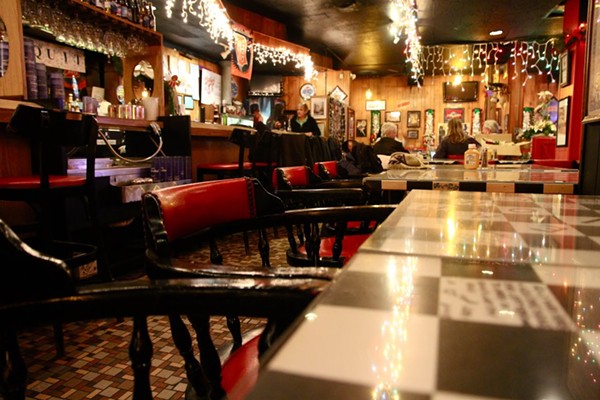 Buzz has been building about Checkers Bar & Grill, a downtown hamburger joint on Cadillac Square that has seen better days. For years, it was an increasingly tired little bar and grill that attracted a tiny lunch crowd, despite its prime location. The good news is that the same owners who reinvigorated Foran’s Grand Trunk Pub downtown now have the keys to Checkers, Dave Gregory and Tim Tharp. “We’re doing a few soft openings here and there,” says Gregory. “Just open the doors and serve drinks — but it’ll be two or three months before we’re keeping regular hours.” What’s the plan? Gregory says, “We do plan on keeping it Checkers, because it has more than 50 years of history as ‘Checkers,’ but we do plan on some upgrades. We’re going to upgrade the kitchen, change the decor a little bit. We don’t want to lose the old grunginess, but we do want to update it a bit. We want to make it famous for its burgers again. It’s not going to be a fast turnaround. It’s going to be a step-by-step thing: As money comes in, you’ll see improvements throughout the years.” Since Michigan craft beer played such a central role in Grand Trunk’s popularity, what will be at the bar? “We plan on focusing on craft world beers,” Gregory says. “At Grand Trunk, we’ve been Michigan-specific, and so as not to compete and to complement, we’ll feature a fantastic beer menu from around the country and around the world.” We’ll drink to that!

Speaking of Side Dish