In Japan, restaurants tend to specialize. A walk-up might offer only takoyaki — octopus balls. I visited a Tokyo tonkatsu restaurant in 2017 that served nothing but flawless deep-fried breaded pork cutlets, night after night; they'd honed the technique. A ramen restaurant will have spent hours of effort perfecting and maintaining its broth.

An izakaya is less specialized, though it's not "anything goes"; it's more or less a pub, with emphasis on the alcohol, relaxing after work, and sharing round after round of small plates. Fried food, especially chicken, abounds.

Bash Izakaya moved into the former Izakaya Katsu, a short-lived concept in Detroit's Woodbridge neighborhood that closed in 2019. Apparently Bash's owners Tom Myers, Benjamin Nolan, and Adrian Roman felt a Japanese restaurant without sushi was a non-starter in Detroit (and sushi is sometimes seen at Japanese izakayas, too). Thus its two menus: the "main menu," which takes an inclusive approach, with ramen, udon, and tonkatsu, as well as gyoza and croquettes and other deep-fried favorites, though no chicken, and the sushi menu, with a long list of rolls, many of them American favorites like California roll and Philadelphia roll. There's a good amount of cream cheese.

On my first visit a plurality of the dishes were decorated with maraschino cherries, but apparently they'd been used up by my second time there. One of them, the tonkatsu, served on a mesh grill, did not reach the exalted standards mentioned above, but its half-inch of pork had a good thick crust, served with shredded cabbage and plain rice. This would be a good dish for the person intimidated about trying Japanese food, somehow dragooned to Bash by friends.

The chashu ramen, a big bowl, was light on pork belly and tasted more of seaweed, with very thin, soft noodles. The cold chashu appetizer (with cherry) tasted mostly of soy sauce. Usually pork belly is one of my favorite things, so I don't know what happened to that shipment. 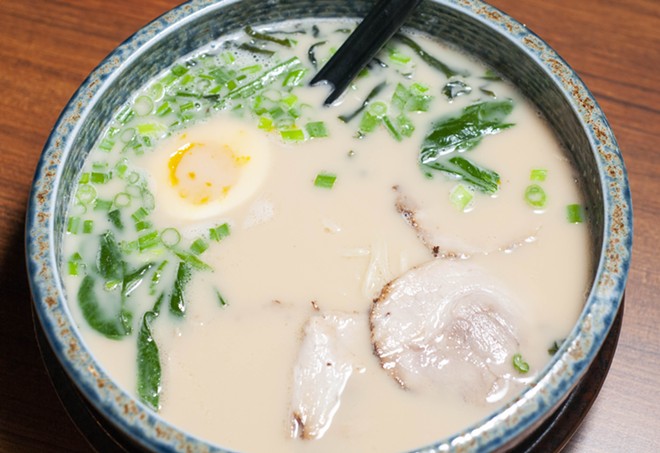 Of the traditional appetizers, the pork gyoza were admirably crisp without and chewy within, and eight shrimp shumai were remarkably similar to the same dish I'd just eaten in a Chinese place — tasty inside, rubbery wrapping. The best order-for-the-table appetizer was the takoyaki, a bargain at eight perfectly round pieces for $12. The outer shell is crisp, the inner batter is meltingly soft and the octopus itself is chewy. The balls (it's a shape, not a body part) are topped with generous kewpie mayo, bonito flakes and takoyaki sauce. Other batter-fried dishes, to soak up all that Sapporo, are tofu (it's not always a health food) and mashed potato/vegetable croquettes.

We went somewhat subtler with a spicy salmon roll, a spicy tuna roll and a spider roll, the latter for the crunch of the soft-shell crab and the eel sauce. It does include the misleadingly named "crab sticks" but who can tell, with all the rest that's going on? The spicy rolls are both spicy and saucy.

A friend who'd spent 14 weeks in Tokyo came with us to Bash. He was a frequenter of izakayas there when not working 60-hour weeks. (True story: In that city the late-night drinking culture is so well prepared for that you can call a cabbie who will drive you and your car home for you, the taxi driver returning to his vehicle on a motor scooter he's brought along for the purpose.) Not surprisingly, my friend found the Bash sushi not on the level of "any hole-in-the-wall sushi spot" in Tokyo, but decent for Detroit.

Dessert is five kinds of mochi (a sticky rice dumpling) filled with ice cream. I liked the green tea flavor, which was stronger than most. It's served with whipped cream... and a maraschino cherry.

Bash has an all-wood design, as in Japan, and includes a "tatami room," really a tatami area, though it doesn't include the woven straw tatami mats the Japanese revere. You take off your shoes anyway, and sit at traditional low tables, with wells below for your legs.

Bash makes it easy to sample a range of sakes, with two-ounce tastes for $2 to $6. I am not qualified to opine, but the descriptions promise herbal undertones, fruit-forward flavors, and notes of pear, melon, and vanilla (not all in the same sake). The "quick finish" on a Gekkaiken did not finish fast enough for me, I'll admit, but don't listen to me. I switched to a tart "Mandrin" cocktail that included blood orange, garnished with a grapefruit peel stamped "BASH," and was very happy. Our server said it was way popular. It's worth noting that the Bash servers are exceptionally cheerful and sweet.